Curtis Jones has opted to don the vacant No. 17 shirt at Liverpool from next season, which is a nod to his expected increased role within Jurgen Klopp‘s side.

The 19-year-old started and made his career breakthrough with No. 48, which is in line with the club’s philosophy of those in the academy donning the higher kit numbers.

But after settling into Klopp’s senior side this season and making the necessary steps to be considered a first-team option, Jones has now opted for a change.

He will switch from No. 48 to No. 17, a squad number last worn by Ragnar Klavan until the end of the 2017/18 season, but more notably was one worn by two prominent Scousers in Steven Gerrard and Steve McManaman.

Jones, who grew up in Toxteth, has had a memorable campaign to date as his humble goal of just getting “some minutes” in the Premier League in pre-season has turned into one which he has stamped his arrival in the senior side. 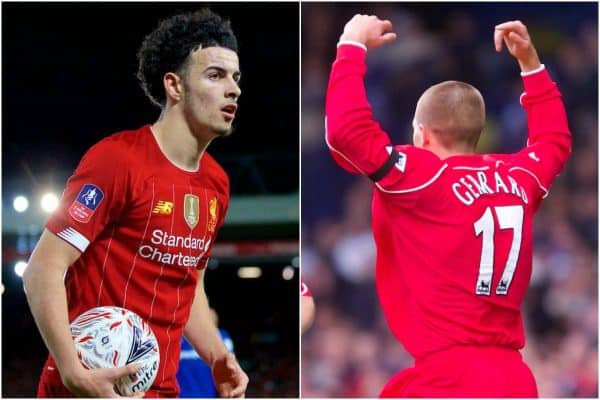 He became the club’s youngest-ever captain in the FA Cup win against Shrewsbury at Anfield, scored a winner in the Merseyside derby, notched his first league goal and made his first Premier League start – and recently penned a new five-year contract at the club.

There are high hopes for the youngster but ones which Klopp has been eager to offload to allow him to grow without the weight of expectation, but he is one who is expected to benefit from Liverpool’s desire to “create transfer internally” this summer.

Gerrard wore the shirt for over four seasons before switching to No. 8 and it’s symbolic that he now follows in the footsteps of his childhood hero and former under-18s manager who helped mould him into the player he wants to be.

“A lot of people didn’t see the work both of us put in to push me on to get into the first team,” Jones said in an interview last year. “Things weren’t always easy, but he was the perfect person at the perfect time to help me.

“He was the main coach who really told me what I had to work on. It was my all-round game, but also my all-round person. He knew the talent I had and put the fine details to me.”