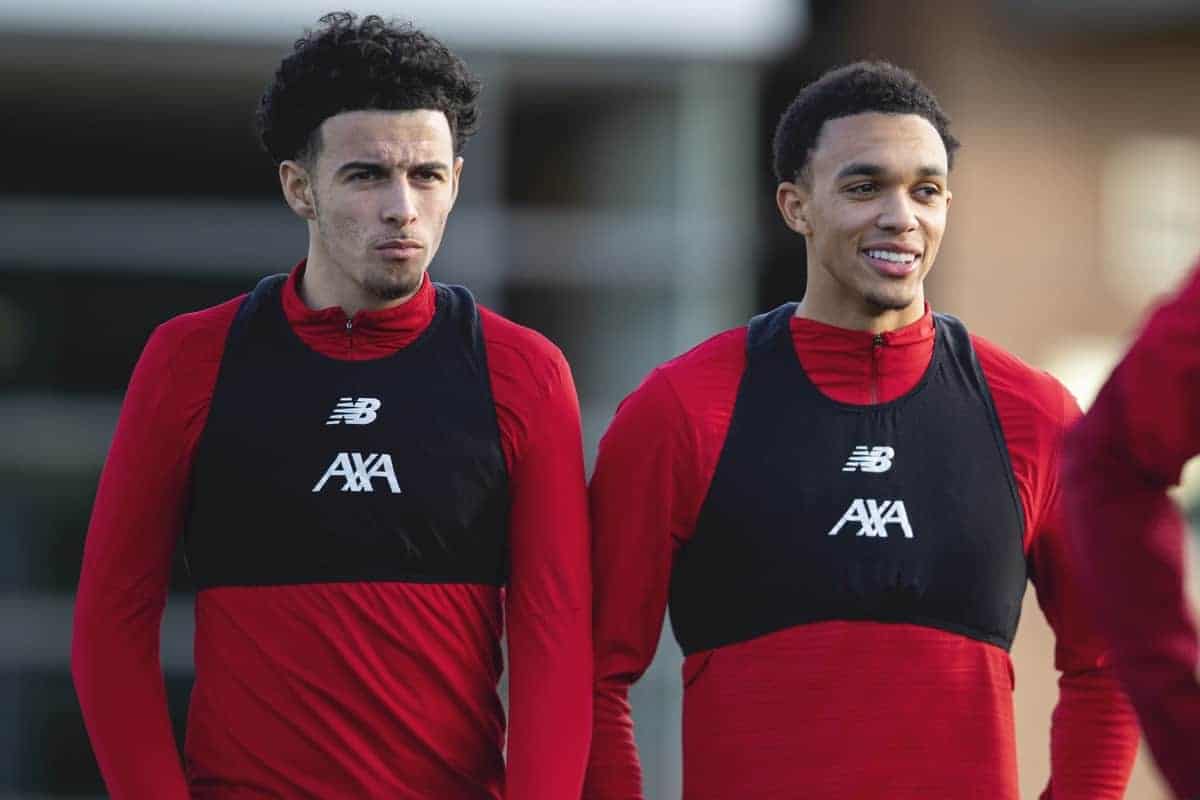 Jurgen Klopp has outlined his dream of Liverpool calling upon “a team full of Scousers” in the next 10 years, praising the qualities of the club’s local players.

The manager has long acknowledged the importance of drawing on players from the Merseyside area, and now he has two as regulars in his matchday squad.

Trent Alexander-Arnold is established as first-choice right-back at 21, and the 19-year-old Curtis Jones scored his first Premier League goal at the weekend, in his third appearance in the competition.

With Jones having signed a new five-year deal with the Reds on Saturday, the plan is to integrate him further as the second ‘Scouser in our team’, while Wrexham native Neco Williams and Surrey-born lifelong Red Harvey Elliott are also set to follow him.

Speaking ahead of the trip to Brighton on Wednesday night, a game that could feasibly see one or both of Jones and Williams making their full debut in the league, Klopp was asked about whether local players can always break through.

“I don’t know if it will always be possible, to be honest,” he said.

“I think it’s a bit easier for the London clubs, because I’m not sure if you have to come from Chelsea directly to be a ‘local lad’ or whatever, or if it’s allowed that you are from another part of London.

“But we try, we try. What we want to be is the spot for everybody with a Scouse soul, where he wants to play.

“It’s not a competition with Everton or whatever, that we can do one or the other, but we want to be [the destination].

“If you love football, if you are talented, if you are ready to work hard, then we want you to be here.

“But for that, we need to show the boys that there is a way through.

“Maybe not for the kids, the very young ones it’s enough that we have a nice shirt and that we are Liverpool, but then when they get older, we have to show perspective. That’s our responsibility.

“It’s really nice that the boys are now so close to it, that Trent made it, that the three others are really close to getting through.

“That’s an important sign for all the other kids around, that this is a club where you can have pretty much everything.

“You can play together with world-class players, you can train together with them and if you can make sure that you improve as much as you can, then the club is ready to give you a chance. That’s a very important message.

“That it will always be the case, that depends on the boys.

The pathway to the first team is arguably more difficult due to the world-class players already cemented in starting roles throughout Klopp’s squad, but the presence of these senior talents should also be seen as a positive.

For now, it creates the “perfect scenario” for the manager, instilling the ethos required for players like Jones and Elliott to reach the top.

If they do so, with Alexander-Arnold a prime candidate as future captain, it would aid Klopp’s dream of a “team full of Scousers” in the next decade.

“We only have the boys here, not because they are nice, humble, good-looking, whatever; they are here because we want to [use them],” he continued.

“That’s how it is and that’s how you do it with your kids and all that stuff.

“So what pleased me most about it is that the boys are so humble and so hardworking in that age group.

“The perfect scenario is that we have these role-model professionals around, these slightly older guys, that just show how you have to be if you want to make your way.

“If the boys follow this path, with the talent that they have, it’s pretty likely that they will have a proper career, so that’s good news.

“We need luck, injury-wise, stuff like this, but here we will always try to use them as often as possible.

“The dream is, and it will not happen in the next five years, but maybe in 10 years it would be great if we could have a team full of Scousers. Why not?

“Because that’s not a bad thing to be a Scouser, it’s a good thing. They are hardworking, they will fight like crazy, so a few things are really nice already in the characteristic of a Scouser.

“So good, but the door is open as well for all the other boys who want to play football, good football.

“Liverpool is a very, very open-minded club, so it doesn’t have to be 10 Scousers, but if they are around, no problem with that.”