Jurgen Klopp is currently 53 and with four years left on his contract with Liverpool, but beyond that, he has “no plans” at this stage, with retirement a possibility.

The Reds manager has been candid about his aims to retire relatively early, having moved into his profession at just 33, when he took over at Mainz.

He has enjoyed a long and successful career so far, with the Premier League title his crowning achievement, and the prospect of a dynasty to build on Merseyside is growing more likely.

With Klopp’s contract with Liverpool due to expire in 2024, it could well be that this is his last job—particularly at club level, as he outlined his career plan in an interview with the Mirror.

“I don’t see me doing that at that age,” Klopp said when asked if he could emulate Roy Hodgson and work into his 70s.

“When I became a manager, I thought…‘right, now 25 power years start’.

He continued to explain that he is hoping to find an “inner mood,” due to his achievements, that would allow him to ride off into the sunset.

“When it is time, hopefully I am still healthy and I can say, ‘great, I loved it, but now I would like to watch other people doing it’,” he said.

“So I hope I find this inner mood to say, ‘see you later, I wish you all the best, best of luck, love you all but don’t call because of any football matters’. That’s the plan.”

Klopp’s high-profile position at Liverpool, and his many duties as manager of the best side in the world, are undoubtedly draining, and he added: “I love it but what I want say is that I will not miss that.”

“Not being able to live a normal life is the shadow part,” he continued. 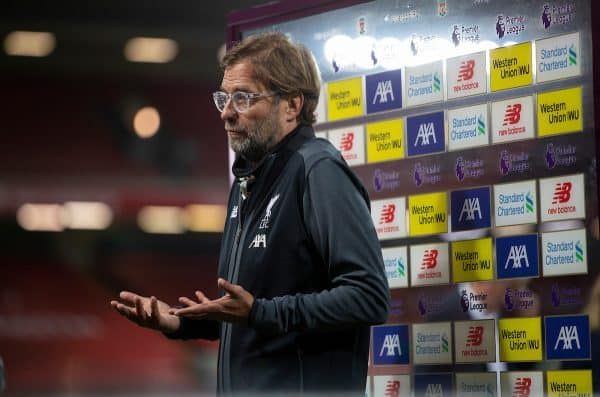 “I don’t like it but I have to accept it, [because] my life is too good. I am 53, I am healthy, I work for the best club in the world, I earn really a lot of money.

“Life is not perfect but it’s not for anybody so why should it be for me?”

It should be no surprise to see Klopp leave Liverpool in 2024, by which point hopefully the Reds have won many more honours, but his clear affinity with the club and the city ensures a question mark remains over his decision.

But if he does depart, it would come with the blessing of the Kop, as a manager who has achieved what so many others tried and failed to do over the past 30 years.