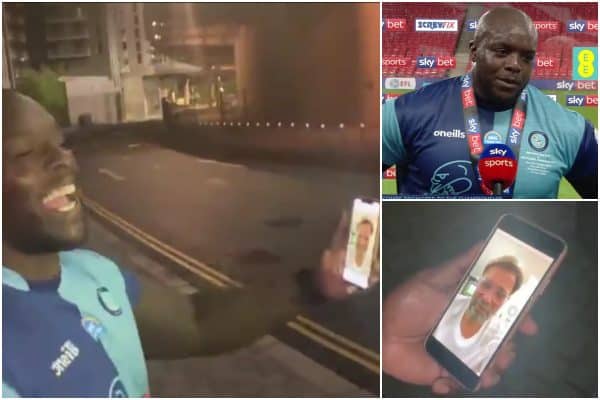 Wycombe striker Adebayo Akinfenwa pretty much had the best day on the planet yesterday: won promotion with his club, then got a video message off Jurgen Klopp to congratulate him.

At Wembley on Monday, Akinfenwa’s Wycombe beat Oxford United to seal their place in the Championship for the first time.

It was a case of coming full circle for the Liverpool-supporting striker: four years ago he scored in the play-off final for AFC Wimbledon knowing he’d be released from his contract while the team was promoted and, in his post-game interview, asked any managers looking for a forward to get in touch.

This time around was the opposite: the 38-year-old is still under contract for another year and is loving life as much as any other Reds fan this season—so instead said in his interview on the pitch that the only manager who could contact him this time was Jurgen Klopp!

What followed was something which even a veteran professional footballer could get justifiably excited about—the Premier League title-winning boss did exactly that.

Sending a video message on Whatsapp, Klopp congratulated Akinfenwa for earning the step up:

“Hello big man, congratulations! I watched the game but didn’t see the post-match interview but Hendo told me that you want to get in contact on Whatsapp, so here we go.

“Pretty sure you were your whole life at least a Championship player and now finally you are there. Well done, great, great victory.”

Are u crazyyyyyyy the man, the myth, the legend sent me a Watsapp. Today can’t get any better. Thank you Klopp #YNWA #Beast20 #BeastMode we did it #champHereWeCome ????? pic.twitter.com/9RgiKZkYt2

Akinfenwa was clearly made up with the gesture—and as well as Klopp being happy to make it, it’s worth pointing out the generosity and good intentions of Jordan Henderson once more, who appears to have put the manager up to messaging what is essentially a massive Red who achieved something epic.

It’s yet another example of how this squad will go above and beyond to show there’s more to life than themselves and how everyone should be acknowledged for success.

Akinfenwa is clearly a bit of an icon for the players at Liverpool, too: Virgil van Dijk and Jordan Henderson both left messages of congratulations on social media, as did LFC Women striker Rinsola Babajide and former left-back Jose Enrique.

You are the king amigo ??? @daRealAkinfenwa . So many congratulations you deserve it so much. Hope you enjoy it with friends and family. ?? https://t.co/fCNpbAtNj6

On another Liverpool-related note, the play-off final defeat for Oxford means Ben Woodburn‘s loan is now at an end.

The forward had a good spell earlier on in the season and won praise from his manager, but a broken foot halted his progress and Woodburn broke a bone in his other foot during his rehabilitation.

He played the final minutes as sub at Wembley but couldn’t help his team find an equaliser and now returns to the Reds, with another loan next season seeming the most likely move.