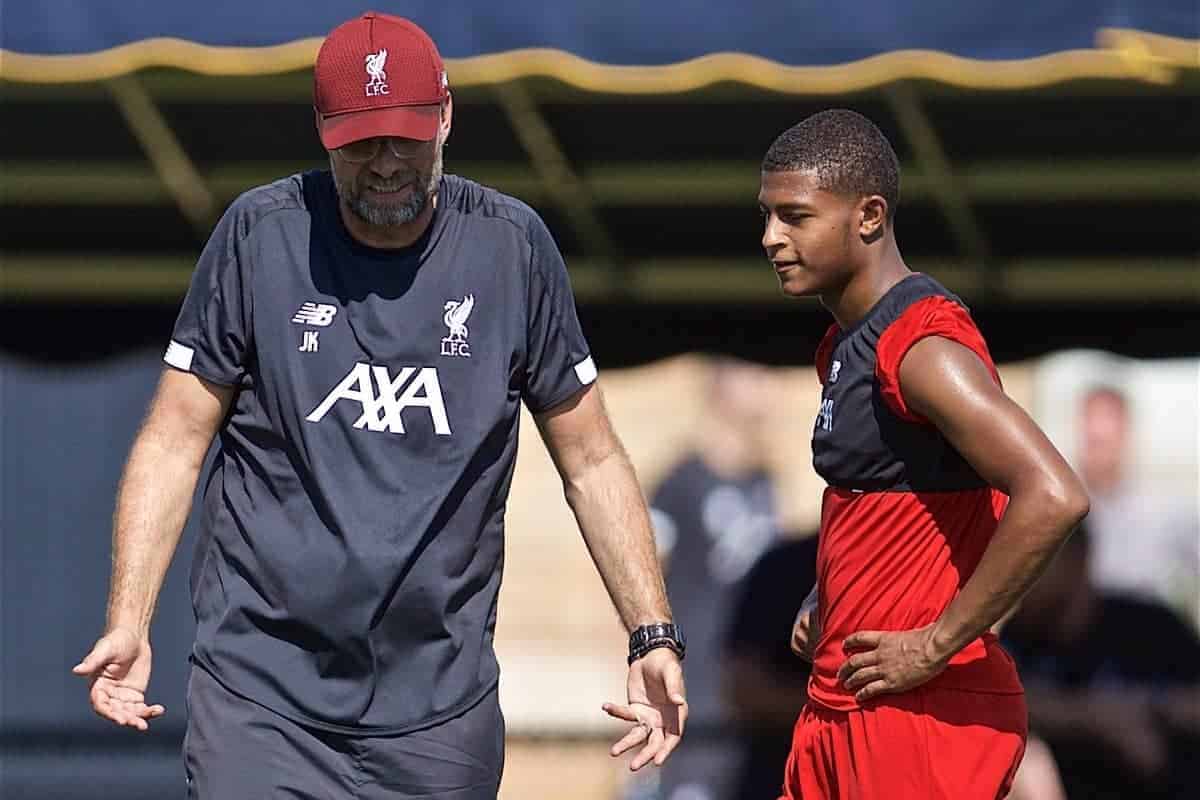 Jurgen Klopp has lauded Rhian Brewster for “showing his talent” during his impressive loan spell with Swansea as he hinted at how the club’s youth will help “save money.”

The boss has spoken at length about utilising the impressive young talent at the club’s disposal and “creating our transfers internally” during the financial uncertainty which the pandemic has caused.

With more questions than answers as to how the football industry will be hit and then respond, the Reds are looking to act sensibly.

It isn’t to say no transfers will arrive during the summer but splashing the cash is not on the agenda, and that is where the young guns can benefit.

And Brewster is one such name. The 20-year-old joined Steve Cooper’s Swansea on a half-season loan in January where he has since made 17 appearances with a return of seven goals, where three have come in the four appearances since the restart.

Having pulled out of a deal for Timo Werner, there is scope for Brewster, who made his Liverpool debut against MK Dons, to add depth to the forward options for 2020/21 but Klopp was coy on his plans for the 20-year-old.

“The plan with Rhian we will talk to Rhian and not here,” Klopp told reporters during his pre-match press conference.

“It was unbelievably important and I was really happy that we had the opportunity to [send him on loan], that he plays his ‘first proper senior year’.

“He had an awful injury so he needed a really long time and that’s why we said when he was coming back that it doesn’t make a lot of sense to be here, to be striker number two, three and sometimes in the squad and sometimes not.

“It was clear his situation was different to a lot of other situations for the boys at the club and he was really happy he could go to his former coach who he knew from the youth national teams.

“That helped a lot and they really wanted him. That is very important for a young striker because you cannot score every week and you should still stay on the pitch.

“It happened now at Swansea, played a good season and Rhian shows his talent absolutely, that’s clear. In the moment, nearly perfect but how it will be exactly next year we will talk about with him and his representatives.”

Brewster has looked to model his game on Roberto Firmino and has built confidence in a senior environment by playing week in and week out.

And with the boss once again hinting at plans to “save money” by using talent produced in-house, Brewster could fall into line alongside the likes of Curtis Jones, Neco Williams and Harvey Elliott as solutions for next season as it is only about “how good you are” not “how old you are.”

“Whatever you can create by yourself, we can produce together ourselves the better it is because it saves money,” Klopp explained.

“On the other side, these boys need time but we will use them as often as possible, that’s the plan. Whatever we can save out there in the crazy world of transfer markets is good.

“But, of course, the boys have to commit. I really think there’s always an easier way if you want, so you can either make sure you are now in the best place, means playing week in and week out, or you prepare your career and we are here for preparing careers.

“If the boys commit to that way it will be really good for them, I think we have proven that in the past, and I at Dortmund and now here at Liverpool, that it’s not about how old you are or who you are, it’s only about how good you are.”