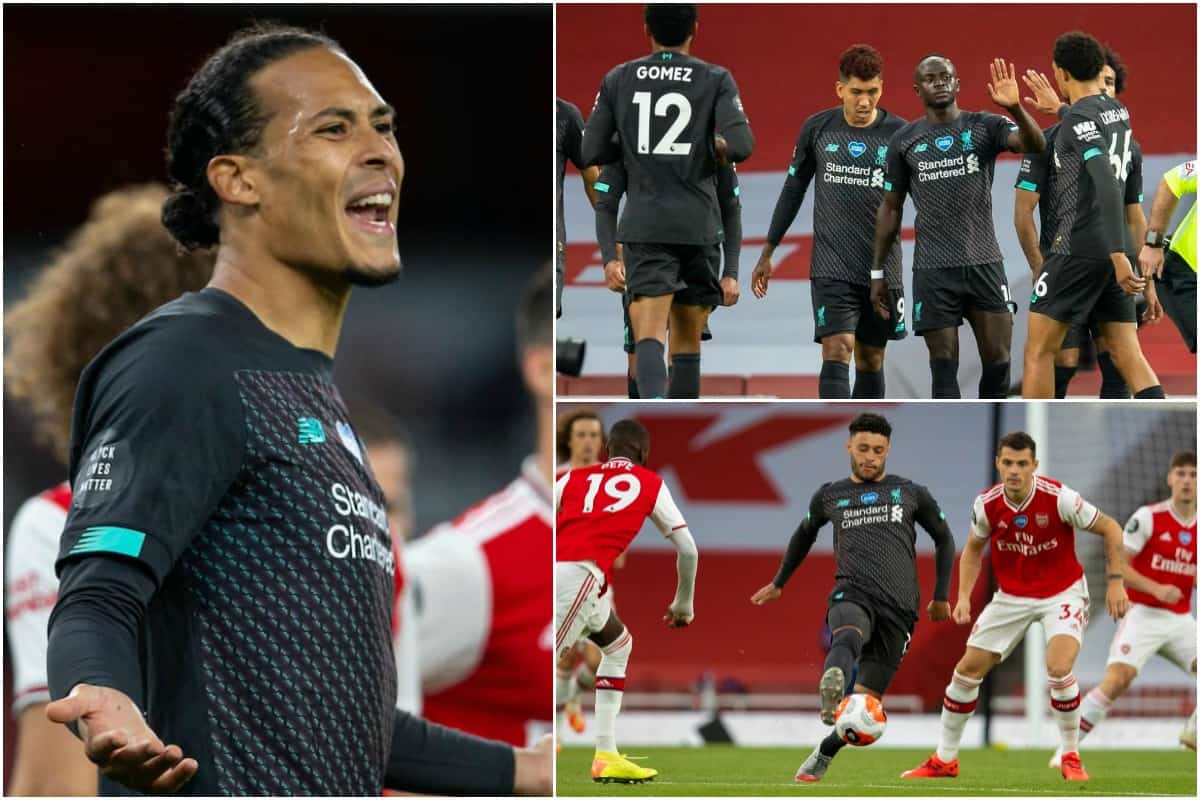 The Reds relinquished their chance to either equal or break the all-time points record in a Premier League season after the Gunners twice hit back following Sadio Mane‘s opener.

It was an affair not too dissimilar from those post-restart, with Jurgen Klopp‘s men dominating possession but having little to show for it on the scoreboard as a lack of ruthless finishing once again proved costly alongside their rare defensive mistakes.

The upside, of course, is that Liverpool are already league champions having set an unassailable target even before football was forced into a three-month break, where Chelsea now await ahead of the trophy presentation.

Here, This Is Anfield’s Joanna Durkan (@JoannaDurkan_) is joined by The Redmen TV’s Jack Gill (@jacklfcgill) and The LFC Couch’s Nish Veer (@CouchNish) to discuss the positives and negatives from Liverpool’s defeat and if the title-winning campaign is coming to an anticlimatic close. 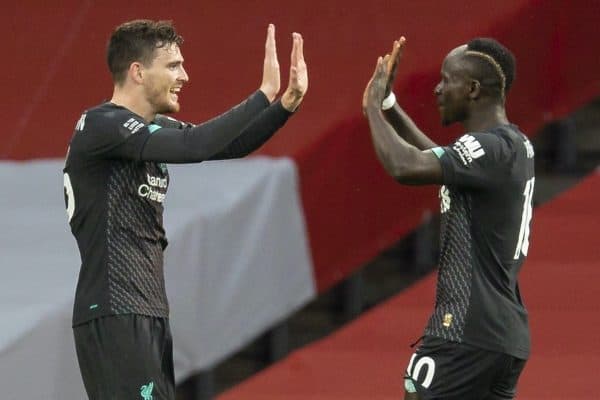 JACK: When Mane scored that beautifully worked goal to take the lead last night, I never thought we would end up losing the game.

We were dominant throughout but the full-time result in no way reflected that.

It was good to see Xherdan Shaqiri, but the collective look of shock on the faces of me and my dad when we saw him kitted up showed just how little we’ve seen of him this season.

Naby Keita and Minamino looked bright off the bench too and I think it’s only a matter of time before the former Salzburg man bags his first Liverpool goal and as for Keita, I think if he’s fit he should be a guaranteed starter on current form. 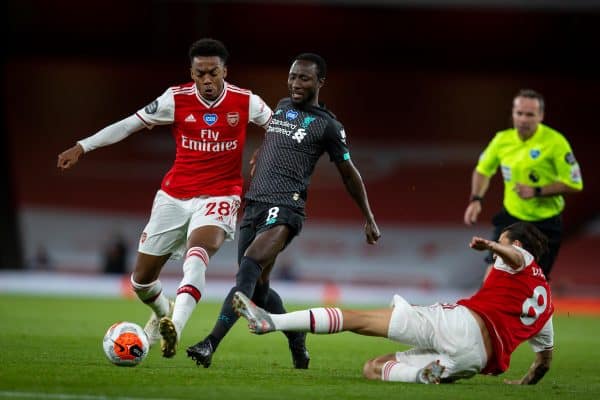 NISH: Just like Burnley, we played well in parts with some good ball movement and pressure on the Arsenal defence.

Robertson’s run and assist for Sadio’s goal was just sublime and it felt like the Reds would be able to push on from there and score two, three more, but it just never eventuated.

When Naby entered the field, our play seemed to step up a level. His vision, movement, directness and quick feet really added something to our attack.

I find it hard to believe he’s just turned 25, so I hope we get to a see a fully fit and firing Keita next season.

JOANNA: Aside from the inability to find the net and the two mistakes, Liverpool were by and large not as bad as the reactions on social media make you believe – it’s just the slight drop in output from the ridiculous standards we’ve set which made all the difference.

Mane was the standout once more and cemented my view that he is our player of the season having consistently looked to be the one to drag us out of our hole and I thought Minamino was very bright when he came on.

He threw himself into the contest and was eager to be on the ball, but it’s apparent his next step is to improve his core strength as he needs to be able to handle the physicality of the Premier League, especially if he is to occupy Firmino’s position.

JACK: I think things would be a lot different if it was Adrian and Lovren that made the errors leading to goals last night but instead, it was Alisson and Van Dijk, both collector’s items as these two rarely make mistakes.

If it were any other players I’d be worried, but I think it just shows that our lads have taken their foot off the gas since being crowned Premier League Champions.

The other thing I feel needs looking at is our goal scoring, both Pope and Martinez have been excellent in the games against Arsenal and Burnley but with the opportunities we have had in both, we should have come away with six points – but it’s just not going right for us in front of goal of late.

The Premier League points record is now out of sight too which frustrates me as I think this team was capable of clinching it. But performances of late haven’t been worthy of the record in all honesty.

NISH: Finishing, finishing and more finishing. A bit too much snatching at the ball rather than composure in front of goal.

Feels weird saying that about a squad that has produced incredible goals all season, but the last couple of games we have seen them become a touch blunt as Jack pointed out.

On most other days this season, we would have walked away with a comfortable win, but without that cutting edge, it certainly makes it tricky.

On top of that, our two most consistent performers over the last few years in Alisson and Van Dijk each made a mistake. Seems unthinkable that it would ever happen, but it did and that’s what lost it, but that’s football!

Would it happen again, maybe, but probably not for another 100+ games.

JOANNA: That we kindly gifted Arsenal the win, bows and all.

Despite coming under very little pressure, we appeared twitchy at the back and Alisson from the off showed a level of indecision which I cannot recount ever seeing from him before at the club.

As Nish noted, our finishing has been questionable, to say the least, both at Arsenal and since the restart, bar Crystal Palace, but my biggest bugbear from the night is why Ox started over Keita.

The latter is one to drive at the opposition, force them into a tackle or to vacate space and is the one who can create, especially when the threat of our full-backs are nullified.

And don’t get me started on why Origi was introduced – he creates little to no perceived pressure.

And with just three wins from our last seven games, is Liverpool’s season coming to an anti-climatic end?

JACK: I feel like this week is going to be some party and when we finish celebrating we can then look at what’s to come next season.

What disappoints me is when we won the league, though I wanted the points record it wasn’t something I was desperate for, I wanted was to see us play like champions.

At the moment, I feel like we are playing like we’re still hungover. I get it, what we are seeing is the result of these players giving everything for two seasons, winning the Champions League, the Club World Cup, the Super Cup and now the league so it’s easy to get complacent when you win it so early.

But, in truth, no, I don’t feel like it’s an anticlimax! I’ve waited my whole life for this league and we’ve done it and the feeling is amazing. I still personally have faith and belief that we can do it again next season and have double the party!

NISH: Not in the slightest. I’ve waited far too long for this to be let down by “nice to haves” like the 100-point record etc.

At the start of the season if you asked me whether I’d be happy to win the league and absolutely smash it by ~20 points, but not get the points record… I’d absolutely say YES, so that doesn’t waver for me.

This is one of the best Liverpool FC teams in history, so I simply refuse to feel upset by records like this, I’d rather embrace it and soak it all in so I can tell my grandkids about them one day.

JOANNA: For me, it’d be hard to say it hasn’t been an anticlimatic end with just two wins so far since we were officially crowned champions – and let’s not discuss our away form – as it would have been nice to finish on a high, which we, of course, still can.

But it in no way diminishes our success or the significance of it, but it’s well in one’s right to feel frustrated at how we’ve approached games and the obvious drop in concentration and performance levels.

The points record is only one aspect of it, it’s disappointing that it’s no longer in reach but not necessarily unexpected due to the circumstances and how early we did win it.

At this stage, our output is more of a concern than anything to be overly worried about as it least gives us a target to surpass next season.

We are champions and when we look back on this season none of this will matter and now all I’m thinking about is the Henderson shuffle!