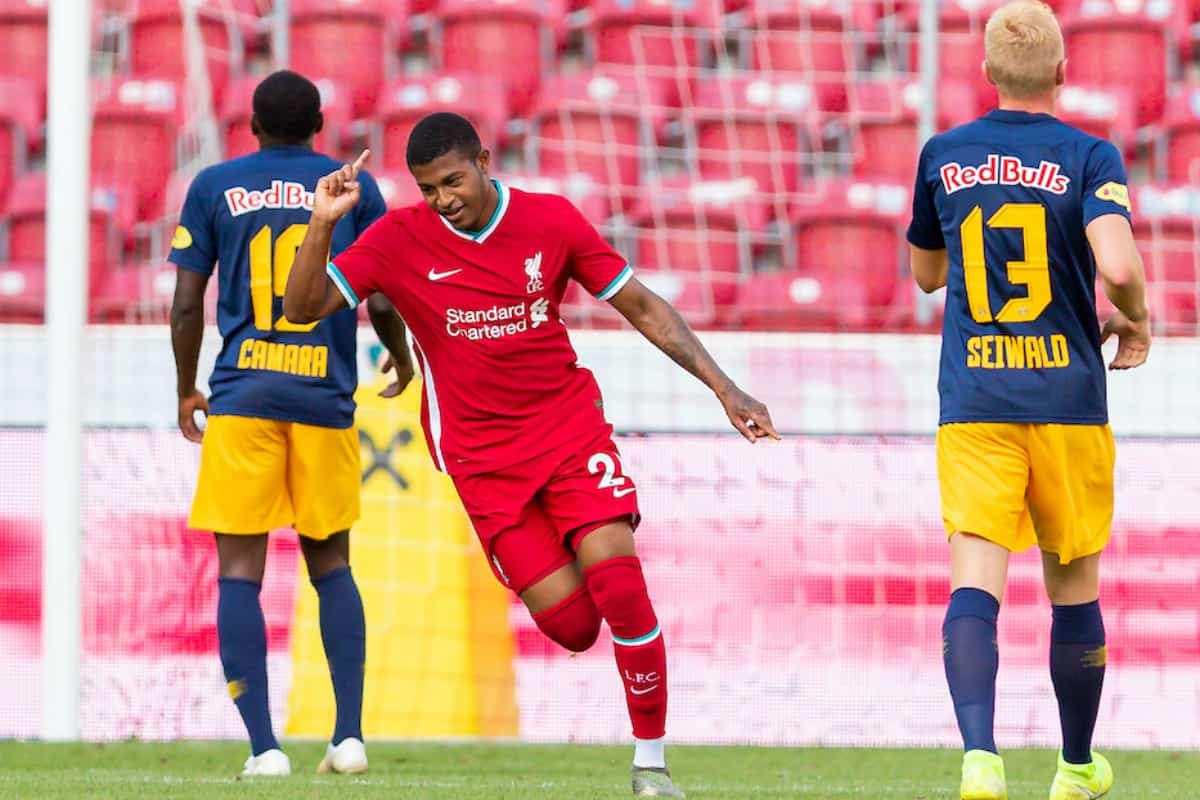 A game of two halves saw Liverpool wipe out a two-goal deficit to secure a 2-2 draw against Salzburg, with Rhian Brewster the man of the moment.

Jurgen Klopp‘s side were expecting an intense afternoon at the home of the Austrian champions and it is exactly what they received.

With less than 15 minutes on the clock, the Reds were two goals behind as Patson Daka reaped the rewards from capitalising on Liverpool’s sloppy play.

With a heavy training loan behind them, Liverpool lacked a real spark across the field of play – until mass changes in the second saw Rhian Brewster come to the fore.

The young striker rifled home two goals in a 10-minute spell to wipe out the deficit and see the Reds maintain their 100 percent record in pre-season.

Salzburg provided the ideal test for Klopp’s men with the new season fast approaching and there will be a lot of lessons to take as Liverpool now cast their eye to the Community Shield.

Here’s how supporters reacted to the Reds’ latest pre-season outing on Twitter, Facebook and This Is Anfield’s forum.

Brewster earned the acclaim of Reds after turning the tide, leading to thoughts on his future…

Brewster with a better strike-rate in pre-season than Haaland managed for Dortmund last season. It's a valid comparison because Haaland used to play for Salzburg and now Brewster is scoring against them, so it's a level analysis. Transfermarkt value should be £95million.

Really want Brewster to stay this season, but expect him to be loaned out again, which I understand.

Brewester! Some finisher this kid!

Rhian Brewster is deadly. A pure and proper finisher. Fowler-esque.

“Good lad. That’s exactly the kind of pressure our front three need in order to get to their best again.”

Goals like that happen so often for Brewster that it’s not luck. He’s just alive to openings

But Brewster – wow! Two good teams he's just faced for about 70 minutes (one from Bundesliga, one from Champions League) and he's scored 3 superbly taken goals. Bobby may be spending some time as an attacking midfielder this season! Even as a sub, Brewster could change games.

Don't think I've seen a striker finish as instinctively as Brewster since Fowler.

Logic in letting Brewster go on loan again but also sense in using him as first change if Liverpool need a goal/want to change point of attack next season. If he does go on loan I’d make sure there’s option in the deal that says he can come back in January – could prove vital.

Others did not quite hit all the right notes, but it is still pre-season…

Wow. Just pre-season, I know, but that was horrendous from boys that will most likely be playing on Saturday

We are being sloppy in defense but I guess that’s to be expected in pre season. Also if this convinces the Liverpool board to spend money on Thiago I won’t be mad.

Something something pre-season something.

Fabinho mate, wake the fuck up

Salah is dropping very deep, probably because TAA isn’t there and he’s the playmaker

Liverpool couldn’t deal with Salzburg’s press in the first half but gradually got better. Very intense match after what would have been a very intense training camp. Brewster a big positive.

That was a good run out for #LFC. Salzburg are no mugs and are close to us in how they play. They will cause teams lots of problems in CL this season. Team looked off the pace in the first half but shock therapy will be a good lesson to up the intensity before season kicks off.

“Salzburg are playing fast and intense while we are sleepwalking. Perfect opponent with the new season a few days away.”

Anywho. Another one's done. Good stuff from Taki and Rhian in particular. First half wasn't great but a good chance to do some hard running against a side with high fitness levels in any case.

We should play these every preseason. Proper test

We'll beat Arsenal. I'm confident. This tough match is just what the players needed to get them focussed and sharp for Saturday.

But overall, it proved to be another invaluable game which presented more opportunities…

I think Koumetio is going to be a star. I think a year in the academy and a year on loan he could be ready.

“Good game and good exercise for the lads.”

love when there's a bunch of preseason tape the manager can point to and say "that. don't do that." it's what's preseason's for.

Well second half was much better
– youngsters better than the first team
– Koumetio looks some talent
– Brewster has to stay, the best finisher we have
– a few of the youngsters need loans
– Nat Phillips is good and surprised decent championship teams aren’t after him

I've said this for a long time but I want to keep Grujic.

Curtis Jones is technically gifted but he works hard & presses so well. His persistence lead to that chance for the equaliser, impressed again. #LFC