Liverpool’s new under-23s assistant coach Gary O’Neil is hoping to use his experience in the Premier League and Championship to be a “bridge” from academy to first team.

O’Neil has joined the club as assistant to new U23s manager Barry Lewtas, after a playing career that saw him represent the likes of Portsmouth, Middlesbrough and West Ham.

The 37-year-old took on Liverpool on 13 occasions while turning out for those three clubs along with Norwich, having played 215 times in the Premier League and 273 times in the Championship.

He therefore brings a wealth of experience with him to Kirkby, and speaking to BBC Merseyside Sport, he explained how he believes this will help him serve as a “bridge” to the club’s youngsters.

“Barry’s worked with a lot of these lads all the way through, from under-14s, under-15s and all the way up,” he said.

“He knows the group very well, so what I can bring to that is a fresh set of eyes.

“I saw a bit of the lads last year, but mainly I’m looking at a lot of them as sort of new players, who I don’t know very well. So I can bring that to it.

“And also the age group that we’re working with, the U23s in particular, we need to get these boys ready to go and play first-team football, which from what I’ve experienced in my time is very different to playing U23s football.

“So [there is a] bridge that I can offer them, to try and give them little bits of information, to maybe try and improve maybe just the one, two percent here and there that can make a difference and can get them ready for when hopefully they step into Liverpool’s first team.

“Or when they go on loan to gain experience, the challenges that they may face and how I can help them deal with them really.” 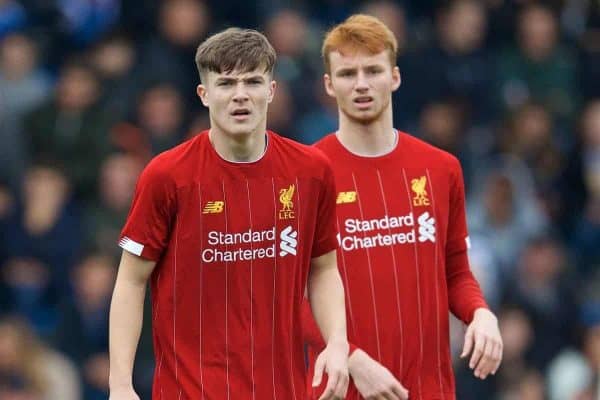 Liverpool have already allowed U23s centre-back Morgan Boyes to join Fleetwood Town on a season-long loan, with the 19-year-old set to play under a former team-mate of O’Neil’s in Joey Barton.

O’Neil and Barton played alongside each other at QPR, and speaking on Boyes’ switch to Highbury, the Fleetwood boss said: “Hopefully we can help him develop at Fleetwood and see him establish himself in our side.”

That is one way to gain experience of senior football, but soon Liverpool will be making the pathway from academy to first team slightly easier with the redevelopment of the training ground at Kirkby.

But O’Neil believes that the club have already proven under Jurgen Klopp that they are more than willing to promote youngsters if they are ready.

“I think we’ve seen over recent years the lads will be well aware that that pathway is there,” he continued.

“The guys over at the first team have a fantastic link with the U3s and the whole academy.

“As you’ve seen with Trent and Curtis Jones and people going over recently, there is the opportunity that if you’re good enough and you’re ready, you can progress.”

That progress will only be aided by the arrival of O’Neil, along with the steady promotion of coaches like Lewtas and Marc Bridge-Wilkinson, the appointment of Vitor Matos and the attentive work of Alex Inglethorpe and Julian Ward.

It is another example of the ‘marginal gains’ approach in effect, and hopefully Liverpool can benefit further in the years to come.