Joe Gomez has opened up on the “tough” decision he faced in the summer of 2017 after two serious injuries which left him sidelined at the start of his Liverpool career.

The 23-year-old is currently one of the mainstays in Liverpool’s title-winning sides, having established a formidable partnership with Virgil van Dijk.

But the start of his career at Anfield hit more than a few bumps in the road, as while a debut would arrive at the earliest possible point, against Stoke at left-back in 2015, an anterior cruciate ligament injury just after Jurgen Klopp‘s arrival would derail his burgeoning career.

The serious knee injury ensured the young defender would miss the entire 2015/16 season, only for his recovery to be hampered by an Achilles tendon issue.

Gomez would not feature in a first-team game until January 2017, 15 months after his initial injury and he would feature for just three games in 2016/17 – none of which came in the Premier League.

Now 20 years old at this point, Gomez was fit to feature in his first pre-season under Klopp but it came at the same time as England’s under-21s European Championship campaign – meaning a decision needed to be made.

And speaking on the Views From Inside podcast, Liverpool’s No. 12 opened up on “the toughest period” of his career and how he had to make the decision to create a foundation at the club after a long stint on the sidelines.

“The gaffer was really positive with me and that took a massive weight off my shoulders in terms of those worries of ‘does he know me, what’s he going to be like with me,” he said of the moment he received confirmation that he tore his ACL. 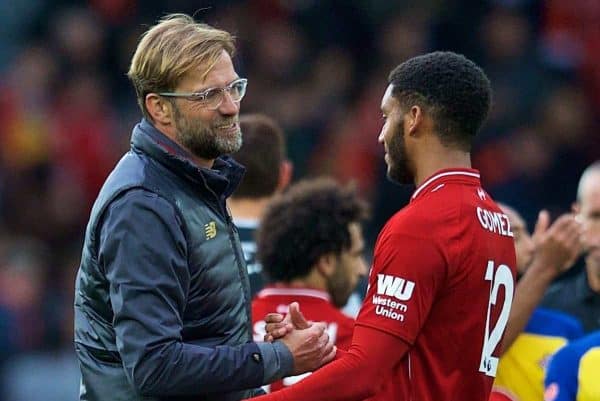 “I got the news and 20 minutes later I’m still emotional and he walks into the room and just reassured me [saying], ‘don’t worry, we’re going to wait for you, you’re going to be fine’.

“That was massive for me, it was huge mentally. I was 18 but I still didn’t feel like I was a man yet, I found that out the next few months after the surgery, you just waste away and I’d never experienced pain like it.

“The toughest period of my career but it definitely shaped me and I learned so much about myself in that period.

“Then I had an Achilles injury, my knee was cool but I just couldn’t get over the Achilles. Then it was another six months of calf raises and there’s no quick fix.

“Once I got back it was a relief. The gaffer knew what I was ready for before I was, he just knew that first six months I was not going to be myself, coordination and awareness did not come back for a while.

“I came back towards winter and the rest of that season I was just getting on the bench and coming on a couple of times but I wasn’t really involved,” he continued.

“I had to see it as a fresh beginning in the offseason (in 2017) and I had a decision whether to go to the European Championships with the U21s or just focusing on coming back for the start of pre-season.

“It overlapped by a bit and so that was a big step for me. I had a year out and it was my last chance to go to the Euros and that was a tough decision.

“I didn’t want people to have the perception that I didn’t care about playing for my country.

“It was a big decision but the England U21s manager at the time, Aidy Boothroyd, was just so good to me and I got a chance that pre-season and that’s when I first started first getting into the team.”

A decision which paid off but Gomez would not be finished overcoming injury hurdles, but in 2017/18 he would feature a total of 31 times, a career-high at Liverpool until his 43 appearances in 2019/20.

For every setback, the youngster has proven his resilience time and time again and is now considered a mainstay in the heart of Liverpool’s defence and a world, European and English champion.