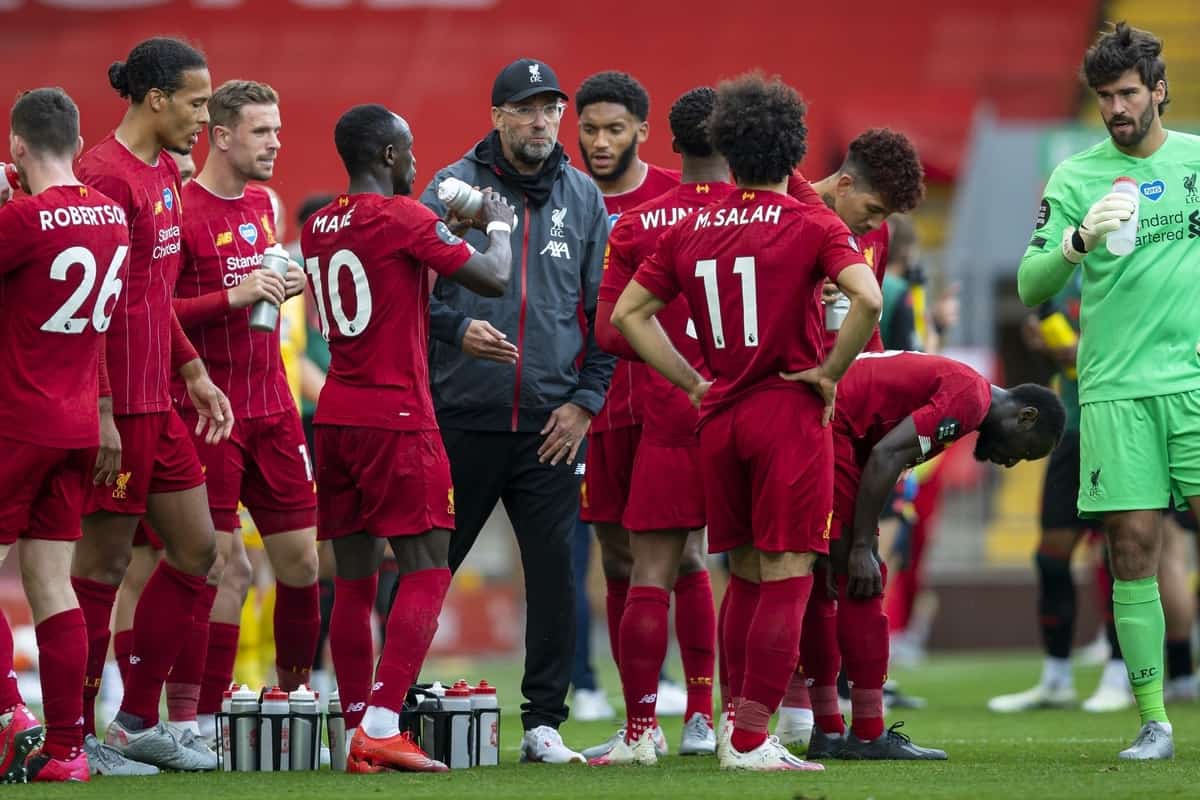 The English football calendar won’t include a winter break as the Premier League plays catchup in 2020/21, meaning Liverpool could play 17 times in two months with no rest.

The Premier League confirmed their matchday calendar for the new campaign on Thursday afternoon, with the season kicking off on the weekend of September 12/13.

Earlier in the day, the EFL released their plans for the League Cup, which will see clubs competing in Europe still enter at the third round, while the FA announced that they have scrapped replays for the FA Cup.

On Wednesday evening, Liverpool’s participation in the Community Shield was formally confirmed, with the Reds taking on FA Cup winners Arsenal in the curtain-raiser on August 29.

With the season beginning a month later than usual, it is frustrating that international breaks remain in September, October and November, along with March next year, while for Liverpool, the Champions League will also be a focus.

Jurgen Klopp‘s side will battle on four fronts this season, along with the Community Shield, and will be looking to secure a second consecutive Premier League title and to ensure the European Cup returns to Anfield after relinquishing it in 2019/20.

Within the Premier League‘s calendar for 2020/21, it was confirmed that there would be no winter break, after the first of its kind in England back in February.

It has been deemed impossible to fit a mid-season break into a truncated season, which will ensure the most successful sides have very little rest.

The Premier League has published its schedule in full, so THIS is your finalised packed schedule for the 2020-21 season. pic.twitter.com/imMzYDDSH6

In fact, as outlined by ESPN’s Dale Johnson, in the event of Liverpool reaching the finals of the Champions League, FA Cup and League Cup—unlikely as it seems—they could play a total of 65 games over 274 days this season.

That would be an average of one every 4.2 days for the entirety of the season, though it is highly improbable that the Reds would do so.

If a rotated side is successful in the FA Cup and League Cup, however, there is the likelihood that Liverpool could play 17 games over the space of two months in December and January.

Six Premier League fixtures are scheduled in each month, along with two Champions League clashes, the quarter-final and semi-finals of the League Cup and the third and fourth rounds of the FA Cup.

That would bring the Reds’ rate of games for December and January down to one every 3.6 days, and without a winter break in February, that could be a big concern for Klopp.

In all probability, the manager will sacrifice one or both of the domestic cups, as he did in 2019/20, with Neil Critchley taking charge of a game in the FA Cup and League Cup respectively while the first team were rested entirely.

It is a decision that may be for the best, given the exceptional circumstances surrounding the new season, and it is a situation that fans can steel themselves for.