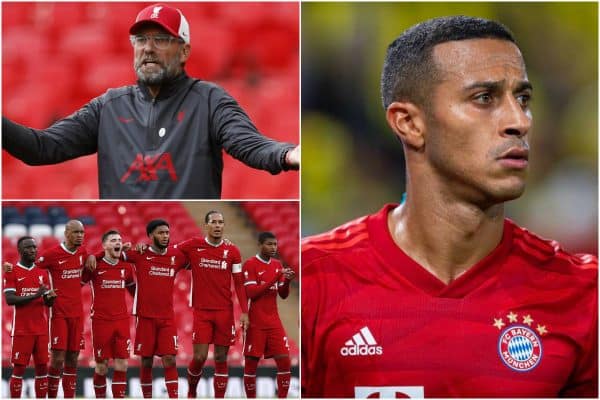 The pattern of the game as Liverpool fought back only to lose on penalties to Arsenal in the Community Shield highlighted why Thiago Alcantara is a must-sign player.

It is considered by most as a friendly, but nonetheless it was one that was set up for Liverpool to win.

Arsenal arrived at Wembley with minimal training in their boots, starting their new campaign just four weeks after the last one finished, while the Reds had taken in 10 days in Austria and two intensive friendlies.

For the second time in as many seasons, though, Liverpool were undone in the Community Shield, losing 5-4 on penalties after a 1-1 draw.

As a curtain-raiser, and the first game back from a shortened pre-season, this tie can serve as a preview for the season ahead, and that is likely to be the case in the way Arsenal set themselves up.

Mikel Arteta is widely praised as one of a new breed of managers, one of Pep Guardiola’s acolytes restoring the Gunners to their former attacking glory, but there is a clear pragmatism and caution in his approach.

For the majority of the game, Arsenal camped 10 men behind the ball, utilising their strengths to soak up the pressure and break to damage their opponents.

That is how they opened the scoring in the 12th minute, as Pierre-Emerick Aubameyang took advantage of an exposed Neco Williams to bend an effort beyond Alisson and allow the Gunners to sit even deeper and hold on to a lead.

Jurgen Klopp‘s team selection played into their hands in this respect, with a midfield trio of Fabinho, Gini Wijnaldum and the surprise inclusion James Milner prompting a staid first hour with Andy Robertson the only real outlet on the left.

Too often, Virgil van Dijk and Joe Gomez picked up the ball and had no options for the pass; too often Milner struggled to slalom through the Arsenal back line as bodies were packed in his path.

With the threat of Aubameyang pinning Williams back, the Reds’ only real hope was the delivery of their left-back, but despite laying a number of chances on a plate, Robertson could not begin his campaign with an assist.

The tide turned with the introduction of Naby Keita and Takumi Minamino, but the dynamism they offered should really have been in place from the first whistle.

Arsenal laid out the blueprint for most, if not all, of the 19 clubs Liverpool will take on in their bid to win back-to-back Premier League titles in 2020/21, and Klopp and his backroom staff are already well aware of this.

“Trent and Robbo literally give us wings. But the rotten thing is: teams are already trying to stop that,” Pepijn Lijnders explained towards the end of July.

“It is up to us to remain unpredictable.”

The consistency and quality of Robertson and Trent Alexander-Arnold has seen Klopp build his game plan around service from the full-backs, but with coaches now realising how to nullify this threat, Liverpool need a new outlet.

That is why Keita rose to prominence in the final months of last season, and likely why the Reds shifted to a 4-2-3-1, with Minamino, Roberto Firmino and Sadio Mane in support of Mohamed Salah, for the brief and bright spell that forced the equaliser at Wembley.

Alexander-Arnold’s absence served as a clear reminder of how Liverpool now need to find new avenues towards goal, and if the opposition is setting up to block the flanks, that must be through the middle.

Enter Thiago, the most-coveted player on Merseyside—and a midfielder who, by most accounts, is top of Klopp’s wish-list.

“We had to against a low block, with an incredible counter-attacking threat, and for these games you need the final punch,” Klopp told BT Sport after the game.

“I think in the end we created enough moments, but for feeling better in the game we should have created more, because we had the ball quite a lot and had to play around.

“But we had to be careful like crazy because of Aubameyang, all this stuff, because they are really strong in counter-attacking.”

It is difficult to improve on the most-used XI of Liverpool’s title-winning season, but if more variety and direction is needed from any area, it is in midfield.

With Wijnaldum decidedly quiet in the Community Shield, it is timely that all talk of Thiago coming into the side comes at the Dutchman’s expense, with a possible move to join Ronald Koeman’s bold new era at Barcelona looming.

Thiago would undoubtedly change the dynamic for Liverpool, and while he may not operate with the thrust of Keita, or his team-mate at Bayern last season, Philippe Coutinho, his world-class brand of midfield play could prove the conduit for a new tactical outlook.

His decisive contribution in what is set to prove his last game for Bayern, the Champions League final victory over Paris Saint-Germain, is the perfect example of what the Spaniard could offer to Liverpool.

Bayern dominated possession in Lisbon, with 61.6 percent of the ball, and for the majority of the game, PSG were held back in their defensive third.

It was a similar, frustrating tactic to that which Arteta employed at Wembley, but Thiago‘s pass from deep broke the lines when PSG were stretched, and the resulting move saw Joshua Kimmich cross for Kingsley Coman to head home the winner.

Though his contribution was lauded, this was a typical move from Thiago, and it is just one of many unique qualities that he can offer to Klopp’s midfield.

Thiago is one of the most press-resistant midfielders in world football, which will be part of the reason why Klopp is such a big admirer, but he is also so clinical with the ball, particularly in tight spaces, and boasts the cutting edge to make possession count.

Liverpool will continue to rely upon Alexander-Arnold and Robertson, but their need to switch things up and add more strings to their bow was evident once again in the Community Shield.

The move that saw Thiago instigate the break for Bayern’s own right-back to tee up a Champions League-winning goal is a clear sign of how his arrival could shift the landscape for Klopp.

There is no doubt more sides will set themselves up to stifle Liverpool as they defend their title, and it is up to Klopp and his staff to find solutions it.

Given he is available for such a relatively low fee, Thiago appears the ready-made answer to these problems.

While it may take some shuffling around in the transfer market, and perhaps even an exit for Wijnaldum first, signing Bayern’s No. 6 may be the difference between a season of struggles and a campaign of dominance.