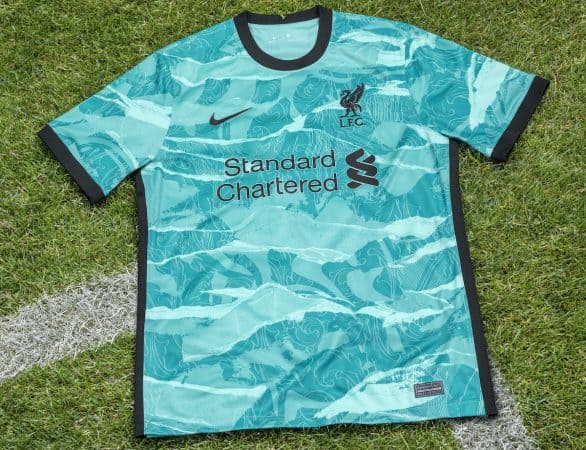 “Praying for no away games”, “Actually quite cool” – Liverpool’s new Nike away kit gets mixed reviews

The Premier League champions launched their new away strip for 2020/21 on Tuesday, a teal and black edition which received mixed reviews from fans.

The kit is the second to launch as part of Liverpool’s new association with Nike, following on from the home kit at the start of August, with the teal trim there featuring prominently on the away edition.

The design draws on “cultural references from across the city,” while the swirl pattern takes inspiration from the Shankly Gates.

It’s a bold choice for Liverpool’s ventures on the road next season and it has split opinion among the fanbase.

Here’s what supporters had to say about the club’s new kit on Twitter, Facebook and This Is Anfield’s forums.

It didn’t hit the right notes for some, with the design choice not one which impressed…

If they had made it plain white with the black trimmings it would have been a ??? Sometimes simplicity is everything. pic.twitter.com/OmEiWUJv4G

“Praying for no away games next year.”

It's disappointing,sack the designer,compared to some of the concept kits that were goin around its rough

– Sweeting on the forums.

Awful. Looks like a babies outfit from Tesco or a swimming costume from one of the gift shops abroad

“Poor…from such a big brand like Nike I expected something a bit more customised.”

It's fair to say it won't be a classic seller this one. Not great unfortunately

On the road …or the beach?

But for others, it was a hit with the concept behind the design in mind…

Thank you for coming to my TED Talk.

I actually quite like the away kit. *Puts tin hat on*

“When you read the reason behind the design it’s actually quite cool.

Mishmash of Shanks gates and a ripped paper look. I don’t mind it.”

I like it. Think it would make a better training kit though

This year kits are way better than last season kits, just people will never admit it!!

“Just like the home kit doesn’t look good on first appearance but once you see it on it’s very nice.”

I like all the new LFC Nike kits. Template crew gonna be quiet tonight! ??

COME ON YOU HYPER TURQUOISES!!!

I may be the only one, but I like the color, it’s fresh

You already know what I think about this shirt. ???? pic.twitter.com/FXlEnt9k7k