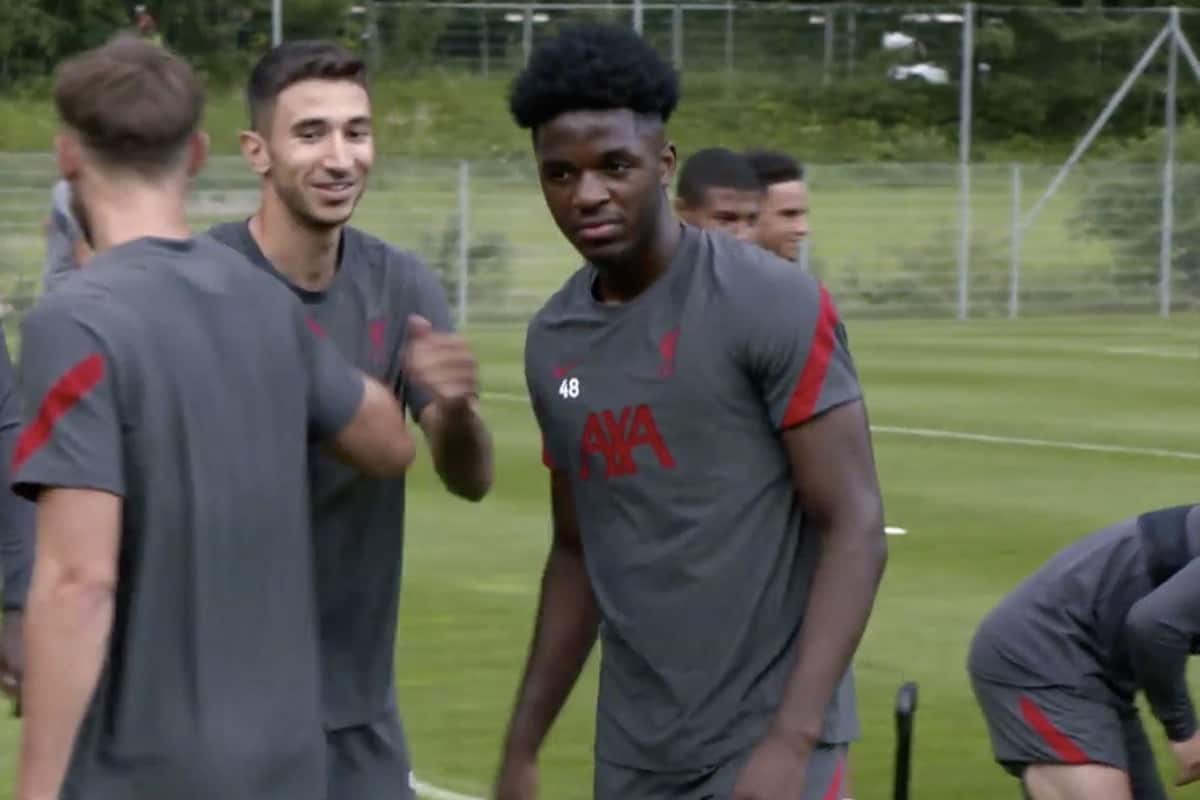 Liverpool welcomed back some familiar faces when they reported to pre-season training in Austria, but also a new face from the academy in Billy Koumetio.

The Reds arrived in Saalfelden on Saturday morning for their first day back, as they prepare for a 2020/21 season which starts with the Community Shield on August 29.

Neither were Leighton Clarkson and Jake Cain, despite spending the final months of the season training with the senior squad, with the midfielders instead expected to start the campaign with the under-23s.

One interesting inclusion, however, came in the form of Koumetio, who capped an exciting week on a personal note by joining Liverpool in Austria.

Koumetio was grouped with Phillips, Brewster, Fabinho, Gini Wijnaldum, Neco Williams, Divock Origi and Xherdan Shaqiri for exercises in front of a stunning Alps backdrop, with Andreas Kornmayer putting the squad through their paces.

The session included fitness work as well as drills on the ball, including passing and dribbling, to help get the Reds back up to speed after a short break.

It will be interesting to see if Koumetio is included upon Liverpool’s return to Melwood in the days leading up to the Community Shield, with the Frenchman certainly standing out physically.

Despite being just 17, the French centre-back is built like a player 10 years his senior, matching up to Grujic in terms of height at 6’3″ while being considerably bulkier than the likes of Phillips and Joel Matip.

Koumetio signed from US Orleans at the start of 2019, and though injuries hampered his progress in his first season with the club, he impressed in his 12 appearances at academy level.

He was also named on the substitutes’ bench for the League Cup victory over Arsenal in October, and earlier this week put pen to paper on his first professional contract with the club.

That should tie him down until 2023, with three years the maximum length for a scholar signing his first senior terms, but further progress in 2020/21 would likely see him handed an extension beyond that.

A dominant centre-back with the ability to lead from the back, Koumetio is strong in the air and on the ground, and is able to pass with real composure too.

Klopp will be keeping an eye on him while in Saalfelden, as one of a number of in-house options to replace the departed Dejan Lovren.

Phillips is another candidate, along with Sepp van den Berg and Ki-Jana Hoever, though the latter is attracting loan interest from the Championship, which could benefit him significantly.

It would be a gamble to throw Koumetio in at the deep end at 17, and therefore a more experience fourth-choice centre-back is likely to be brought in, but he could catch the eye in these sessions in Austria.

Pre-season is an opportunity for young players to make an impression ahead of the season proper, and with Liverpool facing a ridiculously busy schedule this time out, perhaps Koumetio could present himself as a solution.