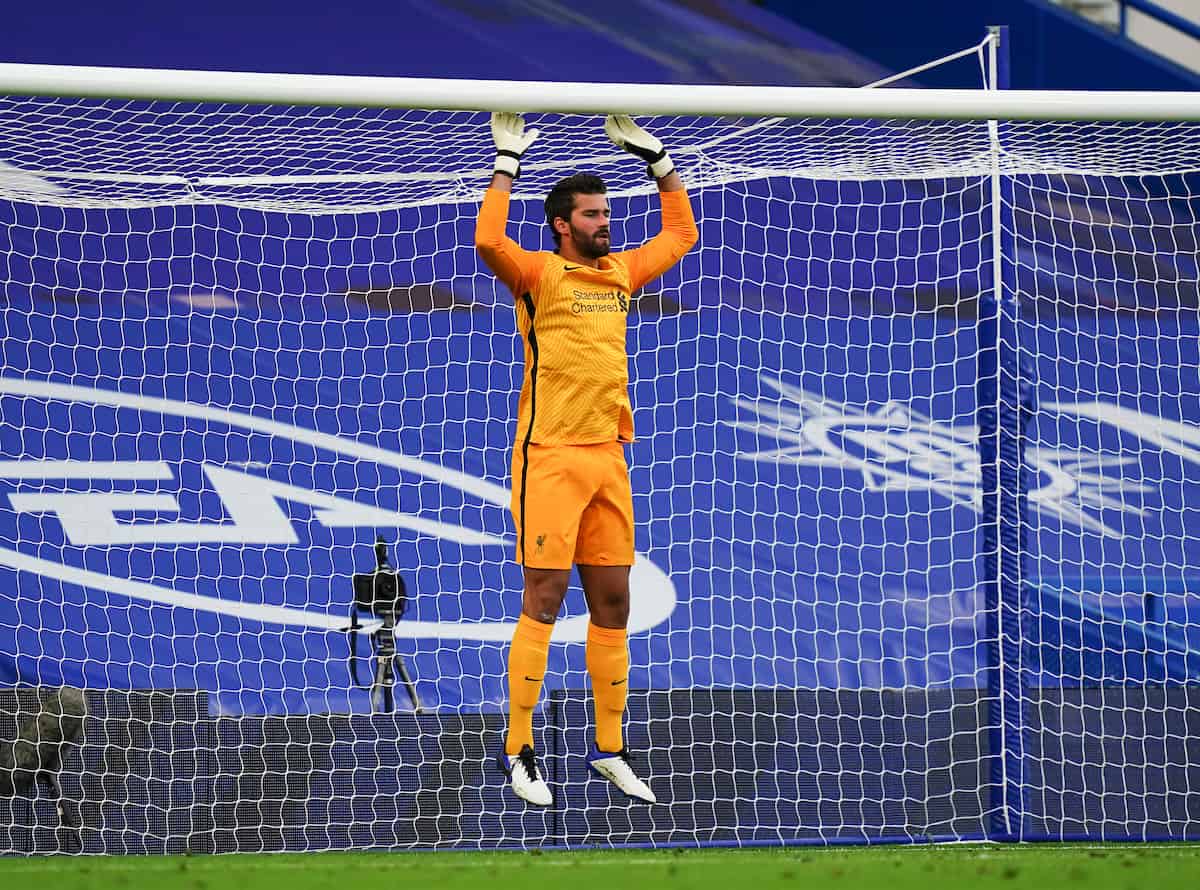 Alisson Becker was pleased to have contributed to the Reds’ win at Chelsea at the weekend, with his penalty save from Jorginho marking a first for both players.

The Brazilian is the best goalkeeper in the world for many and certainly in the top three for most.

His abilities are all-encompassing, though there had been question marks recently whether he had maintained his usual high standards—and one trait missing in his armoury was a proven record at saving penalties.

At Stamford Bridge on Sunday he saved his first spot-kick for the Reds, in so doing also forcing Jorginho into a first league miss from 12 yards in a Chelsea shirt.

Ali did point out after the match that Man City‘s Riyad Mahrez had also failed to score against him, but this was a more direct intervention on his part – which he told LFCTV he was delighted about after not having saved any at Wembley recently.

“I’m really happy because in the Community Shield we lost on penalties and when the goalie doesn’t save any it makes you feel down and think you should do more, could do [something] different.

“But the secret is to keep going, to know you are [going] in the right direction. We did it together, me, [goalkeeper coach] John [Achterberg], [assistant] Jack [Robinson], the video team.

“Also the rebound, Millie [James Milner] and Virg[il van Dijk] did really well and showed confidence that I would save the penalty.”

While the Reds were dominant throughout the game and 2-0 was an absolutely just scoreline, conceding at that time might have made the last 10 minutes or so rather more nervy and would have undoubtedly encouraged 10-man Chelsea to push on.

Alisson credited an increase in the tempo the Reds played at after the break for the goals, with the hosts unable to keep pace or energy with Liverpool.

“It’s a massive win away to Chelsea. We did a really good job.

“Our mentality was to improve the intensity of the game; we had to be calm to play but not slowly, have a good intensity and pressing them on the right moments.”

The Reds have thus started with six points from two games, already overcoming one of the sides who were supposed to mount a much sterner title challenge, and on their own park to boot.

More of the same can be hoped for next time out in the Premier League against Arsenal, who are enjoying their own revival and who are the side who defeated the Reds on spot-kicks at Wembley.

Hopefully they won’t get the chance to test Ali from 12 yards again anyway, but if they do, our No. 1 will surely be feeling in more optimistic mood at his chances of being the hero again.