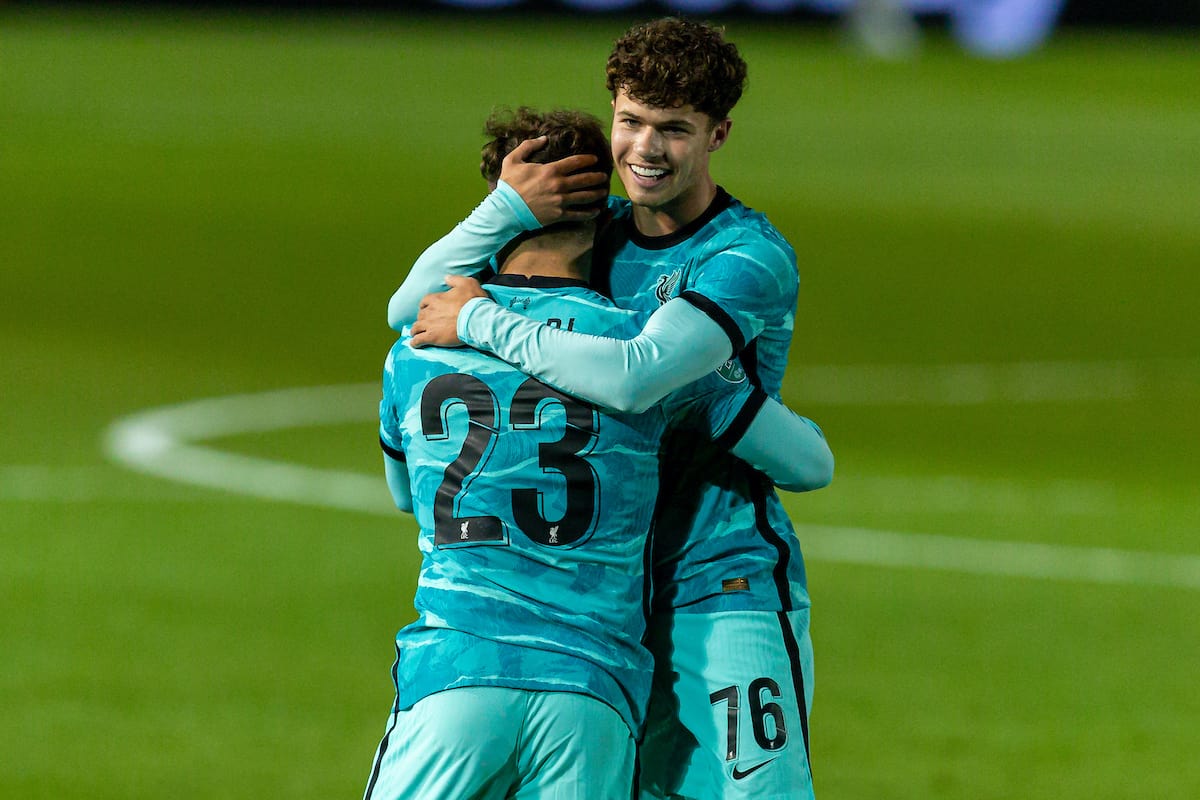 Rhys Williams had a nice and tidy first half, being guided through the match by the non-stop instructions of Virgil van Dijk.

His highlight moment came with a pinged diagonal ball toward Divock Origi in the buildup to a Curtis Jones goal, but there were a couple of neat recovery runs and aerials won, too.

In the second half came the learning curve: two passes in behind him and two attempted tackles which he missed in the leadup to Lincoln’s consolation goal.

Kostas Tsimikas made his first Reds start and put in a reliable, solid and unspectacular display, showing the traits we can expect to see plenty more of over the season.

His runs forward were frequent and clever, crosses were fiercely struck and he got into the box as well as on the overlap, while defensively he was aggressive and diligent about tracking back. More to come from the Greek.

Marko Grujic made a return, rather than a debut, and was comfortably dominant in a holding midfield role – while also scoring his first competitive goal for the Reds.

Finally, Diogo Jota played half an hour or so off the bench, showing a few nice touches and striking one effort just wide.

Xherdan the 8, Shaqiri the great

The Swiss winger was, in fact, a Swiss playmaker; playing a left-of-centre role for the most part, he was involved in the Reds bringing the ball out of defence and midfield, link-play down the channel and the typical recycling of possession after stopping the opposition getting out of their defensive shape.

He reminded us of what we’ve missed very early on, with an absolute missile of a free-kick which flew in off the crossbar.

Add in a few ridiculously good corners and some clever passes into the area and it was a most welcome, and long overdue, return for the No. 23.

Hopefully this is the first step back toward more regular involvement, whichever role it’s in.

Knocking on the door

You’d nearly feel sorry for him. Three world-class forwards at the club, plus a bit of a cult icon with some fans in Divock Origi, just finding his feet after a mid-season move…and the club lashes out another £45 million on another forward.

Except this boy is enormous, and quickly improving. He is, with every passing week, more assured of his place in the squad and showing what he can bring.

Here he was a class apart, scoring a couple, winning it back endlessly, teeing up chances – and an Origi goal – and generally showing why he is thought of so highly.

It has taken a bit of time, but Minamino is arriving and will play a big role for the Reds in 2020/21.

Elsewhere, not too many of the irregulars made absolutely convincing cases to remain involved, with one particular exception…

Five goals already in the Liverpool first team, more than one game being a man-of-the-match candidate and a young midfielder good enough to be a regular option for a title-winning team – never mind how good his performance was.

Curtis Jones is a truly excellent footballer, a very exciting young Red who has the world at his feet.

He’s still learning, but he’s in the best place to do so. He has faults in his game, but has the mindset to improve them.

He has thoroughly ridiculous technical quality, and is in the right team to display them.

Two goals owed as much to his first touch and ability to turn as they did to misjudgements from goalkeeper and defender, but his all-round play, work rate, covering back behind the midfield and willingness to pick a pass mark him out as someone who can genuinely, over time, become a first-team regular.

So it’s Arsenal next…and next after that.

The Reds host the Gunners on Monday night in the Premier League and will do so again in the midweek, in the fourth round of the same tournament.

Those games could be very different in pattern due to the players involved in each, and obviously the priority will be the Monday game, but ideally Liverpool will show their dominance and superiority in both.

The games and fixture congestion can produce problems further down the line, but for now, in the absence of the usual seven or eight pre-season games, these cup matches can give important minutes to squad members.

Let’s just save the arguments about priorities, beat them twice and look for which ‘cup’ players are even closer to the ‘league’ team afterwards.