Liverpool’s season continues with a trip to Stamford Bridge, where Jurgen Klopp has named Fabinho to start at the back against Chelsea, while Thiago is on the bench.

The Reds are on the road for the first time in 2020/21, meeting a Chelsea side who have made an abundance of changes throughout the summer.

And following on from Liverpool’s opening day victory against Leeds, there have been two new faces added to the fold at Anfield with both Thiago and Diogo Jota making the move from Bayern Munich and Wolves respectively.

While having been registered in time, our new No. 6 will settle for a place on the bench for this afternoon’s proceedings.

A stern test awaits against one of the teams tipped to be competing for the title this season and Klopp has been forced into a change at the back.

Alisson starts in between the sticks, with a back four of Trent Alexander-Arnold, Fabinho, Virgil van Dijk and Andy Robertson sat ahead of him – with Joe Gomez and Joel Matip both not included in the matchday squad due to “minor” issues.

In midfield, Jordan Henderson will act as the anchor with both Gini Wijnaldum and Naby Keita occupying the positions alongside him.

Mohamed Salah, Sadio Mane and Roberto Firmino will continue to lead the line and round out the XI for this afternoon.

While options on the bench have returned to the regular seven with three substitutions available, Klopp has the likes of Thiago, Takumi Minamino and Kostas Tsimikas to call upon. 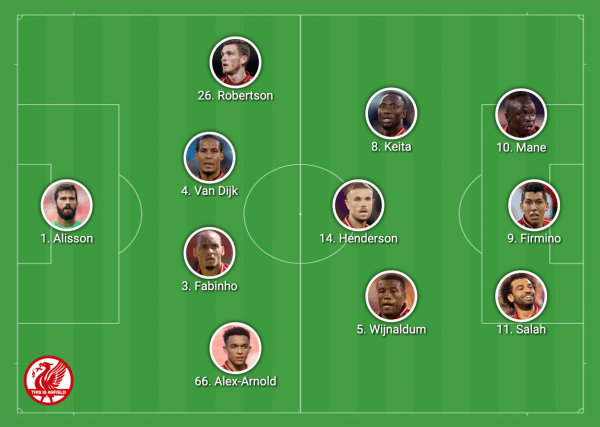