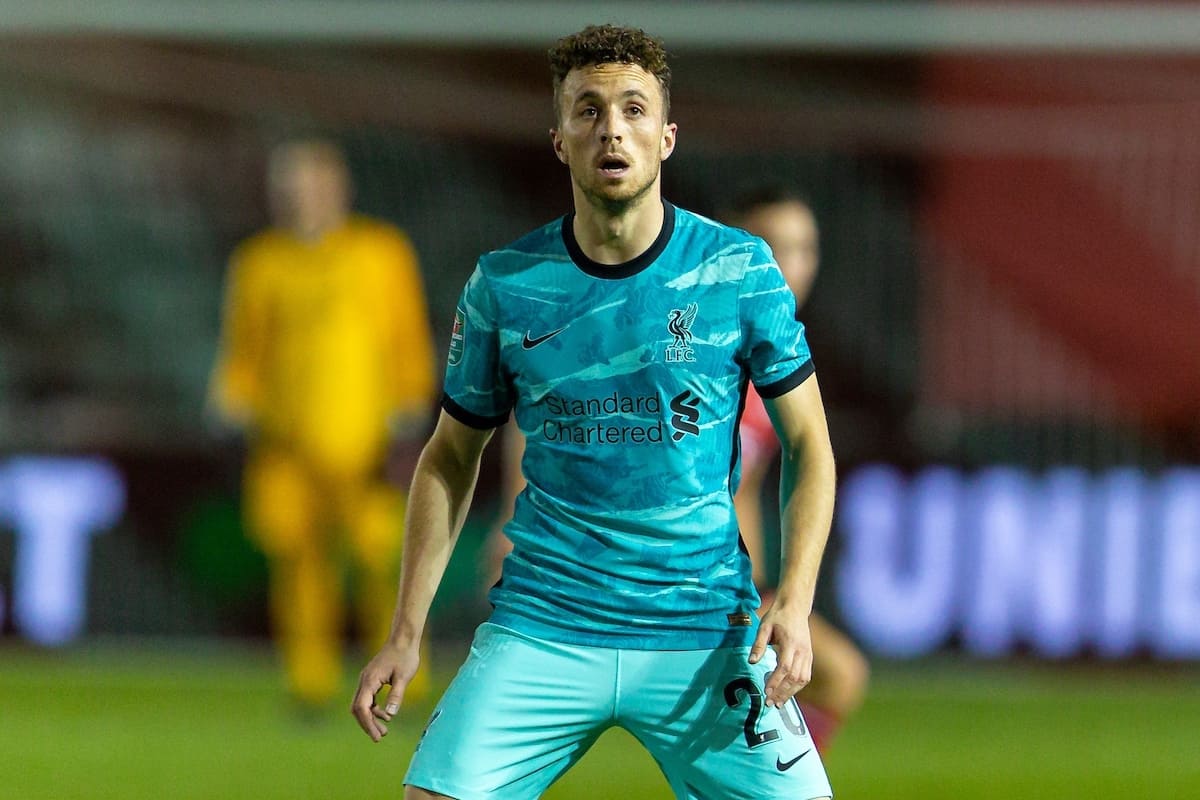 Diogo Jota, Kostas Tsimikas and Rhys Williams all savoured Liverpool debuts on a night that secured progress to the fourth round of the League Cup, thrashing Lincoln 7-2.

The Reds took to the field at Sincil Bank with 10 changes to the side that beat Chelsea 2-0 last time out in the Premier League, with Virgil van Dijk the only player to keep his place.

Tsimikas and Williams both made their first competitive starts for the senior side, while Jota came off the bench in the second half to also mark his Liverpool bow.

Takumi Minamino struck twice and Xherdan Shaqiri, Marko Grujic and Divock Origi all scored in a game that, despite Lincoln’s two goals, was a procession for the Premier League champions.

The standout, though, was Curtis Jones, who grabbed a brace of his own and, speaking to LFCTV after final whistle, vowed to “give 100 percent” again if he is called upon at home to Arsenal in the next round:

“I’m happy [with my goals] but more importantly the boys got the win and we go through to the next round.

“They all count – a goal’s a goal to me. I’m happy the boys got the win and we’re through to the next round.

“Every game that I play it’s an opportunity for me and the rest of the lads. Every game that I’m called upon, I’ve always said that I’ll give 100 percent. It’s what I try to do.

“I think the performances go and show a glimpse of what I’m capable of doing. But I’ve still got a lot to learn and I need to be patient and my time will come.”

It is an admirable mentality from the 19-year-old who, despite added competition with the signing of a world-class midfielder in Thiago, can be expected to feature heavily for Liverpool moving forward.

For Jota, Tsimikas and Williams, they will be hoping this outing was just the first step towards a bright future under Jurgen Klopp, as the trio reflected on social media:

Great way to debut, fantastic win! Ready for the next round ? pic.twitter.com/4HgBTvtPRJ

Happy to make my first competitive debut for @liverpoolfc ?? Now onto the next round!??#godsplan .

A Dream Come True To Make My Debut For This Amazing Club. Even Happier To Complete It With A 7-2 Win. Thanks For All The Support And Kind Messages??#LFC https://t.co/zHGJq0iBha

Elsewhere in the squad, Harvey Elliott admitted it was “great to be back out there,” while both Jones and Grujic hailed a “top team performance”:

Great to be back out there and into the next round! ??

Enjoyable night!! Next round, 2 goals and a top team performance??….also happy to have grabbed man of the match. pic.twitter.com/5B4I5nz8ik

There is never too long without a game for Liverpool, and next week brings two home clashes with Arsenal – one in the Premier League, one in the League Cup – and Van Dijk was among those to move “onto the next”:

On to the next round! pic.twitter.com/XzUpWBuHqG

Next round! Great performance team!! ???

Those who didn’t feature also made sure to praise their team-mates, including Thiago, who is clearly acclimatising well as he wrote “well done mates”:

Thiago and Gini Wijnaldum are expected to return to the side for the Gunners’ visit in the league on Monday night, as Klopp rings the changes again, before rotation in the cup clash which is likely to be scheduled for Thursday.

It is a strange and important week ahead for Liverpool, and one that, after a positive night at Lincoln, can display the real strength in depth at Klopp’s disposal this season.