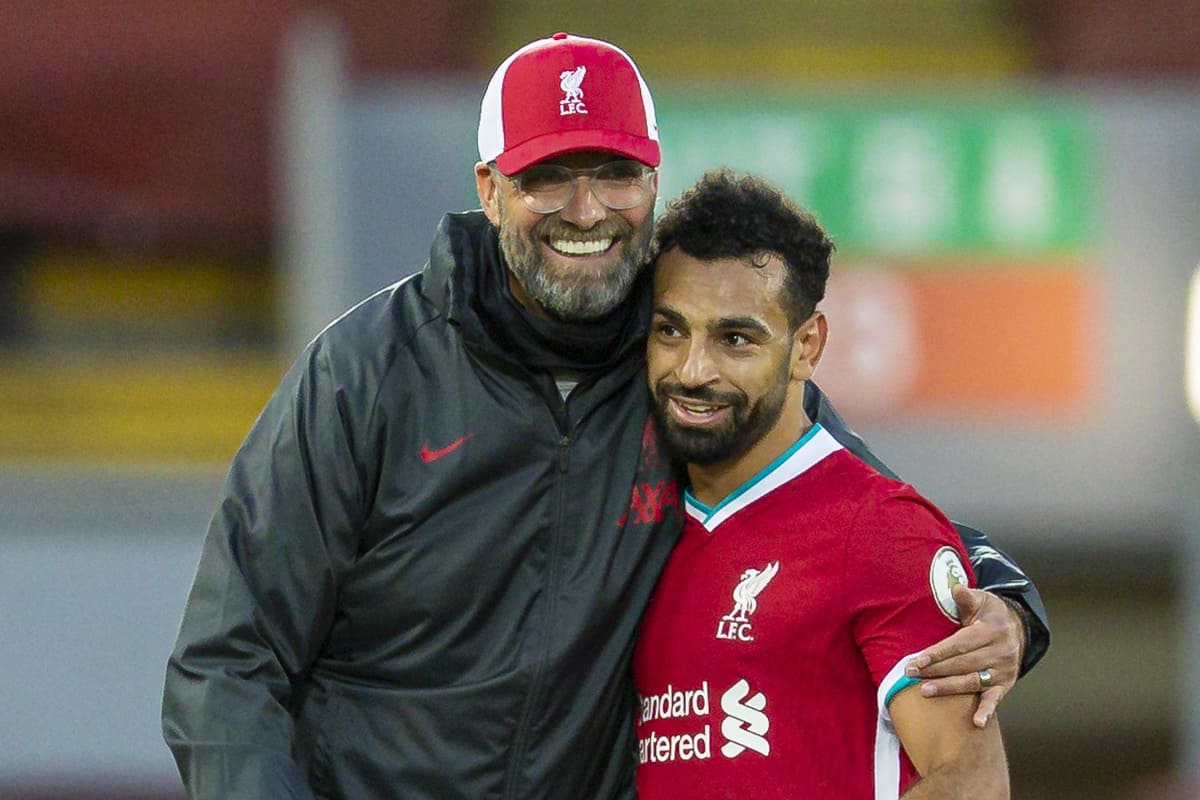 Jurgen Klopp believes Mohamed Salah has a “specific personality” that has allowed him to build on his success every season, rather than settling after a 44-goal debut.

In the wake of Salah’s hat-trick performance against Leeds, much has been made of his ability to succeed Lionel Messi and Cristiano Ronaldo as the world’s best player.

Whether the Egyptian will take up the mantle is subjective, but there is plenty of evidence to suggest he is already one of the finest in football.

Ninety-seven goals in 154 games for the club goes a long to way in highlighting why his reputation is so strong, and to notch 23 or more in each of his seasons at Anfield so far is, in Klopp’s eyes, a testament to his desire.

“He deserves credit for that,” he told reporters ahead of Liverpool’s trip to Chelsea.

“A lot of things we do help him to be the player he can be, that’s true, as a team, and he knows that. But apart from that, you need to have a specific personality to invest so much.

“And by the way, he’s not the only one in the squad who’s doing it, but he’s doing it as well.

“You asked the right question when you say he scored about 40 goals in the first season, and quite a few players would say ‘that was nice, and now let’s think about other things, how we can make life even more beautiful’, but not life on the football pitch, the other part of life.

“He’s exactly the opposite. He stayed greedy, he stayed very determined, his work rate around the games is exceptional.

“So he’s super professional, that’s the truth. If you would write a book about how to stay successful, and the training things he is doing, we are doing, in between the games, that’s one key.

“All players do what you tell them, but it’s about how important you see it yourself that it is, because that gives you a completely different mindset.

“You want to be on top of your own potential, and that’s what he wants.

“The numbers are just incredible, that’s true, and I was really happy for him for this game.

“And we said after the game, yes there were two penalties and if you didn’t see the game you would think ‘yeah, two penalties and a goal, nice’, but if you saw it, this game was a three-goal performance, 100 percent, if not more.

“So yes, good start, long may it continue.”

There have been some suggestions, however, that Salah is not fully appreciated among some sections of the Liverpool support, though after the 4-3 win over Leeds last weekend, Virgil van Dijk insisted this media-fuelled.

Klopp stressed that none within the club underestimate the importance of their No. 11, who is expected to “work his socks off” like any other player.

“I think the Liverpool supporters know exactly what we have with him,” he continued.

“I heard something that Virgil said: ‘It’s not us, it’s you’. So in the team, absolutely, [he’s appreciated] 100 percent.

“It’s not that we carry Mo because he scores so many goals in the sessions, and tell him ‘please, that’s your spot, now finish the situation off’.

“Everybody expects from him, like everybody else, that he works his socks off in each session.

“That’s the truth, but that doesn’t mean that we appreciate 100 percent what we have with him.

“[It is] exactly the same with the other players. Because I think that the last year, everybody was saying Sadio Mane, and what a player he is.

“Now he didn’t score three goals in the first game, and now we put one on the pedestal and forget the other one, and Bobby played in between and all that stuff. So these kinds of things, we are not like this.

“The story this team wrote together is because they constantly push each other.

“But the appreciation between each other couldn’t be bigger, they like playing together and they really respect each other, so that’s the situation.

“I don’t know how the public sees Mo Salah actually, if you ask me then I can hear a little bit that obviously there’s different views, but I didn’t know it.”