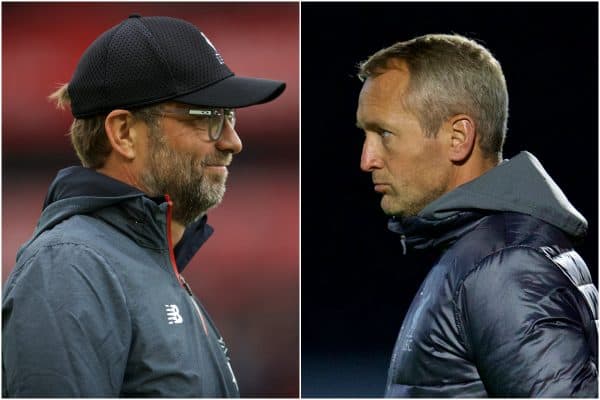 Klopp vs. Critchley in Anfield friendly – Liverpool vs. Blackpool Preview

Jurgen Klopp comes up against a familiar foe on Saturday at Anfield, with Liverpool’s former under-23s manager Neil Critchley leading Blackpool into a pre-season friendly.

The Reds’ preparations for the new campaign culminate this weekend, with the visit of a Blackpool side who, nine years after their last meeting, find themselves in League One.

Building on clashes with Stuttgart, Salzburg and Arsenal, this is the final friendly of pre-season for the champions of England, and it could be a useful runaround.

Still played behind closed doors at Anfield, this tie will give Klopp the chance to work on a number of changes to his side, while coaxing form out of those set to keep their key roles in 2020/21.

So what can we expect as Liverpool gear up for their final pre-season friendly? Here’s all you need to know.

The international break has been relatively kind to the Reds, despite 11 first-team players being absent.

Divock Origi has pulled out of the Belgium squad, however, and is training ahead of the visit of Blackpool, along with Jordan Henderson, Joel Matip and Xherdan Shaqiri, who are all back from injury.

The lack of defensive depth could see Klopp field the likes of Nat Phillips, Billy Koumetio, Sepp van den Berg and Ki-Jana Hoever, along with the prospect of more callups from the academy.

But the manager is boosted as key players such as Alisson, Fabinho, Naby Keita, Mohamed Salah, Sadio Mane and Roberto Firmino are all fit and ready.

Alex Oxlade-Chamberlain is the only player out with an injury.

A decade on from their impressive but ill-fated season in the Premier League, Blackpool are in League One and facing a major overhaul.

Critchley took over in March, vacating his role with Liverpool, but with the season curtailed soon after, he was able to start afresh this summer, and this has brought 10 signings so far.

They include ex-Liverpool midfielder Jordan Williams, who arrived on a free after a spell with Rochdale, but the Tangerines saw Jay Spearing leave among nine to depart on the expiry of their contracts.

Blackpool’s season has already begun, and Critchley’s side suffered defeat in the first round of the League Cup on August 29, holding Stoke to a 0-0 draw only to lose 5-4 on penalties.

Liverpool lost both of their meetings with Blackpool last time they were in the top flight together in 2010/11, with 2-1 defeats at Anfield and Bloomfield Road.

Charlie Adam was the Tangerines’ opening goalscorer in the Anfield clash, with the result leaving the Reds in 18th on October 3.

Roy Hodgson was not long for the job, and January’s trip to Blackpool saw Kenny Dalglish‘s side suffer the same fate as before, only by this point Liverpool were up to 13th, four places behind the Tangerines.

The Reds went on to sign Adam seven months later, with the midfielder arriving in a £6.75 million deal only to head off to Stoke after a year on Merseyside.

Liverpool vs. Blackpool will be shown live on LFCTV, with coverage starting at 2.30pm (BST) ahead of the 3pm kickoff.

Henry Jackson is on liveblog duty for This Is Anfield, and will be keeping you up to date on the final friendly of pre-season from 2.30pm.