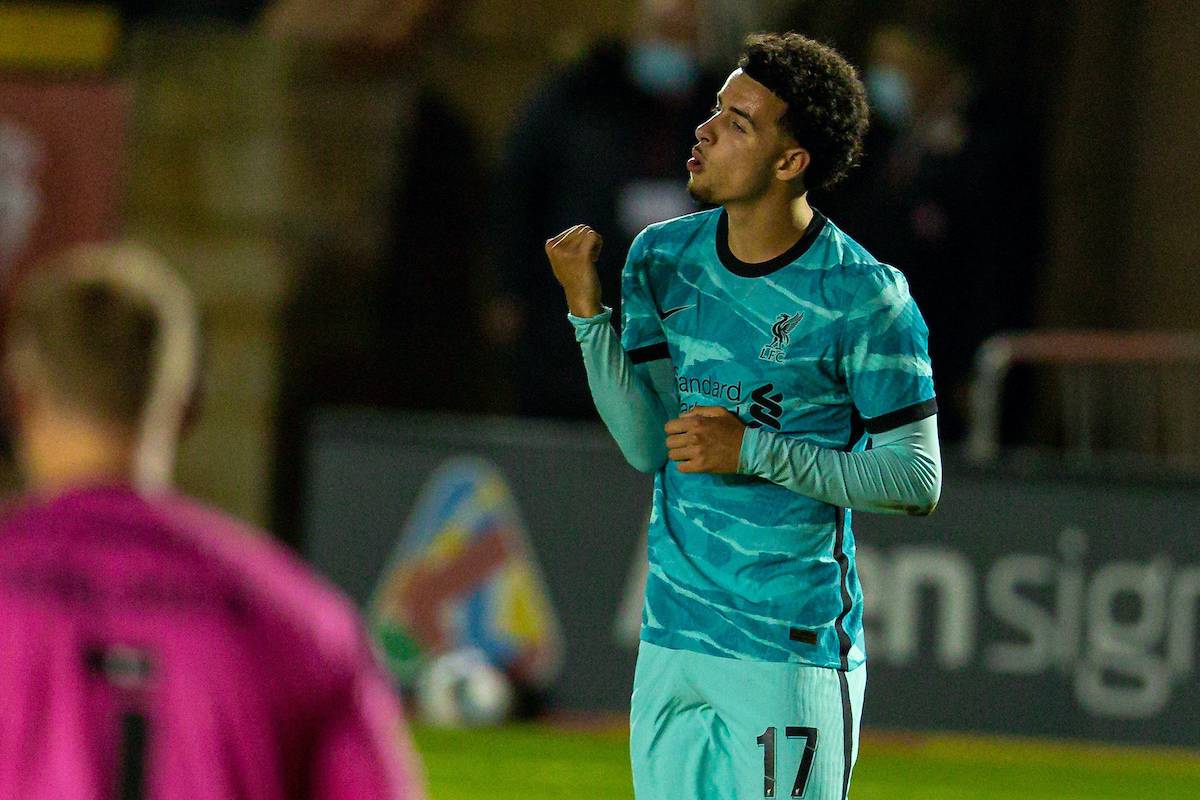 Jurgen Klopp has insisted the “door is open” for Curtis Jones to make his mark with Liverpool’s first team, but there is still plenty of room for improvement.

The 19-year-old hit the headlines once more for his Man of the Match display against Lincoln, netting an impressive double in a standout display across the 90 minutes.

Jones has grown leaps and bounds since the start of last season, having made his Premier League debut, scored his maiden goal in the competition and clinched a winners’ medal.

And in his first outing in 2020/21, the No. 17 made an early statement of intent to help guide the Reds to a convincing 7-2 victory, one where he showcased his unflinching confidence and conviction in his own abilities.

It is a quality which has enamoured many, including Jurgen Klopp as any successful football player needs to be able to perform when the pressure is on and all eyes are on you.

He faces ever-increasing competition for places in midfield, but the manager has made it known that the “door is now open” for Jones to continue moving forward as the “plan is to use him as often as possible.”

“Confidence for football players is really important because you, usually, play in front of 30, 40, 50, 60, 70,000 people and without confidence that is not possible, I can tell you,” Klopp said.

“So it helps, obviously. Doing the right thing in the right moment helps as well and that’s what he had to learn in the last few years because he was absolutely exceptional and maybe the top player of each age group he was in.

“It means he had to learn to play together with other players and he made massive steps in that department, had brilliant role models in the squad and now the door is open.

“It’s about him. I don’t want to make the performance [vs. Lincoln] smaller than what it was because it’s absolutely exceptional, the way he scores and the way he contributes to the game. That’s all really exceptional.

“But Curtis knows himself there’s a lot of space for improvement. So being involved in a game over 90 minutes, really being involved – not only on the pitch and these kinds of things.

“There’s space for improvement, it’s good. He’s a hard-working boy and he loves all the feedback, information and analysis we give him – he’s in the best hands with Vitor Matos.

“All the young boys are. I am the manager but Vitor is their coach, they are part of our training obviously but you cannot analyse each player every day and give them the feedback, but with the few young boys we have we can do that.

“I think we’re in a really good situation at the moment, the plan is to use him as often as possible because of the way he performs.”

At just 19 years of age, Jones has not come close to hitting his ceiling and Klopp will continue to temper expectations over one of his brightest young players.

And Jones can expect more game time against Arsenal in the League Cup on Thursday, with a much-changed squad expected following on from the Premier League meeting against the Gunners on Monday.