Liverpool have learned the five biggest sides they can draw in the group stage of this season’s Champions League, as the four pots for the upcoming draw become clearer.

The Reds will enter the Champions League group stage draw in Pot 1, after winning the Premier League for the first time last season.

Liverpool can, therefore, not be drawn against any of those sides in the group stage, with one from each of Pots 2, 3 and 4 to be their opponents for the rest of the year.

Tuesday night saw Benfica lose their third qualifying round clash with PAOK, which relinquished the final spot in Pot 2 to Ajax.

With the Reds unable to meet fellow English sides in the group stage, that leaves just five sides from Pot 2 that they can be drawn against.

Along with Ajax, those are Barcelona, Atletico Madrid, Borussia Dortmund and Shakhtar Donetsk, with Man City, Man United and Chelsea all ruled out.

These five present a mix of interesting clashes for Liverpool, including the side who knocked them out of last season’s tournament, Atletico, and the one they famously humiliated in the semi-finals in 2019, Barca. 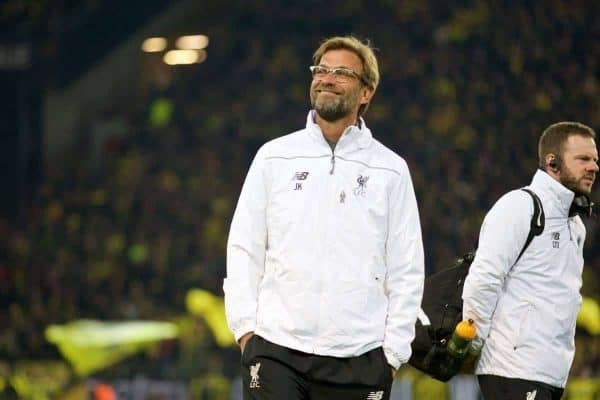 Dortmund would be a romantic draw for Jurgen Klopp, while Ajax would be a rare opponent for the Reds, with the two sides having only met twice before in competitive games, both being in 1966.

Shakhtar would be the most difficult in terms of travel, but would also ensure a first-time meeting.

RB Leipzig, Inter Milan, Lazio and Atalanta are already confirmed for Pot 3, and are most likely to be joined by Dynamo Kyiv, Salzburg, Olympiakos and Krasnodar.

Pot 4 includes Borussia Monchengladbach, Rennes and Istanbul Basaksehir, with the likes of Lokomotiv Moscow, Marseille and Club Brugge qualified and potentially included too.

The draw for the Champions League group stage will be held at 5pm (BST) on Thursday, October 1, with the final pots to be determined by September 30, when the playoffs are concluded.