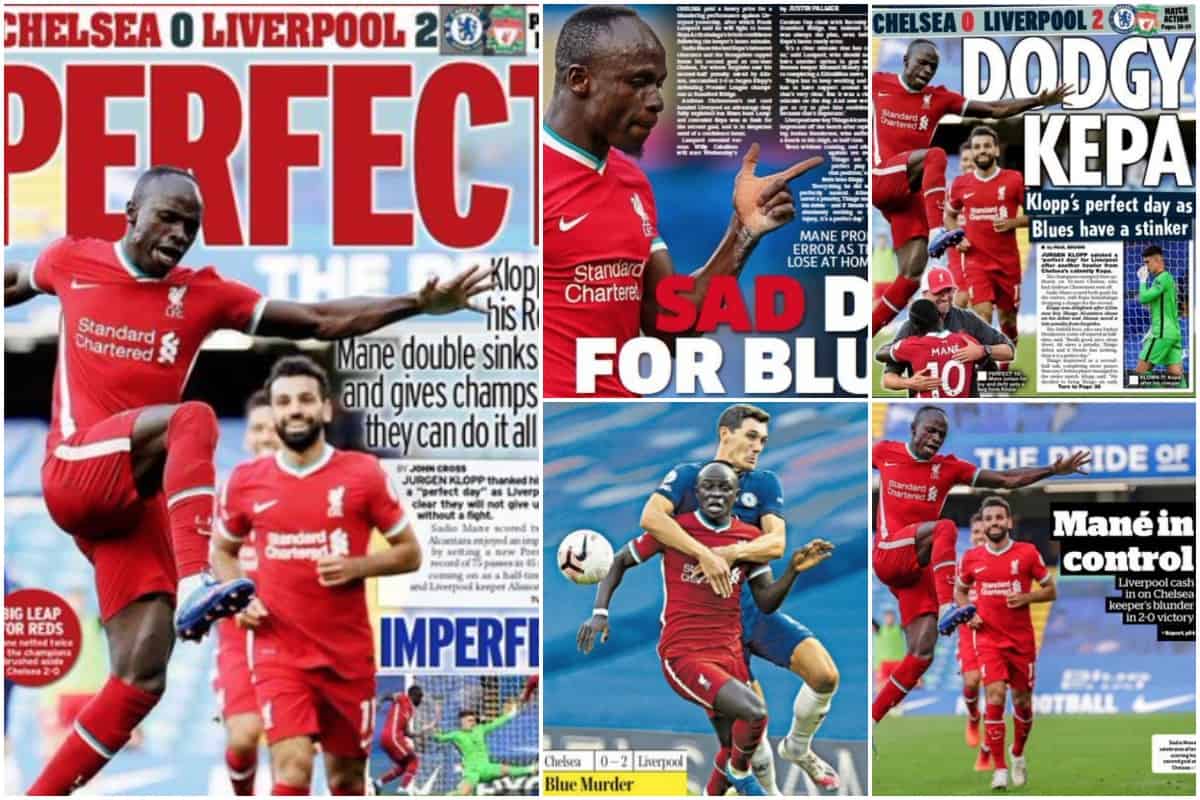 The media were impressed by Liverpool’s complete performance in the 2-0 win at Chelsea and felt the victory was a “powerful” statement on the Reds’ title ambitions.

The reigning Premier League champions made it two wins from two with a thoroughly deserved victory at Stamford Bridge.

Sadio Mane’s match-winning brace earned an excellent three points, as Liverpool got their rewards for a dominant and much more complete performance than produced in the season opener.

Jurgen Klopp will be delighted with his team’s efforts, and here’s all the key analysis from the media on the victory.

The BBC’s Phil McNulty wrote exactly that as he praised the Reds for maintaining the same level of hunger:

Liverpool delivered a powerful statement of intent about their desire to retain the Premier League title with a comfortable dismissal of Chelsea at Stamford Bridge on another nightmare day for keeper Kepa Arrizabalaga.

Liverpool, on the other hand, demonstrated their hunger and desire has not been reduced by the club’s first title in 30 years. If anyone wanted an answer to whether the glory of last season will lessen their appetite, it came here.

The Mirror’s John Cross wrote that the Reds gave an “emphatic answer” to questions on whether they could retain the title:

The big question all summer has been whether Liverpool can retain their title. They delivered the answer in the most emphatic fashion at Stamford Bridge with a ruthless, clinical and brilliant victory which shows they are still the team to beat.

The Mail’s Martin Samuel thought the performance, and collective effort of the squad, showed just how difficult it will be to take the crown off Liverpool:

No matter the array of gifts from Chelsea, this was the performance of a team the rest must beat.

So Liverpool had moments of good fortune but, mostly, this was a reminder of how difficult it will be to depose the champions. This is an outstanding squad, confirmed by the way Fabinho fitted seamlessly into the centre of defence.

Matt Stead, for Football365, believes Klopp’s side are now the title favourites, with Man City already having to play catch up:

They probably should have been favourites. They surely are now. Manchester City, through no fault on their own, are already fighting an uphill battle to catch up, never mind keep up. No other team is close.

Reporters felt this was the day the Reds rediscovered top form, with a ‘complete’ performance too good for Chelsea…

Writing for Goal, Neil Jones noted how it was pleasing to see Liverpool produce a complete display after the opening day chaos, and claim a welcome clean sheet in the process:

And so the champions roll on. Not top of the league at this stage – that honour goes to neighbours Everton – but very much back in business, and picking up a valuable clean sheet thanks to Alisson Becker’s first penalty save for the club.

An article on ESPN.com stated that this performance felt like Liverpool rediscovering their best form after the post-title-win drop off:

It felt like a “return to form” for a side that’s notably been a couple of gears below its best since clinching the 2019-20 Premier League title back in July.

McNulty was particularly impressed with the sheer dominance of the display, noting how the Reds were “head and shoulders” above Chelsea even at 11 vs 11:

Liverpool were helped by Christensen’s moment of sheer panic that reduced Chelsea to 10 men right on the break – but they were head and shoulders ahead of a negative home team even before that crucial moment.

The champions dominated from the first whistle and it seemed only a matter of time before they scored, pinning Chelsea back in their own territory and probing for openings at will.

Liverpool have continued their art of reacting to setbacks by just shrugging them off and getting the job done. Beyond personnel, the west Londoners can draw from their mental resilience.

Stead applauded Klopp’s side for playing with patience after Chelsea went down to 10 men, when it could have been easy to grow frustrated and lose composure:

The one hallmark of Liverpool’s approach was patience. Even when Chelsea were managing to keep them at bay there was no sense of panic or apprehension.

They simply maintained their tempo – Thiago was key upon his half-time introduction – and kept their heads.

Cross detailed how the recent transfer business inspired the improved performance, with new faces already “re-energising” the squad with competition for places:

Sadio Mane scored two remarkable goals to carry on his unstoppable title-winning form from last season but it also highlighted the value of re-energising the squad.

Thiago Alcantara was a half time substitute and the £20m midfielder showed his quality while fellow new boy Diogo Jota will have to wait for his debut but his arrival only goes to prove that sometimes just merely having a new face can freshen things up.

Journalists lauded Mane and Fabinho’s performances, and felt Thiago instantly showed his class and what he will offer going forward…

McNulty praised Mane’s match-winning influence and labelled the No.10 a “world-class” operator:

And when the breakthrough came, no-one deserved it more than Mane, now comfortable in world-class and willing to do the dirty work as well as apply the finishing touches.

Richard Jolly, writing for The National, reflected on the sharp starts to the season made by Mane and Mo Salah:

Two league games into their season and Liverpool have twin examples of the destructive impact of their outstanding attackers.

Jones also commented on their electric starts, and pointed out how it is almost impossible to stop the Reds when both are in such form:

That’s the thing with Liverpool. If Salah doesn’t get you, Mane will.

That is five goals between them already, and with the Reds able to give a debut to new signing Thiago Alcantara at Stamford Bridge, the signs are ominous for the chasing pack.

Jones later labelled Fabinho’s performance as “masterful” and assessed that the Brazilian proved he will be more than a reliable option to step in there when called upon:

The Brazilian was masterful alongside Virgil van Dijk. Do not be surprised to see him play there again as the season progresses.

The Mirror’s Jake Polden praised Fabinho for dominating Timo Werner and pondered whether the Brazilian could even become first choice partner to Virgil van Dijk given how he “excelled” in the role:

He excelled in the position. Most centre-backs comfortable playing in the position week-in, week-out would feel an element of nervousness coming up against Werner for the first time. But Fabinho took the whole thing in his stride, and actually got the better of him.

His performance has given Klopp a lot to think about, given the fact that Joe Gomez and Joel Matip are injured for the foreseeable future and the German needs to find a permanent place for new signing Thiago. Perhaps we could see Fabinho play centre-back more often?

Cross, along with practically every journalist, was mightily impressed with Thiago’s debut and labelled the No.6 the ‘conductor’ in Liverpool’s orchestra:

But neither made the sort of impact that Thiago had on Liverpool’s performance. The Spain midfielder was magnificent as he was always in space to receive the ball, pick a pass and give another dimension to Jurgen Klopp’s side. He looked like an orchestra conducting a symphony.

And the Mail’s Dominic King thought Thiago showed how he will offer a new dimension with his supreme passing range and speed in possession:

The right addition at the right time, however, can have a profound effect and it was easy to see in those first few moments after Thiago had been introduced what he will do for Liverpool and the impetus he will give to their play, with pinball passing.

Everything seems to be done with one touch, nearly always forwards. His head is constantly up, his eyes darting around the pitch to see which avenue will open next. There is ingenuity in his mind, creativity in his feet and Chelsea had no idea how to close him down.