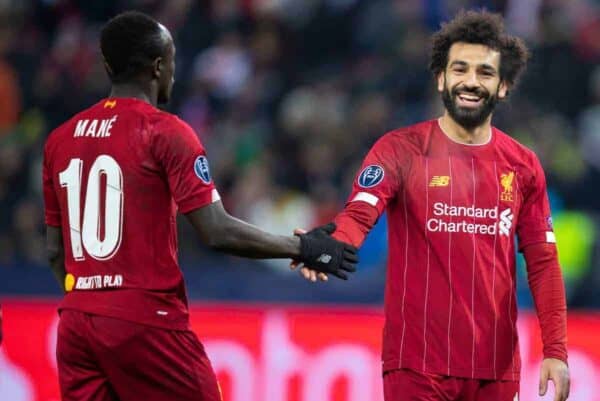 It’s hard to believe that Sadio Mane and Mohamed Salah‘s ‘spat’ at Burnley was less than a year ago – and Andy Robertson has revealed how the defenders quite enjoyed it!

When Mane showed his frustration after being subbed in the 2-1 win at Turf Moor last October shortly after Salah had taken on a shot rather than pass to his teammate, we had days of headlines about the two attackers apparently not seeing eye to eye.

The reality, though, is far from what the media had you believe, as Andy Robertson has revealed in an extract of his new book ‘And Now You’re Gonna Believe Us.’

I was in the shower with Mo and Sadio at Burnley…

When I get something wrong on the pitch I don’t need anyone to tell me but it happens anyway. Whether it’s a glare from Virg or a bollocking from Hendo, it’s all part of what we do and who we are.

Stuff like that happens so often in games that everyone is used to it – it hardly ever provokes any interest and when it does, it tends to be nothing more than a few funny gifs on social media.

As we discovered at Burnley, though, there are exceptions to that when a brief spat between team-mates is made out to seem so big that it overshadows everything else. Ask anyone what they remember about that game and it will almost certainly be Sadio having a bit of a rant when he was taken off because Mo hadn’t set him up for a shot on goal a minute or two earlier.

The mad thing is, this was our most complete performance of the season to that point. The control we had, the chances we created, the goals we scored, how tight we kept things at the back against a difficult opponent – it pretty much had all of the qualities that we strive for. The only problem is it isn’t recalled for those reasons, not outside of the club anyway. All anyone talks about in relation to that game is Sadio falling out with Mo.

Maybe I misread this, but I’m pretty sure Sadio was reacting to me not getting brought on ?????? #getmillyon #thanksmate

I can’t think of too many other workplaces where everyone can perform at their best but it’s forgotten about because a couple of blokes had words with one another. That kind of disagreement is part and parcel of every walk of life but in football it makes headlines and I don’t think that is going to change any time soon, so as players we just have to accept it.

The lads themselves found the reaction funny which puts it in its proper perspective. In an ideal world we would avoid sounding off in front of the cameras because we know the fuss it can bring and the scrutiny that can follow.

The incident itself was pretty standard and the kind of thing you would expect. As someone who doesn’t get into scoring positions too often, I’m probably not best placed to judge it. It’s safe to say that it was the kind of thing that you see on the football pitch all the time, with one player opting to shoot when another is expecting a pass.

Mo was accused of selfishness in some quarters but his single-mindedness in front of goal is one of his greatest assets and it’s certainly helped us to win countless games. Similarly, Sadio was entitled to want the ball because he was in such a good position.

If Mo had scored, Sadio would have been the first to congratulate him but it didn’t work out that way and Sadio let his frustration show.

It was brilliant for the lads at the back. We have dozens of arguments every game so we got to enjoy this one, especially with it becoming a national talking point within seconds. It was something and nothing but the main thing was we had got another win to maintain our perfect start to the season.

#mane firmino knows that the dressing room is going to be lit pic.twitter.com/LPu00Sct6f

I was in the shower with Mo and Sadio afterwards. I was right in between them and they were both laughing and joking. People don’t see that – they only see what happens on the pitch, but behind the scenes the spirit in our dressing room is top class.

Yes, we will have disagreements on the pitch. Like any other industry, football has a creative tension and that inevitably leads to moments when we will disagree but as long as that’s all it is it’s not a problem.

That was the way the gaffer saw it and we moved on from it straight away which was important because it didn’t give anyone the opportunity to stir things up. In hindsight, it may well have been a good distraction too because while everyone was focusing on Mo and Sadio, no-one was really talking about how well we had played which was helpful as it allowed us to keep going about our business without our form getting as much attention as it would have done otherwise.