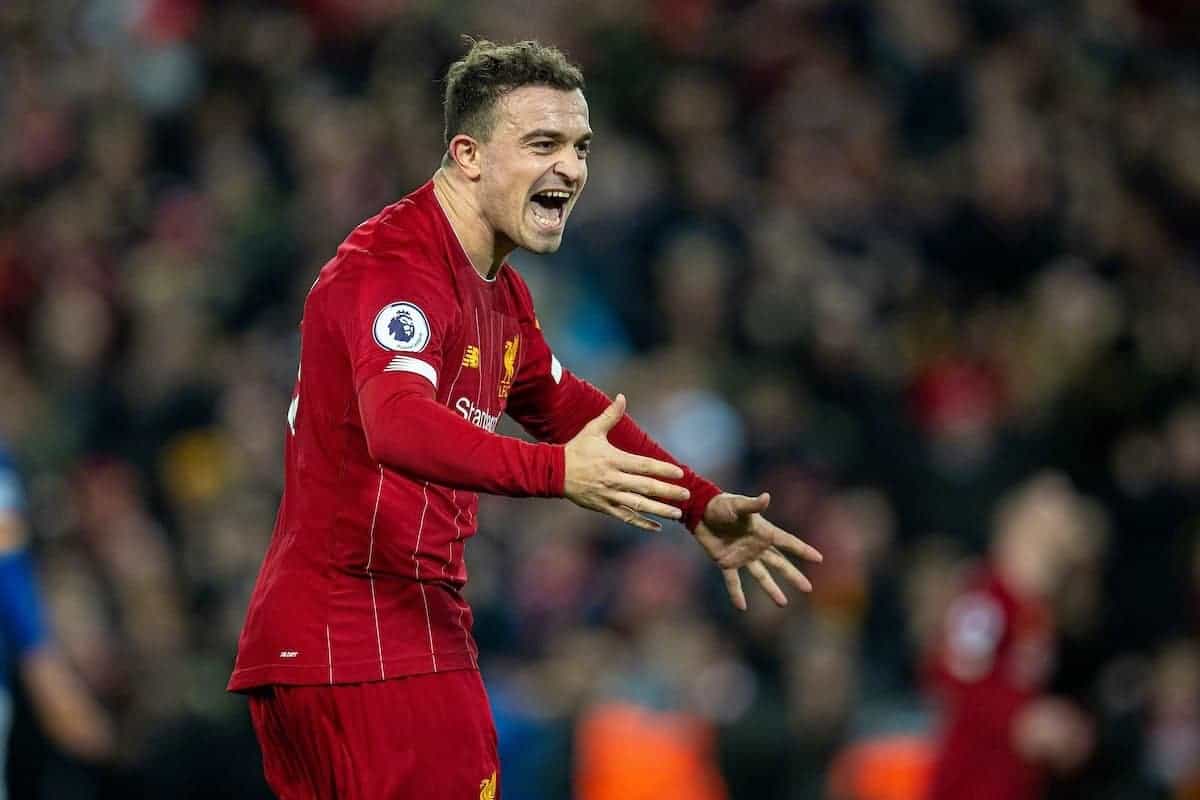 Xherdan Shaqiri is widely expected to be leaving Liverpool this summer, but eager to stay and replicate his 2018/19 form, Jason Hughes believes he could be a useful option.

Last week saw Xherdan Shaqiri return to first-team training at Melwood with a hairline so impressive it will feel like a new signing.

Having missed out on much of Liverpool’s truncated pre-season following an injury-ravaged year, the Swiss international has become a forgotten man at Anfield.

However, a fully fit Shaqiri could offer Jurgen Klopp an interesting rotation option with the Reds currently struggling to upgrade on their current fringe players. 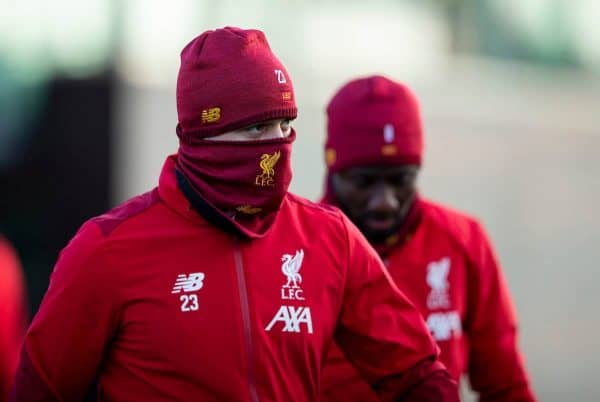 Persistent fitness problems hampered Shaqiri throughout the 2019/20 season, with Klopp admitting that Liverpool were yet to find the “solution” to the 28-year-old’s recurring muscle injuries.

These issues saw Shaqiri miss a number of cup games he would have otherwise expected to feature in, exacerbating his struggle for playing time as he was reduced to a virtual spectator, playing just 182 minutes of Liverpool’s league campaign.

Shaqiri’s failure to find fitness or the favour of his manager has led many to believe that he would depart the club this summer, with members of the Merseyside press reporting in January that the Swiss would be allowed to leave for around €30 million.

However, while the transfer window remains open, such a move has so far failed to materialise, with Shaqiri among a number of fringe figures the Reds have struggled to move on in their attempts to fund incoming transfers.

Buying clubs are seemingly unwilling to meet their valuations in a volatile financial landscape. 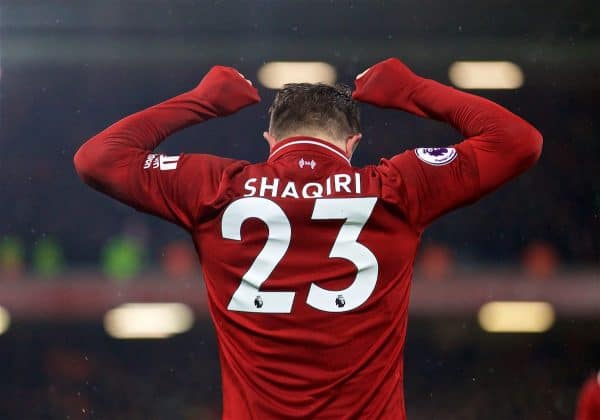 While Liverpool’s No. 23 may still be sold should a suitor meet his valuation, Shaqiri himself has spoken of his excitement at the opportunity to “play like the first season,” as he seeks to re-establish himself as an important member of Klopp’s squad.

With the club feeling the effects of COVID-19 on their finances, a fully fit Shaqiri could prove to once again have a telling impact on the season as Klopp seeks in-house solutions.

Despite his struggles last term, the 2018/19 season saw Shaqiri feature 24 times in the Reds’ 97-point league campaign, racking up 1,059 minutes on the pitch.

While not a key player, he offered a viable option for rotation and made a crucial impact in a number of important games.

That season saw the Swiss international notch six league goals, including a memorable double to sink Man United at Anfield.

Shaqiri’s tally was bettered only by the front three that season, and interestingly would’ve made him the Reds’ fourth-highest scorer in the league again last season, despite Klopp’s side romping to the title.

Gini Wijnaldum, Alex Oxlade-Chamberlain and Divock Origi were joint-fourth, with four each.

Shaqiri’s impressive ratio of a league goal every 176 minutes in 2018/19 demonstrates his ability to make a decisive impact during his limited playing time, an attribute that was arguably lacking among Liverpool’s squad players last season.

He also contributed five assists in all competitions, the most notable of which was the pinpoint cross for Wijnaldum to wipe out Barcelona’s lead in the Champions League semi-final, once again highlighting the diminutive winger’s knack of making telling contributions in the final third when it matters most.

Questions remain over his long-term future, as well as his ability to stay fit, however in 2018/19, Shaqiri provided vital contributions and proved himself to be an effective option for Klopp.

If he can replicate the fitness and form of that first season, he undoubtedly possesses the ability to make a tangible impact on the Reds’ season once again.

Much has been made of Klopp’s flirtation with a switch to a 4-2-3-1 formation during pre-season, with the system seemingly ideal for getting the best out of players like Takumi Minamino who prefer to drop deep in order to find pockets of space.

If this tactical switch is to become a regular feature for Liverpool this season then it may offer a route back into the side for Shaqiri, whose lack of pace makes him ill-suited to the wide positions in Klopp’s 4-3-3.

He is arguably more suited to the right-hand side of a 4-2-3-1 formation than many of the Reds’ other attacking options, with his technical ability and creativity allowing him to link the play from deep.

In fact, Shaqiri started on the right in seven of the 11 games in which Klopp deployed a 4-2-3-1 during the 2018/19 league campaign, with the Reds boasting an unbeaten record in those games.

The 28-year-old’s creativity from a slightly deeper wide position added another dimension to Klopp’s side, with the Swiss able to cut inside and exchange intricate passes with his fellow attackers.

Shaqiri’s progressive passing saw him play 1.7 key passes per 90 in the league that season (fourth of players with 500+ minutes), while his range of passing also allowed him to quickly switch the play when required, averaging three accurate long balls per 90 (more than any other attacker).

A change in formation could therefore benefit Shaqiri, with his technical proficiency making him a viable creative outlet for Klopp on the right of a 4-2-3-1.

If not for a global pandemic Xherdan Shaqiri would probably no longer be a Liverpool player, and Klopp will no doubt seek an upgrade long-term.

However, in a climate of financial uncertainty, the Reds’ need for in-house solutions to an intense fixture list may offer Shaqiri a chance to revive his Liverpool career.