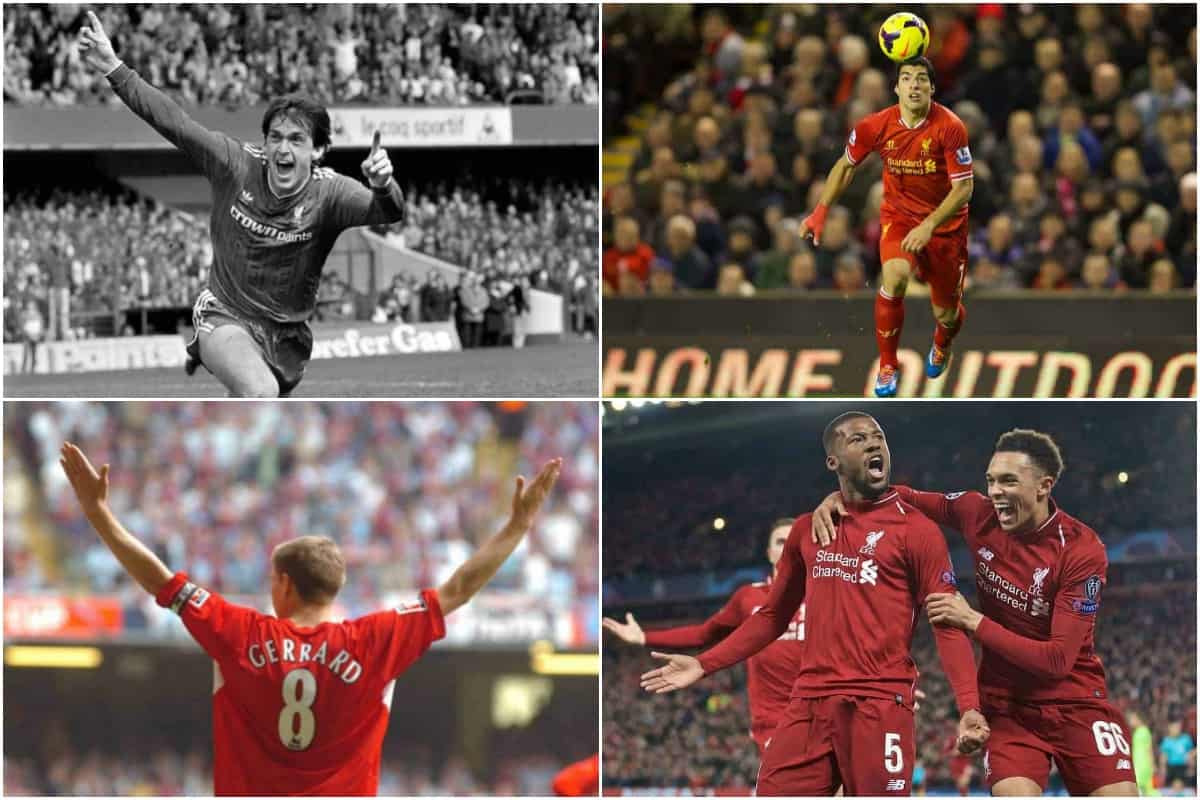 By edging Liverpool into the lead against Midtjylland, Diogo Jota etched his name in the record books as he became the player to score the 10,000th goal in the club’s history.

The landmark milestone dates back to the club’s inception in 1892, with Jock Smith scoring the first in their maiden competitive appearance against Higher Walton in the Lancashire League.

In the 128 years between the first goal and Jota’s effort, Liverpool have seen a multitude of jaw-dropping strikes, match-winners, individual and team brilliance come to the fore – with a mix of clumsy finishes and own goals along the way to match.

Within that, the Reds have seen talent from across the world on the scoresheet, many of whom have contributed to the 48 major first-team honours which have been added to the trophy cabinet.

Some of the 10,000 goals will prove more memorable than others for a myriad of reasons and here we take a look at the favourites of This Is Anfield’s writers and other fans.

This Is Anfield’s writers inspired by emotion & skill… 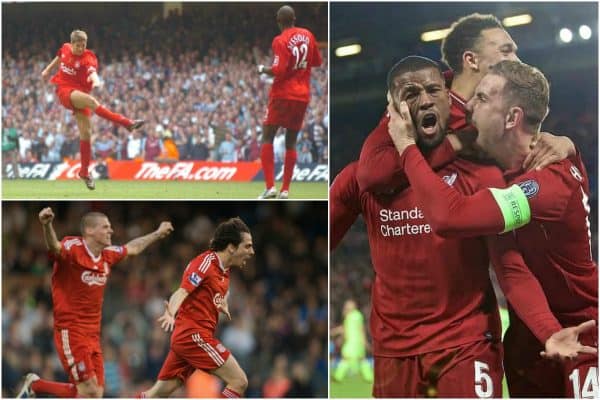 HENRY JACKSON: I could say Champions League final goals or other incredible Anfield moments, but I’ll go with Benayoun against Fulham in 2009.

I’ve rarely celebrated a Liverpool goal more, because the ball wouldn’t go in all afternoon and it felt like our title chances were gone.

Then Yossi popped up in stoppage time and it was glorious. At that point, I thought the title was finally coming back to Anfield. Then Macheda happened, which still kills me to this day.

Also a little mention for Gary Mac’s winner at Everton – my 14-year-old self broke my mum and dad’s sofa celebrating!

MATT LADSON: A top five for me, in no particular.

JOANNA DURKAN: Very tricky, this. A number of Luis Suarez and Steven Gerrard ones are up there but I’ve gone for the emotive choice and the one that immediately springs to mind and that’s Gini Wijnaldum’s header against Barcelona.

There is obviously a recency bias and it’s not at the top for skill per se, but more for the reaction it caused.

I was lucky enough to be in the ground and I just remember the faces of pure joy and disbelief and the wall of noise which followed – talk about goosebumps. I’d have said the Origi one but I only caught a bit of it and no one seemed to know what the hell happened!

JAMES NALTON: I’d probably go with John Barnes vs. Southampton in December 1996. It’s one of the first goals I remember from around the time I began to become interested in football as well as rugby.

It just showed how much faith Barnes still had in his own ability and technique to shoot from there, and it slowly trickled over the line despite Dave Beasant’s best efforts to scramble back across his goal.

I think it sticks in my head as much for Beasant ending up in the side-netting and hitting the post as much as Barnes’ audacious effort itself!

They were also wearing the ‘ecru’ Reebok kit which I remember everyone making a big thing of after Adidas kits of previous years.

One of the ones I remember the most was king Kenny against Chelsea in 86 to win us the league.

My first Merseyside Derby I went to was at Anfield in 1987-88 season. We won 2-0 and Peter Beardsley finishes off a great move at the kop end with a shot which rattles in off the crossbar. We marched on to a 17th league title. This was the start of a love affair with Liverpool FC

Recency bias maybe, but how do you top Origod’s goal to put us through to the UCL final 4-3 over Barça? Messi was brilliant and ran roughshod the first leg at Camp Nou. The odds of us getting 4 and giving nil must have been minute at best. That goal gave us No.6

so many wonderful goals but when Smicer's went in at Istanbul, I began to believe the football gods were on our side. https://t.co/ssiD0a6X1Q

Gerrard and the olympiakos goal

Incredible goal, immense stakes, last seconds... if it happened in a film you wouldn't believe it!

Fernando Torres’s volley vs Blackburn for sure https://t.co/EtJZbF1fRN

Too many but Riise free kick against united was incredible.

Let us know your favourite Liverpool goal from the 10,001 to choose from so far in the comments section.