Jurgen Klopp has made nine changes as Liverpool on Arsenal for the second time this week, with Mohamed Salah among the starters in the League Cup fourth round.

The Reds are looking to follow up their 3-1 win over the Gunners last time out, and the 7-2 thrashing of Lincoln in the third round, when they take to Anfield tonight.

Having already played Mikel Arteta’s side in the Premier League on Monday, Klopp’s lineup is much-changed for the League Cup, although the squad is still very strong.

Adrian starts in place of Alisson in goal, behind a back four of Neco Williams, Rhys Williams, Virgil van Dijk and James Milner.

In midfield, Marko Grujic and Curtis Jones look set to start as a double pivot.

And Diogo Jota makes his first start in attack, alongside Harry Wilson, Takumi Minamino and Salah in an expected 4-2-3-1 formation.

Tonight will be only Wilson’s second game for the first team, coming almost four years after his debut in the 1-0 FA Cup third-round replay win over Plymouth Argyle in January 2017.

Among the substitutes are Fabinho, Gini Wijnaldum and Andy Robertson, with the depth of Klopp’s squad despite a number of injuries giving Liverpool a strong chance of progressing to the quarter-finals.

The Reds played Arsenal in the fourth round this time last year, with a wild 5-5 draw played out at Anfield before Jones scored the decisive spot-kick to send his side through.

Mikel Arteta has made eight changes to his XI from Monday night, with Bernd Leno, Rob Holding and Granit Xhaka the only players to start both as the likes of Dani Ceballos, Nicolas Pepe and Eddie Nketiah come in. 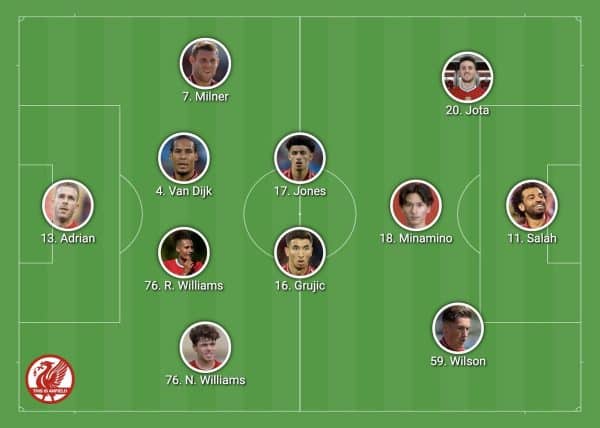