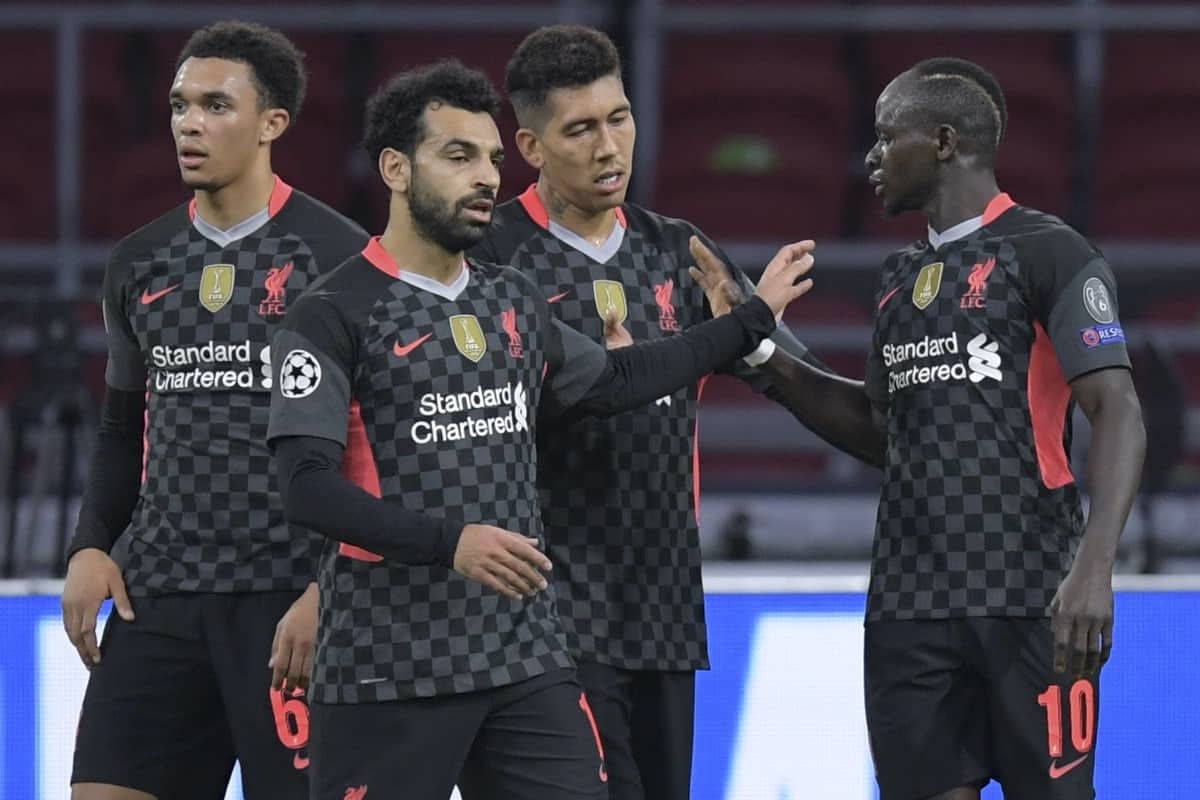 It was Liverpool’s first game without their defensive talisman but they managed to keep a clean sheet and claim an important victory, winning 1-0 away to Ajax.

The big question before the game was: how will Liverpool cope without their leader in defence, the world’s best centre-back, Virgil van Dijk? A player who played 4,590 minutes for the club last season alone.

There was some disarray at the back in the early stages as Ajax found ways through some defensive indecisiveness, some involving goalkeeper Adrian, but also due to a lack of protection from midfield.

This, though, is no different to how the side have looked at times already this season with Van Dijk.

It’s difficult to judge the difference, then, seeing as they haven’t exactly been defensively sound with the Dutchman in the side at the start of the 2020/21 campaign.

If looking for a positive from such a bad situation, it could be that it sharpens the focus of the club’s other defensive players.

They know they will need to step up, and not having the strength and speed of Van Dijk to bail them out could make them more focused and more concentrated.

The issues seem more with the trust of the goalkeeper than the defenders themselves, but again, looking for positives, that is something that could increase over time. 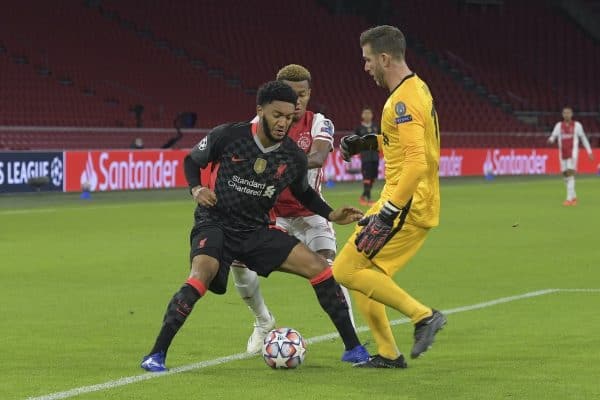 Adrian tackling his own teammate rather than collecting the ball as it ran into the area, and his late failed attempt to punch the ball clear, doesn’t inspire confidence.

But moments like an important save from Quincy Promes, a vital fingertip on a Davy Klaasen shot and a confident take in traffic between Promes and Fabinho will.

At the end of the day, the defensive pairing of Fabinho and Joe Gomez looked fairly assured and, thanks to a couple of key saves from Adrian, kept a clean sheet against an attack which shouldn’t be underestimated.

Fabinho excels in defence but is missed in midfield

Fabinho was imperious in at the back, epitomised by a moment early in the first half when he tackled two players in quick succession in the penalty area before launching a dangerous counter-attack.

He was on hand later to hook the ball off the line after Dusan Tadic had lobbed Adrian, in what was a heroic goalline clearance, and one tackle on Daley Blind as the half-time whistle went demonstrated his aggressive but fair dominance.

But, as alluded to above, there was little protection in front of the back four. James Milner and Gini Wijnaldum were neither providing a defensive shield as Fabinho would, nor an outlet to keep possession as Thiago might.

Wijnaldum doesn’t seem to offer himself for a pass as much as the likes of Thiago, Fabinho or even Henderson, even though the Dutchman has great ability in tight spaces.

Liverpool finished the game having had only narrowly edged the possession with 51.4 percent.

Fabinho looks a great addition in defence and, on this display, you’d think even Brazil boss Tite would consider him in the role at international level in the future.

But Liverpool could do with a Fabinho replica to play in front of Fabinho. A fit Joel Matip might suffice.

Klopp was resolute after the game, admitting his side were not playing to their full potential, but was pleased with the application and the fight shown.

“We were good enough to win the game and that’s what we need. Both teams can play better football, it was pretty wild in moments,” he told BT Sport.

“I’m really fine with the game, it was not our sunshine world-class football day, but we needed a result and we got it.

“It was not perfect but they fought like crazy and that’s what you need.”

The manager was also pleased with the fresh legs introduced at half-time, singling out Takumi Minamino for praise.

“Taki is a machine, he’s everywhere,” Klopp continued, “he defends like a devil and offensively he’s really involved nice one-twos with Diogo.”

It was a bold move withdrawing the entire front three on the hour mark with such a slim lead, but given the congested fixture list and the hunger of Minamino and Diogo Jota in particular, it is a decision Klopp can now afford to make at times.

Many signings under Klopp had previously played against Liverpool at some point, and Ajax are one of the biggest producers of top talent in Europe in recent years, via their academy and from youngsters they have brought in and developed before selling on for profit.

Liverpool have often dipped their toes in Red Bull, going to their conglomerate of clubs to sign players such as Minamino and Naby Keita, but they may now consider casting their eyes across the north sea to Amsterdam given the number of quality young players coming up.

Unfortunately, the club and fans weren’t able to get a proper look at two of the most promising talents on the Ajax squad.

Twenty-year-old Brazilian forward Antony, a potentially Salah-esque winger, missed the game through injury, while Ghanaian star Mohammed Kudus was taken off with a knock early on.

But 18-year-old midfielder Ryan Gravenberch is a big presence in midfield and is already wearing the No. 8 shirt at the club despite his young age.

He played a big part in the sequence of play that led to Klaasen hitting the post early in the second half.

Perr Schuurs was heavily involved at the back for Ajax – an area in which Liverpool might be looking for reinforcements in January – and though the youngster wasn’t perfect, few defenders are these days and he is definitely performing at a level beyond his 20 years.

The last player Liverpool signed from Ajax was Luis Suarez. He turned out OK.

Liverpool have a quick turnaround this week, only having a two-day break before their next matchday on Saturday when they face Sheffield United.

It’s another 8pm kickoff, which might help their routine, but they will still be hoping to have some rest as well as working on preparations to face Chris Wilder’s side.

To facilitate this, Klopp made a number of substitutions, making full use of the five changes permitted in Champions League games.

Henderson replaced Curtis Jones at half-time, while, in what appeared to be a pre-planned change, the entire front three were swapped on the hour mark with Minamino, Jota and Xherdan Shaqiri replacing Roberto Firmino, Sadio Mane and Mohamed Salah.

It didn’t make much difference to the performance either way, which could be seen as a good thing as all are in tune with the system, even though there was a lack of cutting edge in attack.