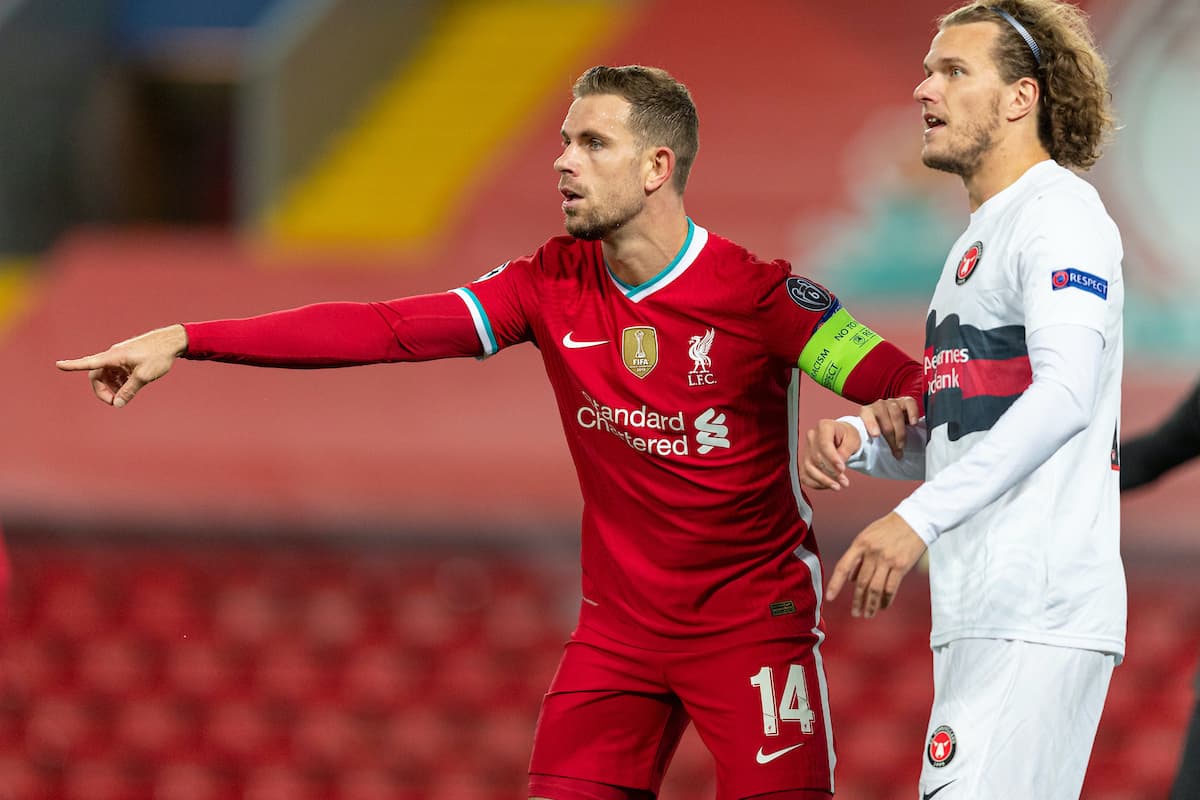 Liverpool’s second Champions League group game ended in a narrow win and another clean sheet with a 2-0 win over Midtjylland.

Half an hour in, the Reds had to make a change.

Short of Alisson having a recurrence of his shoulder issue, the one position Liverpool didn’t want any further problems was at centre-back – but Fabinho walked off, leaving us with one senior option standing.

Rhys Williams came on and did reasonably well, cutting out a couple of balls and keeping his passing simple.

But with Van Dijk now an irrelevance all season, the onus is really on Joel Matip to step up and do everything possible to get, and keep, himself fit.

Nat Phillips is likely to see game time now too, though he’s only part of the league squad, not the European one.

As for Joe Gomez – it’s cotton wool time in between matches.

It’s not really right to say that Liverpool’s second-string forwards missed chances in the first half, since we didn’t create any.

But they might have been feeling they had missed their chance, as in their opportunity, to shine.

Divock Origi looked like what he was: a forward who has no rhythm, no form, no game time of late.

Taki Minamino worked hard and won the ball back plenty, but didn’t have much to work with, no movement around him to link up in.

Xherdan Shaqiri wasn’t even in the attack, playing as an out-of-sorts third midfielder again and looking largely lost.

And then there was Diogo Jota, largely seen as the fourth forward right now. 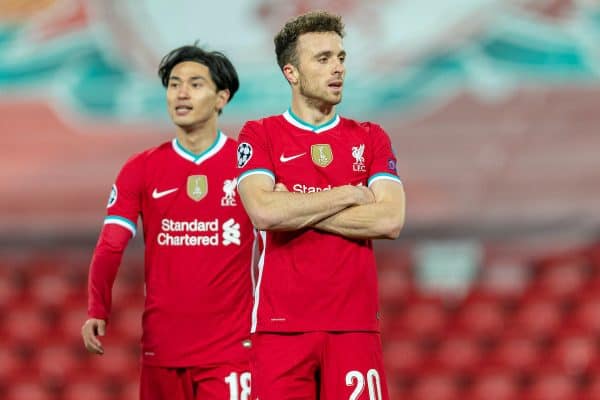 He was poor, or at least anonymous, out on the right wing in the first half – then after the break swapped to the left and was immediately better.

One dribble caused danger, then his next run resulted in a tap-in for the Reds’ 10,000th goal of the club’s history.

He and Minamino were the better performers, and Jota hitting the goal trail early is very useful indeed.

Ajax and Midtjylland have been two performances which will not live long in the memory.

Put it down to the lack of atmosphere, the rotation, the injuries or the fact opponents want to hack down those wearing a red shirt and just stop us playing by whatever cost.

But they have also resulted in six Champions League points, which put us at least halfway to the knockout stages, while also going mightily close to winning the derby away from home and taking all three points in our last league game.

The magic, the speed, the razzmatazz and the unstoppable brilliance of the Reds at their best will return.

But in the meantime, don’t forget that winning games in this way too is no bad thing.

Central midfield is a bit of a conundrum right now, by way of a knock-on effect from other areas of the pitch.

Defence has nobody, attack has lots of bodies. As a result, a switch to play 4-2-3-1 (or to incorporate four forwards, one in an unusual role in a different system) is an obvious option.

In theory, too, a double-pivot midfield might better protect the defence, with inexperience and new partnerships trying to focus on their own game in that line.

But the Reds are so used to playing in a three, with a deepest single option and the two eights having their own specific job off the ball, that it will be very difficult to get the balance spot on given the lack of training time right now.

This time, it was notable that we neither had the ball-playing ability in the middle of the park, nor the movement ahead of them to make good passes worthwhile.

But then there was also a lack of pressing, a lack of intensity, in-your-face approach from those in the middle – Milner fouls aside – to really dominate and exert our own authority on the flow of the game. 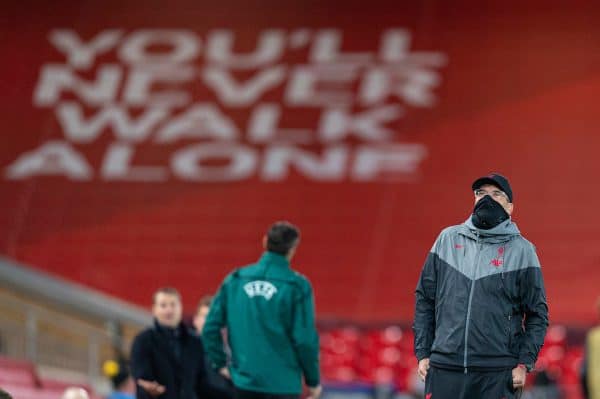 Front players rested; minutes in the legs for a few squad players; another win in the bank.

All in all, it’s a night of positives – assuming the Fabinho injury isn’t too costly.

But yet again there’s no time for lingering and wondering; yet again we’re straight back into the action and West Ham lie in wait at the weekend.

Jurgen Klopp will have decisions to ponder: Phillips or Williams? Thiago or Naby to return? Henderson for 90? What shape, which forwards did enough to stay in tonight? Is David Moyes really in charge of a team which tries to attack?

Let’s hope the answer to the last question is yes – and whatever else happens, that the Reds can find their cutting edge on the counter to rack up another three points in the league.