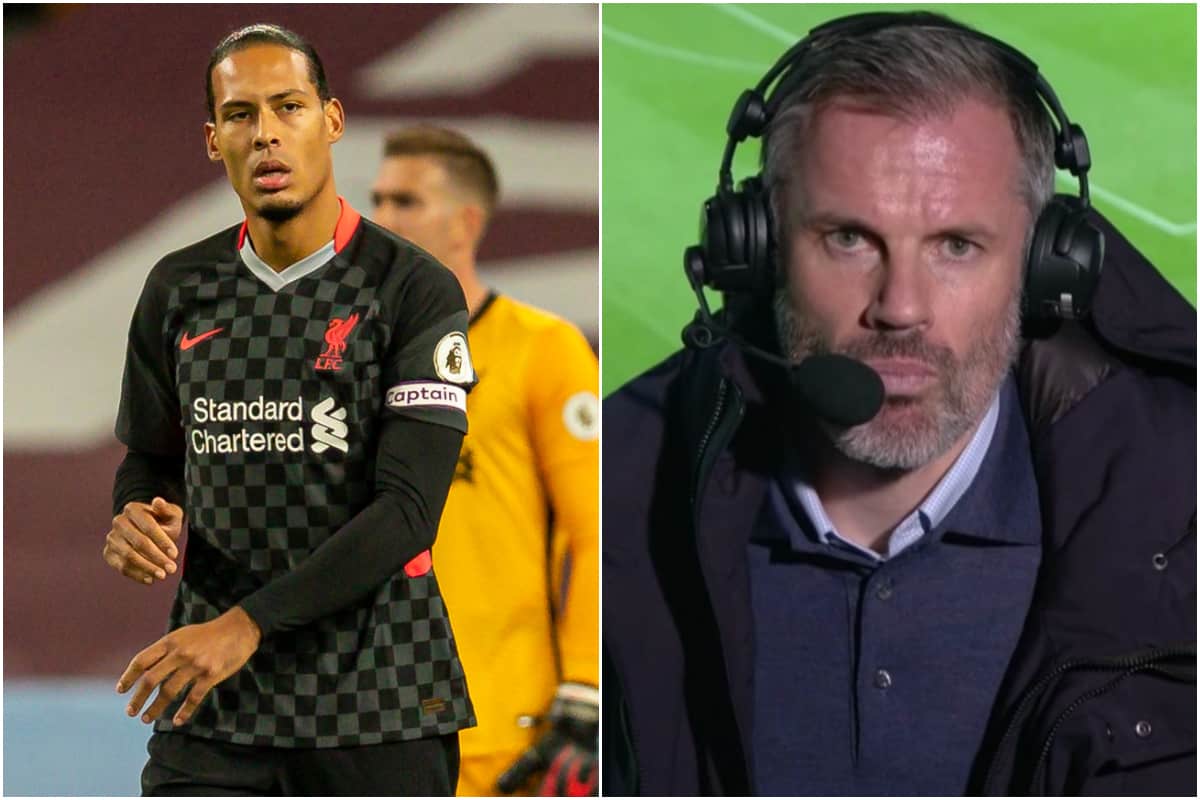 The Reds were embarrassed in their fourth game of the Premier League campaign, with Ollie Watkins scoring a hat-trick, Jack Grealish netting a brace and Ross Barkley and John McGinn also on the scoresheet.

Mohamed Salah struck twice, but it did little to take the disappointment off a huge loss for Jurgen Klopp‘s side, with the manner in which they were picked apart particularly worrying.

Beyond Adrian‘s frustrating night between the sticks, it was how often the likes of Grealish, Watkins and Barkley found themselves in behind Liverpool’s high line that proved a concern.

Watkins explained that it was an area Villa felt they could exploit ahead of the game, and speaking to Sky Sports, Carragher outlined the flaws in the visitors’ approach.

“They’re trying to catch people offside, I don’t like that; as a defender, I’ve been in that position myself,” he said.

“This team play a lot higher up the pitch, and almost sacrifice maybe one big chance a game with the opposition going through on goal, but they look at the benefits of that, of actually winning the ball because they play so high and press so high.

“But when someone beats your press around midfield, and they’re not far from your back four, you’ve got to get ready to go back.

“I just couldn’t believe Virgil van Dijk didn’t actually say ‘listen boys, the game’s gone, it’s 5-2, let’s all just step back and just not let this get any worse’.

“It did get worse, and they were fortunate it wasn’t eight or nine really.”

Much of this feels similar to the early weeks of last season, when Liverpool employed a noticeably higher line and were caught out on a number of occasions.

With the Premier League title as proof, they soon settled and turned that around, and the high line has been one of the Reds’ strengths over the past year-and-a-half.

But the area Carragher “doesn’t feel comfortable” with is the way in which the likes of Joe Gomez and Virgil van Dijk “try to play offside,” and when caught are often not in a position to recover.

“It’s nothing to do with a high line,” he continued.

“If you press from the front, your team has to be on the halfway line.

“You can’t have your team stretched, the most important thing as a defender is being compact, whether you play deep or you high.

“The top teams now play high, which is fine. OK, there’s nothing wrong with being up at the halfway line and really squeezing the play.

“But when that press is not there, or your opposition beat the press – and I’m talking when a team are maybe 15 or 20 yards away from Liverpool’s back four, not the front three pressing – [you have a problem].

“I have no problem with the line Liverpool have, and people say it’s a high line, my problem is when they’re in that position, they stand and wait, and try to play offside.

“I hate teams that try to play offside, I hated it when I was a defender myself. I think in that position, you’ve got to be ready: ‘OK, this is my high line, you’re ready to kick and as soon as you kick, I’m running back’.

“That’s the problem for me with, not so much the Liverpool defenders, this comes from the manager no doubt – and what can you say for being so successful?

“I just think within those positions, when someone’s ready to hit the ball, you’ve got to be ready to run back.

“They’re not ready to run back, they just hold a line and wait for the linesman’s flag.

“More often than not, they get it, OK, credit to them. I just don’t feel comfortable as a defender, or maybe a Liverpool fan, watching it where I think ‘someone’s going to go through on goal’.”