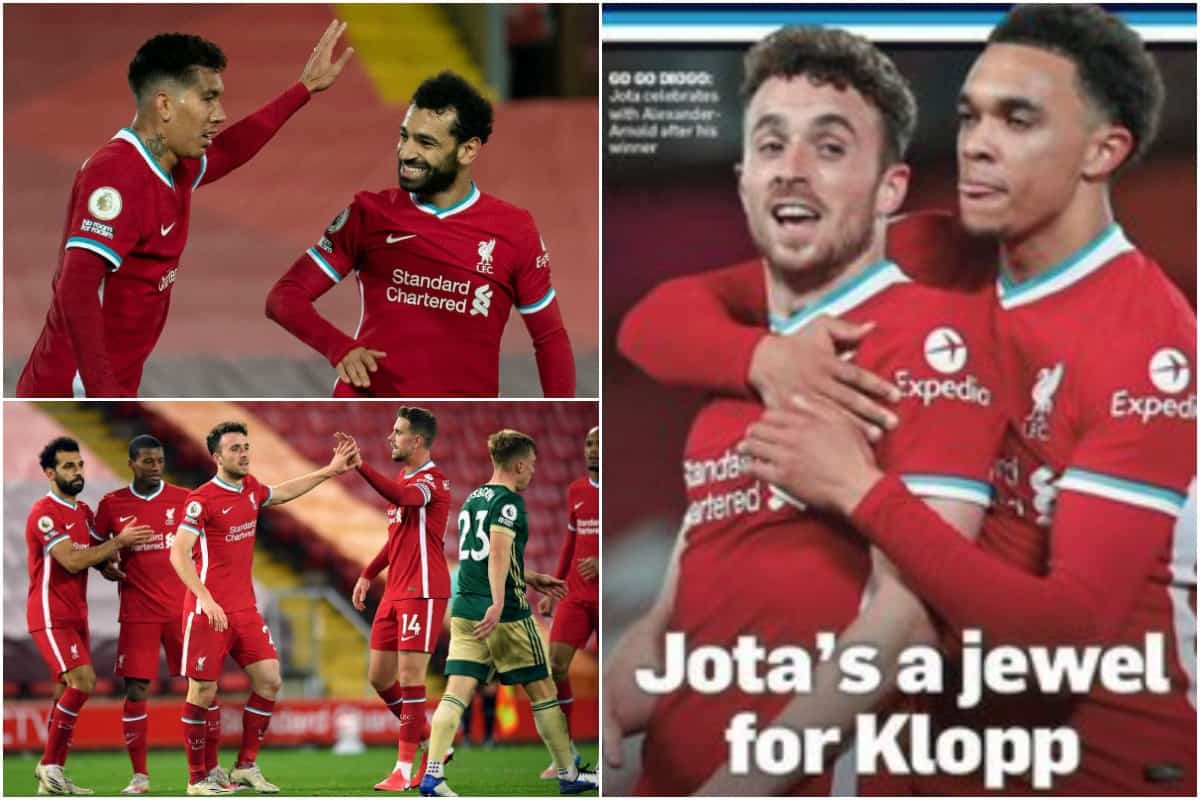 The media praised Liverpool’s “faultless” focus in overcoming another VAR mess to beat Sheffield United 2-1, but were not convinced by Jurgen Klopp’s 4-2-3-1 setup.

Winning was vital on a day title rivals Manchester City dropped points, and Klopp will be pleased with the resolve his team showed to fight off another VAR farce for a crucial victory.

Here’s all the key analysis from the media on the hard-fought win.

The Telegraph’s Chris Bascombe was first to assess that this was a battling victory that will prove to be an important result as the season unfolds:

Liverpool never looked as secure as they would have been with you-know-who, but it already felt like one of those wins that might carry extra weight as the season progresses.

The Guardian’s Andy Hunter lauded Liverpool’s “faultless” focus and resilience to both overcome VAR and grind out victory despite not hitting top form:

Klopp will be seeking improvement in his team’s performance, this was more hard-fought and dogged than slick and stylish, but their focus and resilience was faultless yet again.

Jota’s winner, coming two minutes after Salah’s disallowed volley, was the hallmark of a single-minded side.

On VAR, Bascombe was particularly critical as he described how the Premier League have made “an inflammatory mess” of implementing the technology:

When fans are finally allowed back into football stadiums, the Premier League might as well advertise ‘video assistant controversy’ on the match ticket.

What an inflammatory mess they have created, every game played amid the ceaseless fear we cannot be sure what we are seeing. Now our emotions need a delay function.

Interestingly, the Mirror’s Mark Jones felt that, even though VAR was wrong to award the penalty, Fabinho should not have attempted such a challenge in the first place:

Penalty? Free-kick? Even with endless replays you couldn’t really tell, which made the VAR’s decision to turn Mike Dean’s original award of a free-kick into a penalty all the more curious.

The real truth is that Brazilian really shouldn’t have been making a challenge from behind like that in the first place though, something that will serve as a valuable lesson to him as he continues to learn his centre-back role.

Meanwhile, the Liverpool Echo’s Paul Gorst reflected on the start to the season and believes the Reds have “cause for optimism” having made a positive opening despite not hitting top form:

There’s no question that there’s still plenty to come from this Liverpool side. They are yet to get anywhere near top gear, so the fact they now sit as joint leaders is cause for optimism as life after Van Dijk begins in the Premier League.

Jones wrote how the Portuguese is showing to be “a great piece of business” with the way he seamlessly slots into Liverpool’s attacking system:

Jota’s cameo appearance in Amsterdam in midweek was one of the major talking points among Reds fans after that win, and after being rewarded with a start here the Portuguese certainly took his opportunity.

As detailed above, versatility and a roaming quality are what is required in the Liverpool attack, the header from the former Wolves man showed that he’s got that in abundance. His signing continues to look a great piece of business.

The Liverpool Echo’s Ian Doyle explained how this was the exact kind of game Jota was signed for, and applauded the No.20 for getting to grips with his role so quickly at Anfield:

It’s partly for such reason Jota was brought in, his versatility across the front three allowing the Reds to introduce the tactical unpredictability they readily admit will be required as they attempt to find new ways to deal with the age old problem of picking through packed defences.

His work-rate, bustling down the flank and providing defensive cover for Trent Alexander-Arnold, no doubt endeared him to his new team-mates. […] And in Jota, they may well have found another match-winner. You can never have too many.

Meanwhile, ESPN’s Tom Fenton thought another player shone on the night with an “excellent” performance – that being Jordan Henderson:

Despite the tricky start, captain Jordan Henderson was excellent throughout. His pass in the lead up to Firmino’s equaliser was wonderfully inventive, while in a defensively capacity, he was customarily hard-working.

Carl Markham, writing for the Lancashire Telegraph, saw concerns with how many opportunities Sheffield United were able to create:

It was one of their most hard-fought of 51 victories in that sequence with United not only working hard to hold their early advantage but creating enough opportunities to concern Jurgen Klopp’s side, who had the added security of Alisson Becker back in goal ahead of schedule following a shoulder injury.

The home side never looked comfortable defensively. Without the presence of Virgil van Dijk in the backline, Liverpool struggled when put under periods of sustained pressure.

It has to be said that the defence weren’t exactly helped by the attack and midfield, with players like Georginio Wijnaldum drifting out of the game at times.

The BBC’s Harry Poole praised Liverpool’s attackers for bailing out the ‘uncertain’ defence:

Despite the return of Alisson, out since September with injury, there were moments of uncertainty at the back as Liverpool allowed United 13 shots at goal, but their own quality in attack ultimately told.

Gorst was not impressed, noting how the formation switch blunted and “confused” Liverpool’s attacking play:

The 4-2-3-1 formation Klopp had set out was struggling to find its rhythm, though. If the plan was to bamboozle the Blades with some fluid movement and frequent interchanging of positions between the front four, they only succeeded in appearing to confuse themselves.

Not one of Mohamed Salah, Diogo Jota, Sadio Mane or Roberto Firmino appeared to know where to station themselves in the first period before the champions eventually managed to force their way back into proceedings.

Bascombe thought the Reds were “unbalanced” by the system change and doesn’t think it is something Klopp will stick with going forward:

Not since Philippe Coutinho roamed behind Mo Salah, Roberto Firmino and Sadio Mane have Liverpool looked so bold. Nor have they seemed so imbalanced.

If this was Klopp’s first major concession in the wake of Virgil Van Dijk’s injury, facilitating another attacker to outscore whoever his side meets, it will probably be a short-term measure.

However, Fenton saw potential in the formation and believes it is something Klopp should persist with as it allowed Jota into the team to provide another attacking threat:

Despite the early setback, there is certainly potential in the new system; as Jota netted, while the likes of Salah and Firmino were unlucky to have not added more goals. Considering this was the first time the German manager has selected this XI, it wasn’t a bad first attempt by any means.