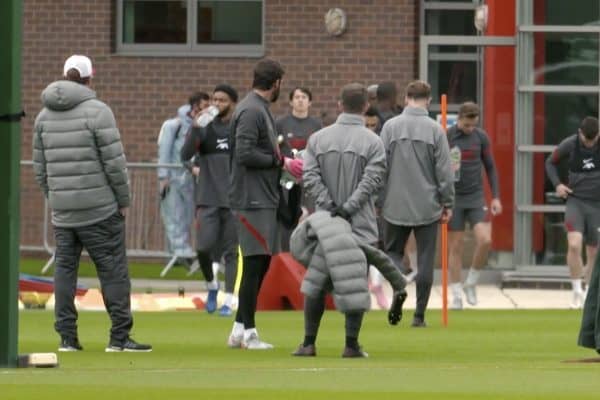 Liverpool have completed the signing of Brazilian goalkeeper Marcelo Pitaluga from Fluminense, with the 17-year-old joining first-team training at Melwood on Friday.

The Reds are not likely to make any further additions to their senior squad before the transfer deadline on Monday evening, but preparations for the trip to Aston Villa saw one quietly unveiled.

A move for Pitaluga, who trained with Alisson at Fluminense’s training ground during the winter break and was team-mates with the No. 1’s brother, Muriel, has been in the works since August.

Liverpool are believed to have agreed a deal worth up to £1.8 million, with the club paying an initial £700,000, while Fluminense will hold a 25 percent sell-on clause should he leave Anfield, where he has signed a three-year deal.

Pitaluga had not made his senior debut at Fluminense, but was already training on a regular basis with the first team and is widely considered one of the most talented goalkeepers in Brazil.

He is expected to begin life at Liverpool with Barry Lewtas‘ under-23s, but will work alongside Alisson at Melwood whenever numbers allow, and that should be often.

Jurgen Klopp has no plans to add another senior goalkeeper to his ranks, and with Loris Karius and Kamil Grabara both leaving on loan at the end of September the role of fourth choice remains open.

According to reports in Brazil, the package agreed with Pitaluga on his switch from Brazil – which was eased by his German heritage, like Alisson – can be extended by a further two years.

It was a low-profile first session for Pitaluga in front of the cameras at Melwood, with the teenager largely working with assistant fitness coach Jordan Fairclough as Alisson and Caiomhin Kelleher stood in goal for five-a-side games.

But John Achterberg will be relishing the opportunity to involve him in exercises, having first spotted Pitaluga during the Under-17 World Cup in 2019.

Friday also saw the return of Jordan Henderson to training, but a number of players were absent including Thiago and Sadio Mane, who are both self-isolating after testing positive for COVID-19.

Kostas Tsimikas, Joel Matip and Alex Oxlade-Chamberlain are still sidelined due to injury, while Xherdan Shaqiri was not involved as he nears a move away before the deadline.

Bar substitutes Joe Gomez, Gini Wijnaldum and Diogo Jota, those involved in Thursday night’s League Cup defeat to Arsenal took in recovery work, with Virgil van Dijk and Mohamed Salah among those pictured in trainers rather than boots.