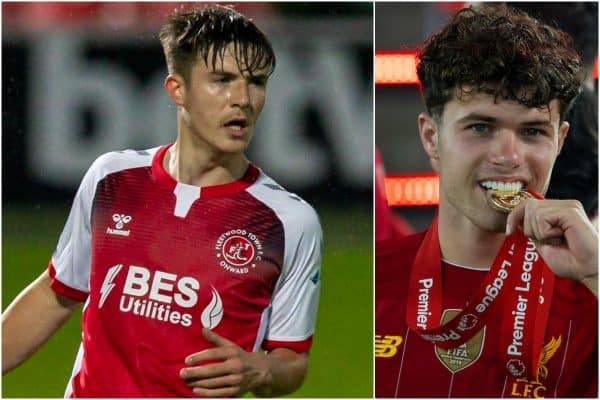 Young defender Morgan Boyes hopes to follow in the footsteps trailblazed by national compatriot Neco Williams, with his loan spell at Fleetwood Town providing the chance to take the next step.

Boyes has been with Liverpool since under-11 level, a mainstay at the academy who was rewarded with a new contract in January before sealing a season-long loan switch to League One’s Fleetwood Town in August.

After missing the first six games of the season in part due to involvement with Wales’ U19s in September, Boyes has since played the full 90 minutes in Fleetwood’s last three games at centre-back.

The 19-year-old is plying his trade under the tutelage of Joey Barton and with 15 years of playing experience behind him and two years in charge at Fleetwood, Boyes is eager to take as much as he can from the experience.

“He has years of experience so any little bit of information you can take from him is a bonus,” Boyes says,” Boyes told BBC Sport.

“I am just trying to make the best out of the loan for me and also for the club.”

But it is fellow teenage defender Neco Williams who is proving a consistent inspiration for Boyes after a rapid rise up the ranks has seen him establish himself as deputy to Trent Alexander-Arnold and become a member of Wales’ senior side.

The pair have been academy teammates for over eight years, won the FA Youth Cup together in 2019 and represented their country at youth level.

After watching on as Williams has made 14 senior appearances for Liverpool and picked up a Premier League winners’ medal, Boyes has the perfect example that earning a place in Jurgen Klopp‘s side is possible.

And the quality of the company he has kept during training sessions at Melwood has not been lost, but it provided a first-hand experience of what it takes to make it.

“I have played with him for years, with Wales and with Liverpool,” Boyes explained. “Seeing what he has done is brilliant for him – he is where I want to be eventually.

“It’s brilliant to see that someone who has done the exact same things as me throughout the years has gone and got the opportunities. It just shows that it can be done.

“The class is completely different,” Boyes said of training with Klopp’s first team. “You do get that quick shock of [playing with] the best players in the world.”

For now, Boyes, who has two Liverpool appearances to his name from 2019/20, will embrace life in League One, where experience in a first environment will prove invaluable for his development.