Thursday marks the 10th anniversary of the American owners completing their £300million purchase of the Reds after the dysfunctional management of predecessors Tom Hicks and George Gillett left the club on the brink of administration.

As the sale descended into a bitter courtroom battle, Hicks and Gillett, who were opposed to selling to FSG (then New England Sports Ventures) as it would mean they were left without a pay-off, sued Ayre – then commercial director – chairman Sir Martin Broughton and chief executive at the time Christian Purslow for 1 billion dollars apiece.

And, despite concerted attempts to fire Ayre and Purslow in order to re-establish a majority vote on the board, a deal – famously described as “an epic swindle” by the departing owners – went through on October 15, 2010, and was celebrated wildly by fans who attended London’s High Court.

Fast-forward a decade and a club which the banks were threatening to foreclose due to an outstanding £270million loan is now worth an estimated £2billion, having won the Champions League and Premier League in back-to-back seasons and assembled a squad among the best in the world.

For Ayre, it made those days and nights of stress and difficult decisions standing up to owners who had run a once-proud club into the ground worth it.

“The banks, RBS in particular and others, were ready to call default on the loans that the owners had,” Ayre, now chief executive at new MLS side Nashville SC, told the PA news agency.

“Eventually the banks came into myself and the two other independent directors Christian and Martin and made it clear if we didn’t work with them to find a buyer then they would foreclose and that would have meant administration.

“How serious that threat was it is hard to know but they certainly had the power to do that and it made it difficult for everyone involved.

“We all had a pretty difficult time personally – we were all sued individually for a billion dollars by the owners. It was harrowing and difficult but we all at least felt we were doing the right thing. 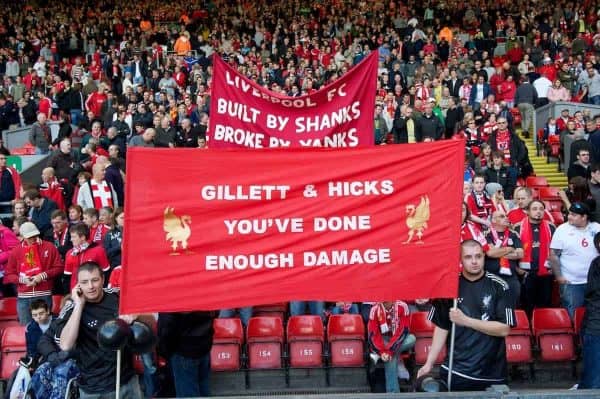 “In their own right they were successful businessmen but this was a crown jewel of a football club which is so important to the city and people around the world.

“Once you start messing with that and start causing issues that could damage you, you get in really hot water.

“It wasn’t all bad but it was certainly very ugly at the end and they were fighting for the money they would lose so it was always going to be a bit of a scrap. Let’s say the best team won.”

Hicks and Gillett had long-since incurred the wrath of supporters, who mobilised in their hundreds to protest against the pair’s ownership, picket their American offices and generally make enough noise to bring the plight of the club to a wide audience.

With that as background noise Broughton, Purslow and Ayre were faced with the prospect of finding new owners who could restore broken trust and, just as importantly, former glories.

“It was crucial. We were all probably more aware than anyone else just how important the selection of the new buyer was in terms of all of the things which had just gone before,” added Ayre.

“There were some very good organisations like Fenway and some not so pretty organisations on the face of it so it became really important we asked all the right questions of the intent of those people.

“It was one thing to find a buyer who would take on the debt of the club but it is also important to have people who understood it. That was a fraught situation.

“(FSG) are good people who know their stuff and are seasoned sports owners and had a great track record not just in sports and for me they seemed to be an ideal owner for Liverpool.

“Even that was a long, tough journey for them but they have shown in the best way possible the plan they had at the start and the time it has taken them to get there it was the right way at the right club.

“I’ve supported that club my whole life so to see it finally come together and see it being as successful it is at the moment is great testament to those guys and how they managed it through the plan.”