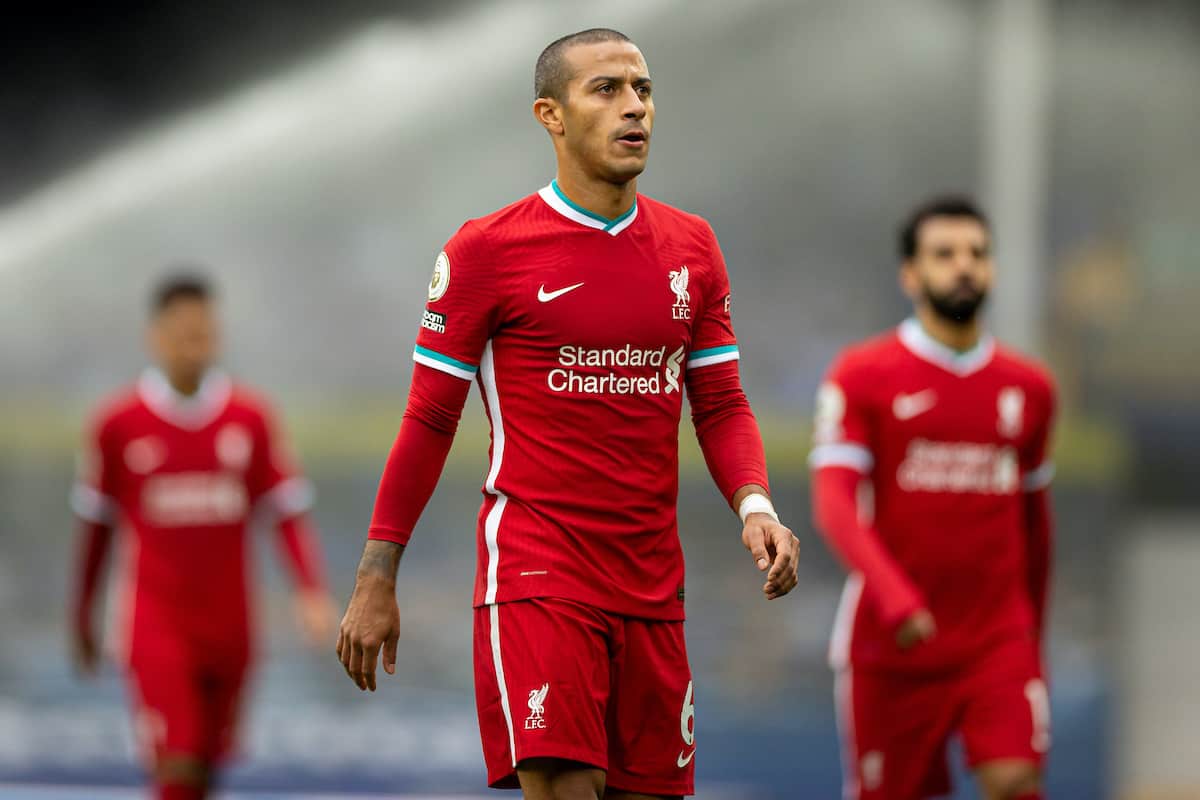 Liverpool were forced to settle for a draw in a wild Merseyside derby where red cards and refereeing decisions dominated the discussion.

Jurgen Klopp’s men were out to get back to winning ways and extend their decade long misery over Everton, but they would be forced to settle for a draw in a topsy-turvy game.

And after three successive goalless draws at Goodison Park, the run was swiftly ended within just three minutes as Sadio Mane rifled his shot into the roof of the net – reward for Liverpool’s energetic start.

Things took a serious turn less than ten minutes later, however, as Virgil van Dijk was subject to a nasty off the ball challenge which forced his withdrawal with a knee injury where, incredibly, no action was taken on Jordan Pickford.

While the Reds were the superior side and had an abundance of chances come their way, it was Everton who found the net next from a corner to see the scores level at the break.

It wasn’t as slick and neat for much of the second, with Everton the ones asking the majority of questions but Mohamed Salah had something to say about that with a stunning first-time finish.

The defence would undo all the hard work with Dominic Calvert-Lewin able to capitalise, and just when victory looked assured through Jordan Henderson, the goal was ruled offside.

If that’s footie you can keep it. Just headlines. No one can say he’s off. That’s a joke. I’m out. #LFC

Microcosm of everything wrong with football.

Whoever is doing the VAR today is really annoyed at Project Big Picture.

That's the first time I've honestly considered match-fixing coming into play with VAR. It is NOT offside.

“Disgrace of a decision!”

I actually think that decision — paired with Pickford — was so deliriously bad, so laughable, that it actually replaced any fume at the result with pure disbelief. I’m more embarrassed than I am mad

Rightly, there was also outrage directed at Pickford & the refs for the callous challenge on Van Dijk…

Mad how you can maim someone if they're offside.

That's a RED card regardless of the offside flag to not!

It's crazy that an offside call got Pickford off the hook there. The officials should have been able to judge a challenge like that in isolation – and send him off.

If you ever want to throw a potentially leg-breaking tackle on someone, do it when their armpit is offside and you’ll get away with it ?

Not sure how an offside enables you to challenge like that. Absolutely awful from Pickford. The clearest red card you’ll ever see.

Which followed on with Richarlison who laid another nasty challenge on Thiago, with this one correctly being shown a red…

That tackle is that bad it gives Rockford's a run for its money.

Richarlison receives a red card for an awful challenge after the whistle had sounded. Liverpool could have done with logic being applied in the first half.

That is a fucking disgrace. And that red car for Richarlison makes an absolute mockery of him not sending Pickford of considering he’d already blew for a foul on mane.

The first outing of this particular midfield unit impressed many, particularly Thiago…

Jordan Henderson has been superb. Passing and physicality both excellent.

Liverpool looking superb, midfield and attack so fluid. They should be 3 goals up, and probably would be if there was a competent referee.

And that’s exactly why this is our best midfield trio. Jordan Henderson yet again, shows his importance, he’s been outstanding so far.

Also absolutely absurd that Pickford hasn’t been punished in some way, offside or not. Horrendous challenge.

Thiago is so far clear of every midfielder on the pitch

The controversial (ridiculous) decisions shouldn't overshadow how just good Thiago was there. Such a special footballer. Henderson outstanding on his return too. #LFC

Thiago has this passing malarkey boxed, doesn’t he….

Thiago is different gravy. A throw back to the days of Xabi Alonso and repeatedly going "Wow" watching him on the ball.

The defence, on the other hand, came under scrutiny for the equaliser…

Too easy to get into crossing position against Trent there. Then doesn’t close down the cross. Poor defensively from LFC

What was Trent doing there? Complete no man’s land, Adrian glued to the line.

“Shouldn’t have allowed that cross. Shouldn’t have let the header in. Should have anticipated that header better. Just bad defending throughout that.”

Conceding far far too many goals. No title unless we sort it out quick.

The knock-on effect of subbing VVD off early — I don’t think Hendo was penciled to play 80+ minutes. He’s too gassed to get a toe to a pass in the buildup, then Trent reacts poorly in turn and it’s wide open going the other direction

Overall, there was a myriad of emotions for the result, performance and the state of the game as a whole…

You have to say that was two points dropped. Minimal offside decisions went against #LFC plus not sending off Pickford whilst Adrian, sad to say, is looking increasingly poor.

Liverpool fully deserved to win that game – they were excellent, by miles the better team. But they didn’t because VAR is a joke, broke or both. Simple as that.

How the fuck did we not win that game? Fucking dogs of war levels shit from Everton.
Richarlison needs a 10 game ban for that challenge. Pickford a retrospective red

The game is broken I'm afraid. No idea how 1. Pickford stayed on the pitch there and 2. Hendo didn't score just score a perfectly good goal. Terrible officiating

Don't think I've ever been so angry at decisions in a game since Kiev.

Liverpool much the better side bar 15 second half minutes.

What even is modern football. VAR and the state of refereeing is a joke in the supposedly best league in the world.

A really good Merseyside derby completely washed away by poor officiating & VAR. Number of times post match discussions become about the officiating than the actual football on show is an alarming reflection of the standard of refereeing in this country.