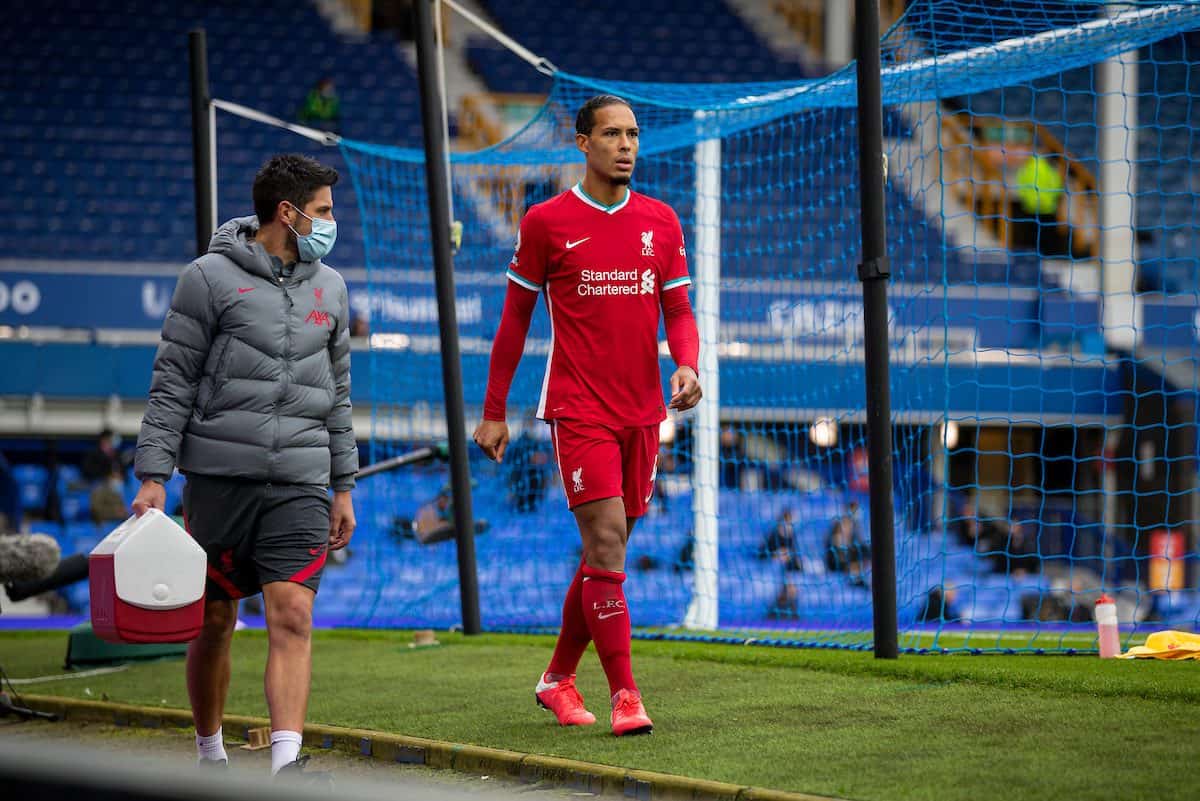 Liverpool have confirmed that Virgil van Dijk suffered an ACL injury in the Merseyside derby, leaving fans concerned over a season without their leading centre-back.

The Reds are set to be without Van Dijk for at least the majority of the campaign due to an ACL injury inflicted by Jordan Pickford’s brainless challenge at Goodison Park.

It is the first time Jurgen Klopp‘s side will be without the Dutchman for an extended period, and having not replaced Dejan Lovren over the summer, leaves Liverpool decidedly light at centre-back.

Van Dijk has, arguably, been the club’s best player since joining from Southampton in a £75 million deal in 2018, and now Klopp will be forced to plan without his No. 4 for the foreseeable future.

A crippling blow to the Reds as they defend the Premier League title, it will be a test of their mettle as the likes of Joel Matip, Joe Gomez and Fabinho fill in as primary options at the back.

The news of Van Dijk’s injury was announced on Sunday evening, and here’s how Liverpool supporters reacted on social media.

Unsurprisingly, the mood was low…

I knew the moment I saw it was likely to be his season over. A cowards tackle.

Absolutely distraught by the VVD news. Such a disgusting tackle and it's costing the player a season of his career, costing the team an invaluable team mate and costing us as fans because we love to watch him.

The Van Dijk news is crushing. Asks the question of this Liverpool defence that we've been blessed to avoid having to answer over the last two seasons.

Equally livid and devastated for Virg. A callous and unnecessary challenge results in a serious injury which can prove to be career changing/ending for many. A huge blow for Liverpool but by no means results in a write off.

It was always a risk for #LFC to head into the new season with only three senior centre-back options. Now they only have two. Absolutely gutting for both player and club that Van Dijk is out. A massive loss for the Premier League to lose the world's best defender too.

Some directed their fury at Pickford for causing the injury…

Impossible to downplay that news about Van Dijk – it's a monumental blow that could single-handedly alter the Premier League title race.

Jordan Pickford, you're a disgrace.

Jordan Pickford just became an Everton legend. Sad, but that's how the blue half lives.

International break in a few weeks, make sure you leave some studs in @TrentAA @JHenderson @J_Gomez97

… Jordan Pickford’s insistence on being a hothead has hurt his own team and now it’s literally hurt another player. No doubt another apology will follow but what he needs to do is grow up. He’s 26 but basically acts like a sugared-up toddler on the pitch. Just ridiculous.

While others looked to motivate Matip, Gomez & Co…

Devastating news for LFC regarding Van Dijk. Time for Matip and Gomez to step up. Like with any big club. The show must go on.

As far as Premier League centre-back duos go, Joe Gomez and Joel Matip is still very good, but the lack of depth there now is a big worry.

Sickening the way van Dijk picked up his injury. Liverpool will be raging. Can’t afford any more injury issues at centre-back. Big, big seasons for Matip, Gomez and Fabinho.

Bad times in disgraceful circumstances, but also part and parcel of football. You simply can’t just replace the best defender in the world, but others will have to step up in the same way the late Gary Ablett did when Alan Hansen missed most of 1988/89 #LFC #VirgilVanDijk https://t.co/TFLBRGsfVe