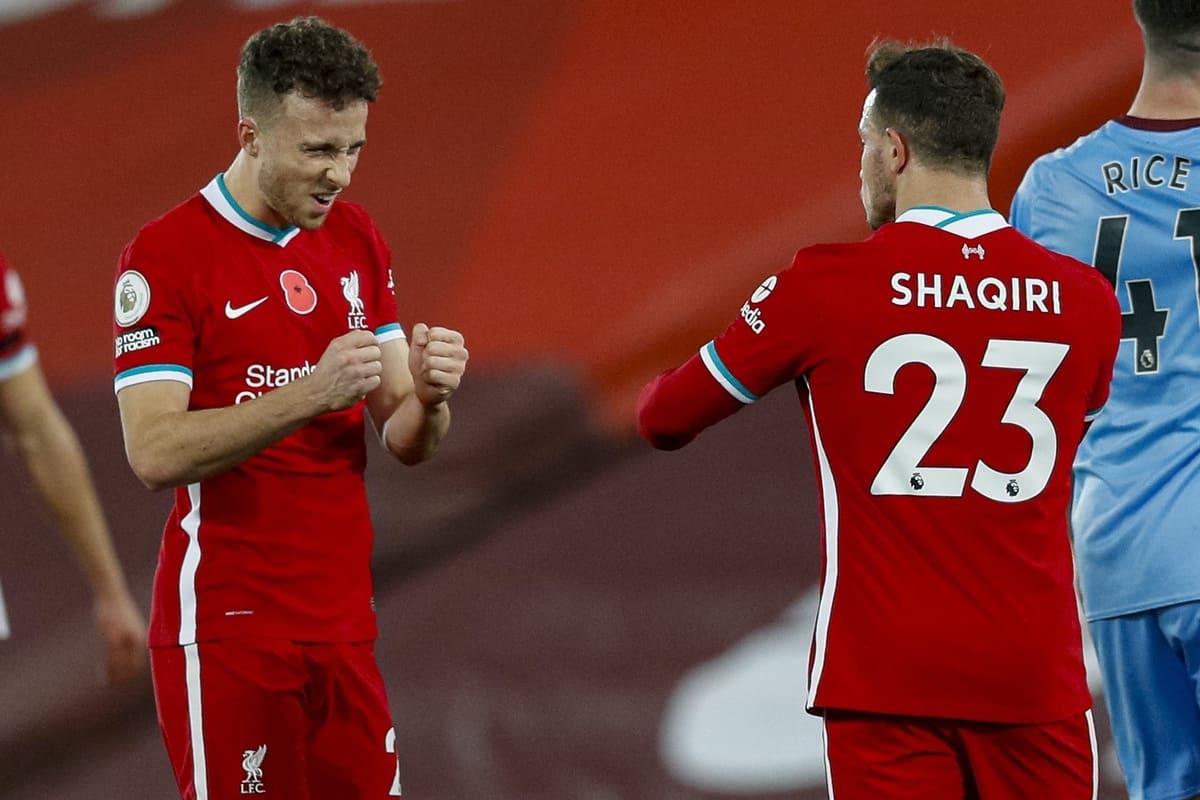 Liverpool were left to do it the hard way once more, but a Diogo Jota strike sealed all three points for the Reds in a 2-1 win over West Ham on Saturday night.

It was back to Anfield for Jurgen Klopp’s men just four days after their Champions League victory, with West Ham the visitors as the Reds looked to make it four wins on the bounce in all competitions.

A total of six changes were made from midweek as the front three returned and Nat Phillips was handed his maiden Premier League appearance amid a senior centre-back crisis.

And for the second league matchday running, Liverpool found themselves behind on the scoreboard in the early stages as Joe Gomez’s headed clearance found Pablo Fornals, who clipped his effort in off the inside of the upright.

Possession would find Liverpool easily but their efficiency on the ball left a lot to be desired, hardly testing the Hammers defence with moves breaking down on the cusp of the final third.

But with half-time approaching, Mohamed Salah would both earn and convert a penalty to level the scores and provide a timely boost heading into the break.

The second 45 followed a similar pattern to the first in terms of time in possession, but they could do little to test Lukasz Fabianski in West Ham‘s goal.

At the other end of the field, Phillips stood strong and put in a Man of the Match performance in his first senior outing since the FA Cup win over Everton last season.

The game-changers would arrive with 70 minutes on the clock, with Xherdan Shaqiri and Diogo Jota injected into the game – the latter of whom would find the net only for a VAR review to deny him for a foul in the build-up from Sadio Mane.

But he wouldn’t have to wait long to be the match-winner once more after latching onto a perfectly weighted defence-splitting ball from Shaqiri – his fourth goal for the Reds to date.

The win amid a series of injuries and non-stop games is another testament to the character of Klopp’s side and they have now equalled the 63-game league unbeaten run at Anfield set by Bob Paisley’s side between 1978 and 1981.