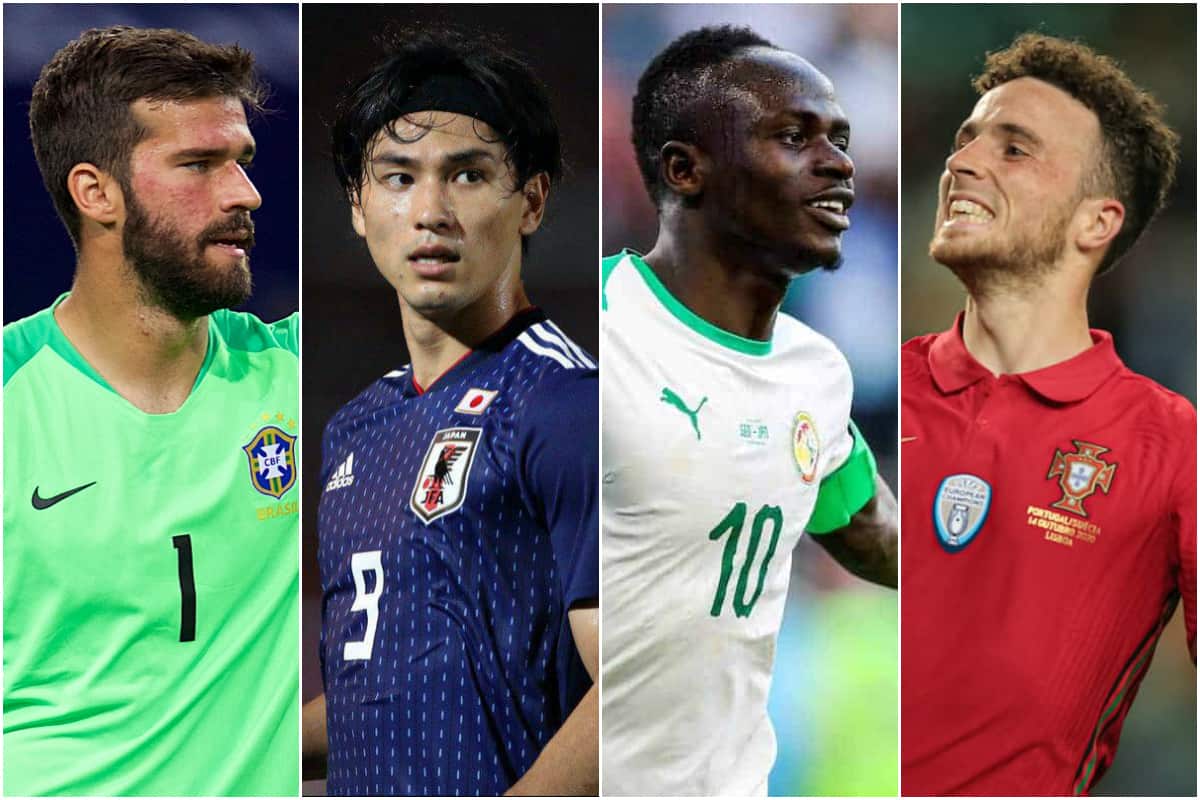 Liverpool will see 17 players from Jurgen Klopp‘s first-team squad depart for duty in the November international break, with many set to play three fixtures.

The final international break of the year is upon, and Klopp will be hoping for no more injuries or COVID-19 cases as the majority of his squad depart.

With Leicester to come on November 21, the manager already has Virgil van Dijk and Alex Oxlade-Chamberlain ruled out with long-term injuries, while Fabinho, Thiago and Trent Alexander-Arnold are also doubts.

Alexander-Arnold was due to link up with the England squad for their upcoming meetings with the Republic of Ireland, Belgium and Iceland, but was forced to pull out with a calf problem.

Joe Gomez and Jordan Henderson remain part of Gareth Southgate’s side, however, with Caoimhin Kelleher hoping to feature for Ireland.

Both Alisson and Roberto Firmino have travelled to Rio de Janeiro ahead of Brazil’s clashes with Venezuela and Uruguay, the latter which requires an away trip to Montevideo.

Mohamed Salah is also set for a long flight as part of the Egypt squad in Africa Cup of Nations qualifying action against Togo, playing home and away, while Sadio Mane will do the same for Senegal against Guinea-Bissau.

Naby Keita is first due in Chad and then Guinea for his AFCON qualifiers, with the midfielder’s involvement in Guinea’s friendlies during the October break a major source of concern after an alleged COVID-19 outbreak.

Fortunately, Takumi Minamino is not travelling so far despite his inclusion in the Japan squad to play friendlies against Panama and Mexico, with those both to be held in Austria.

Elsewhere in Europe, Gini Wijnaldum is scheduled for two UEFA Nations League games and a friendly with the Netherlands, and similar for Diogo Jota with Portugal, Kostas Tsimikas with Greece, Xherdan Shaqiri with Switzerland.

Andy Robertson‘s Scotland, meanwhile, take on Marko Grujic‘s Serbia in a qualifier that will decide who reaches Euro 2021 and who misses out – the left-back has described it as “the biggest [game] for my country for a long, long time.”

Lastly at senior level, both Neco Williams and Harry Wilson are in the Wales squad to play the United States, the Republic of Ireland and Finland, with manager Ryan Giggs absent for the squad announcement following his arrest after allegations of domestic abuse.

In England’s youth ranks, both Curtis Jones and Rhys Williams are in the under-21 squad to play Andorra and Albania, while Harvey Elliott and Layton Stewart will join the under-19s for a training camp, and the same for Jarell Quansah with the under-18s.

A notable omission for this break is Divock Origi, who is not part of the Belgium squad, with Adrian, James Milner, Joel Matip, Nat Phillips and, hopefully, the recovering Fabinho and Thiago to keep him company at Kirkby.

Liverpool players called up in November