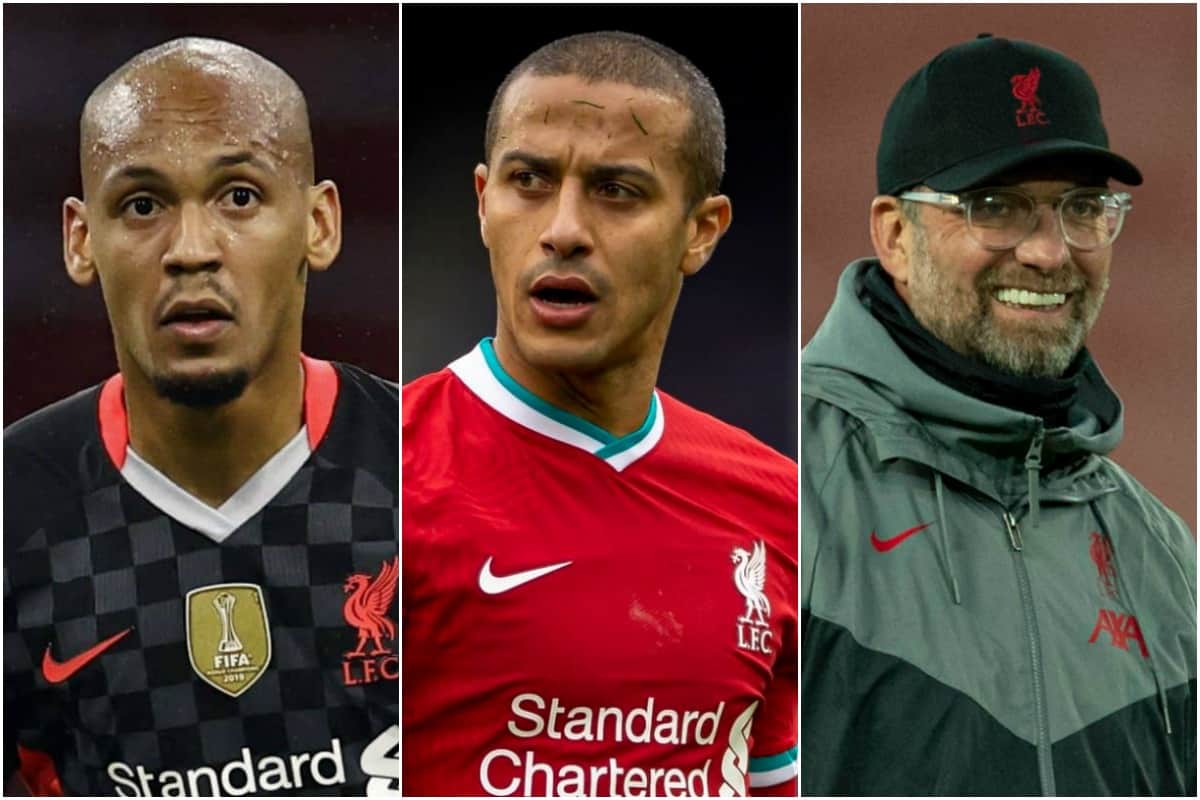 Liverpool may be suffering an injury crisis, but there are still lots of positives on the horizon after the final international break of 2020.

If feels like weeks ago that the Reds drew 1-1 away to Man City, prior to the season again being disrupted.

Jurgen Klopp‘s side are back in action on Sunday evening, hosting Premier League leaders Leicester and looking to record the longest unbeaten home league run in the club’s history (64 matches).

Liverpool will have to make do without a host of big names in the coming weeks, but it isn’t all doom and gloom at Anfield – far from it.

Here are five things we can look forward to after the internationals are done and dusted.

A so-called ‘best’ Liverpool XI features both Fabinho and Thiago, such are their reputations as world-class footballers.

The pair have been sorely missed in recent weeks, with Thiago shining with his ball-playing artistry before being taken out by Richarlison.

Fabinho, meanwhile, was excelling at centre-back in the absence of Virgil van Dijk, only to tweak his hamstring in the win over Midtjylland.

Thankfully, Liverpool’s influential duo are expected to be fit for Sunday’s visit of Leicester, immediately giving a more authoritative look to the team.

Fabinho may largely be viewed as a defender this season, especially with such depth in midfield, and his poise in the role is going to be crucial from now until May.

Thiago has only had 135 minutes in which to show off his class, but it was clear from his first few touches at Chelsea that Liverpool had signed a superstar.

The Spaniard staying fit will allow the Reds to be an even greater attacking force, as he dictates games in the middle of the park and hits passes that most can’t even see.

Having them back is huge.

Not only have Liverpool been decimated with injuries and been cruelly robbed by VAR numerous times this season, their start to the campaign has also been tough.

Klopp’s champions have already had to tackle trips to Chelsea, Everton and City, as well as hosting an Arsenal side who were rejuvenated at the time.

The fixtures are far more winnable in the lead-up to the New Year, however, acting as a perfect opportunity to rack-up points and not be too affected by injuries.

The Leicester game is a tricky one, as Brendan Rodgers looks to feed his own ego and end Liverpool’s Anfield unbeaten run, but the Reds should still prevail.

The same applies to trips to Brighton (November 28), Fulham (December 12), Crystal Palace (December 19) and Newcastle (December 28), while Liverpool would be expected to see off Wolves (December 5) and West Brom (Boxing Day) at home.

It is a run which included four teams currently in the bottom half of the table, three of whom sit no higher than 16th and currently have just two wins combined to their name.

The one game that stands out as tricky is the visit of Tottenham on December 16, with the north Londoners possessing a front-three of Gareth Bale, Son Heung-min and Harry Kane.

Even a not-at-full-strength Liverpool are still superior to Spurs, though. 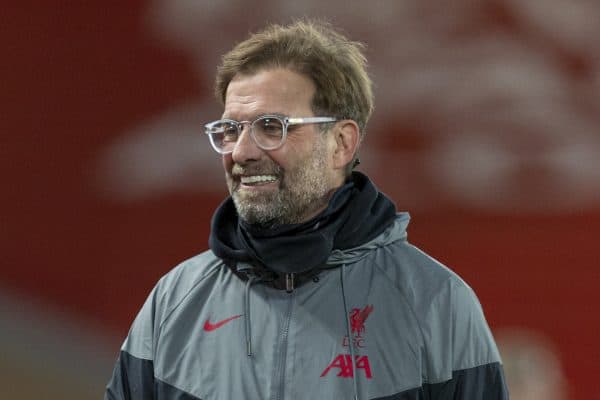 How do we forget that there are so many international breaks?

The new season rolls around every year, but those September, October and November breaks don’t get any easier to remember, or stomach.

The final internationals of 2020 are being played this week, before wall-to-wall domestic action comes supporters’ way.

The next break arrives in March, meaning Liverpool have fixtures every weekend, and nearly every midweek until then, should they remain in the FA Cup until deep into the competition.

It is going to be a huge test of the Reds’ resolve, but it will allow them to find a rhythm, rather than playing a few games and suddenly having the season halted again.

There will be times when a match every three days feels taxing, but during those periods just be thankful you’re not having to watch Eric Dier, Harry Winks and Declan Rice instead!

Klopp prides himself on blooding youth, allowing emerging talent to prove their worth in this superb Liverpool team.

With the injuries piling up and rest for key players more vital than ever this season, we could see several young players given starring roles.

Trent Alexander-Arnold is out for at least another fortnight with a calf issue, meaning Neco Williams could deputise at right-back.

James Milner is also an option there, but the young Welshman would be a more vibrant, bold choice in some of the easier fixtures coming up.

Champions League outings look most likely for the latter, with Phillips not registered in the European squad, considering Liverpool have afforded themselves breathing space in Group D with three wins from three.

Curtis Jones has started to look a mature option in the Reds’ midfield so there is no reason why he shouldn’t continue to blossom in the festive period, too.

These youngsters should see this period as a wonderful chance to be trusted long-term, rather than just temporarily filling in for bigger names.

At a time when Liverpool’s squad depth will be tested, some forgotten names can have a major impact.

Kostas Tsimikas is still waiting to make his Premier League debut, but his return to the fold is going to be so important, allowing Andy Robertson a much-needed rest.

Robertson has played every minute in the league so far this season and his current injury scare on Scotland duty is proof that he needs the occasional breather.

Alex Oxlade-Chamberlain is yet to play a single minute in 2020/21 having picked up a knee injury in pre-season, but his return has clear benefits.

The 27-year-old’s versatility means he can shine in central midfield and out wide, so he is an ideal squad player to have, adding both end product and work-rate.

Calling Naby Keita a forgotten man is unfair, but the Guinean has again been out of the team for a sustained period, stunting his growth once more.

During this hectic schedule, having Keita’s guile in possession and underrated off-the-ball work will be key, especially when opponents are proving tough to break down.