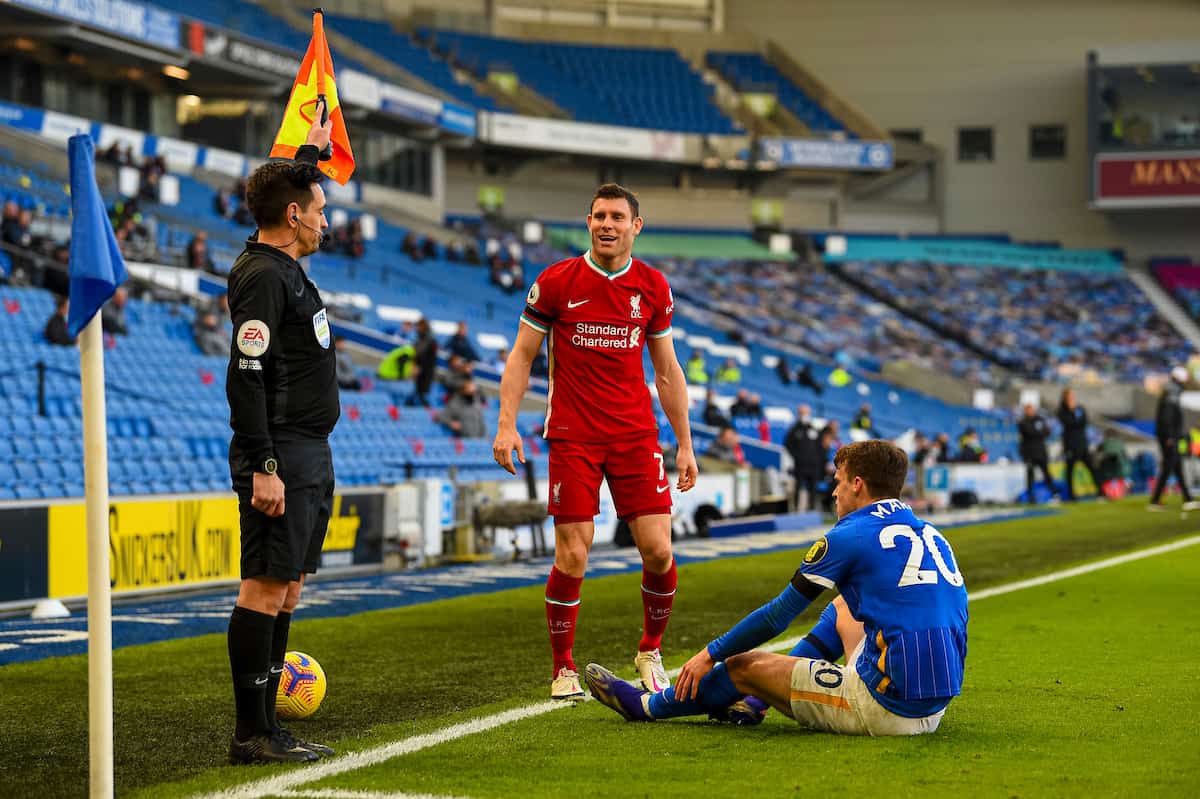 The events of the 1-1 draw at Brighton was a “bitter one to swallow” for the Reds as VAR came under fire from the game’s key stakeholders.

Liverpool were made to settle for a point on the south coast in what was an eventful affair with the Seagulls, where the referees and technology became the focal point instead of the performance.

Jurgen Klopp‘s side were far from their best and unsurprisingly so amid a long list of injuries and off the back of just a 63-hour break following on from their midweek exploits.

Yet, victory was well within their grasp with just minutes remaining after Diogo Jota scored his ninth goal for the club to punish the hosts for missing a first-half penalty.

Both Mohamed Salah and Sadio Mane saw goals disallowed for offside on a busy day for VAR which would end up having the last say as referee Stuart Atwell consulted the pitchside monitor after Andy Robertson‘s challenge on Danny Welbeck.

In real-time, the on-field referee gave the incident no second thought and with no appeals from Brighton it looked as though danger had been adverted – until it hadn’t.

In slow motion, it was ultimately a clear decision but soft would be the word – and Brighton did not make the same mistake as Pascal Gross converted to force Liverpool to settle for a point.

It led to a feeling of frustration for Jordan Henderson, who made his return to action from a knee injury in the second half, as a decision he didn’t think “was right” ensured it felt “unfair.”

But the skipper, when talking to LFCTV, insisted moments like these bring the group closer together:

“Very frustrating, especially the way it’s happened in the last couple of minutes. Hard to take.

“It feels unfair at this moment in time and very frustrating, but you’ve got to move on and get on with it. That’s the decision that was made, even though I don’t think it was the right decision by a long way. But it is what it is. We move on and we keep going.

“I don’t think it affects us. If anything, it makes us stronger as a team. When you are going through difficult periods – whether that would be performance, results, whatever it is, and at this moment in time it’s probably injuries – it makes the group even more together and more stronger.”

It was a case of being a little more straightforward in relation to VAR and its influence on games for James Milner and Andy Robertson as they questioned when those key to the game “will have say.”

But alarmingly, Milner voiced what many are feeling in that fans “are falling out of love with the game” and that it is “clear and obvious” that there a plenty of issues to iron out.

It is welcome to see key stakeholders take a public stand, but you feel it is one which will once again fall of deaf ears to leave players and fans alike confused over the inconsistency:

The nature of the result meant it was a “bitter one to swallow” for Nat Phillips on his second Premier League outing, one which he stood up to the task in in another impressing performance:

And for Neco Williams and Gini Wijnaldum, it was one of “mixed emotions” as the win slipped away at the death but their attention swiftly moved onto Tuesday’s all-important European encounter:

It’s another bump in the road for Liverpool but Klopp’s men remain in an enviable position with 21 points to their name as after 10 games they will sit no lower than third-place dependant on results elsewhere.

With a long list of injuries and a relentless schedule, it’s a nod to their mental fortitude and one they will need to call on again swiftly as they meet Ajax on Tuesday at Anfield where a draw would be enough to seal their passage in the last-16 of the Champions League.