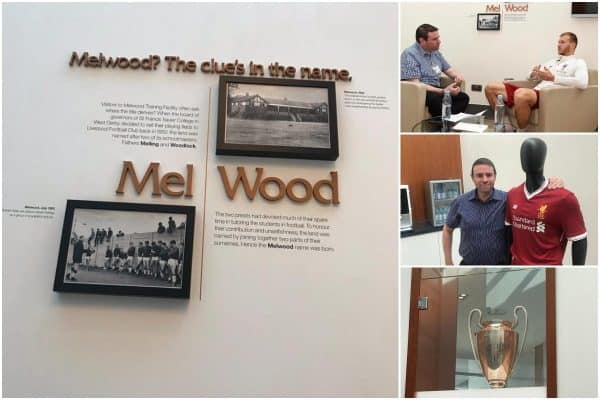 Chris McLoughlin has had the privilege of being a regular at Liverpool’s Melwood training ground for the past 20 years. Here, he shares some of his stories…

I’m not sure what the world record is for attending Melwood on behalf of different publications, but over the last 20 years I visited Liverpool’s training ground on behalf of the Liverpool Echo, Football Echo, The Kop Magazine, Anfield Confidential, Liverpool FC Matchday Programme, the old LFC (weekly) Magazine and the current Liverpool FC (monthly) Magazine.

I’ve interviewed managers, coaches and players, attended press conferences, announcements and the unveiling of new players, and spent countless hours sat in reception gazing at the European Cup while waiting for eight minutes with Joe Allen. But it’s not all glamour.

The first time I went to Melwood, I didn’t even get into the building.

It was back in May 2000 when I joined the Echo sport desk to write about the Reds for the Echo, Footy Echo and The Kop. At that time, it was also my job to write Anfield Confidential – which, if you’re old enough to remember, was an official magazine for members of the LFC Supporters Club.

Each edition featured a ghost-written column from the manager and a player interview, so I was sent to Melwood to speak to Gerard Houllier and Djimi Traore. Having not long started the job, and never been to Melwood or met Houllier before, it was one of those days when your arse speaks a thousand words.

The old Melwood building was still in place back then and, as such, it didn’t have media facilities or even a press officer based there. Instead, after explaining to the gateman I was the new guy at the Echo to get in, I had to wait outside on the raised ‘porch’ area and grab Houllier and Traore myself.

There was an old bench on that porch, the no-frills type you see in the local park, and it was sat upon it where I conducted my first Melwood interview with Djimi Traore a full five years before he was a European Cup winner with the Reds.

It went well – and I’ll always be thankful to Djimi for that – but Houllier was slightly trickier.

As I learned over the next four years, Gerard could be very abrupt with you if he wasn’t in the mood and it was one of those days when he wasn’t in the mood. I interviewed him stood on the Melwood steps as he headed out for a training session and got about three minutes with him.

Not a lot, but a start, and in keeping with the Melwood ethos on my first visit. If you want to achieve anything there, you’ve got to work hard for it.

Houllier gave us a tour

I’ve got loads of Melwood memories – some of which I might put in a book someday when we don’t have league titles and European Cups to write about – but I’ll share another story with you from when Houllier was in charge.

By the time the new Melwood (I think it was being called the ‘Melwood Pavilion’ at the time) was built and fully opened in 2002, I’d moved from the Echo to the new official LFC Weekly magazine and matchday programme. I was part of a newly-formed publishing department called Sport Media (now Reach Sport) that took on LFC as a client as the club began to expand its media output.

Houllier liked to know who he was working with by seeing them face-to-face, so he invited our entire department down to Melwood for a tour and to have lunch with himself and his staff.

After getting a full tour of the state-of-the-art facilities from the pitches and dressing rooms to the new gym and swimming pool, we sat around a set of tables arranged in the shape of a giant letter C with Houllier, Phil Thompson, Sammy Lee and a few others.

While we waited to be fed, Houllier asked our boss – the legendary ex-Echo Sport editor Ken Rogers – to introduce us all one-by-one before we each explained our role.

It can happen to anyone, but as he went around the table and got to Liverpool programme designer Colin Sumpter, Ken had a brain freeze and forgot Col’s name.

“Bloody hell lad,” piped up Sammy Lee through the laugher in the canteen, “you’ve made a good impression with the boss!”

Over a decade-and-half later, we’re still producing the matchday programme and Col continues to make an impression on Liverpool supporters with his design for the stunning Liverpool v Barcelona Champions League semi-final front cover amongst his finest work.

The nature of my job means you can end up interviewing the same players regularly over time and while some – like the current manager of Oldham Athletic – could be hard work, others – like Alex Oxlade-Chamberlain, Jordan Henderson, James Milner and Sadio Mane – are a joy to speak to.

Spending 10 minutes sat in a room alone with Xabi Alonso, just chatting about footie, was an absolute pleasure, but one man I never got to speak to at Melwood was Didi Hamann.

Whenever I was due to interview him it always got postponed because he was running late. Which was nothing personal, he was just better at tackling than time-keeping.

I tried to explain pancake day to Klavan…

It has been an absolute privilege to visit Melwood regularly over the last 20 years, especially as everyone – from the gatemen and reception to the players and management – make you feel welcome there.

There are lots of little funny things I’ve encountered over the years, like Jurgen Klopp seeing how many steps high he could jump from while walking down the staircase to reception, and former goalkeeper Alex Doni not understanding a word of English until I mentioned Stoke City.

“The basketball team!” he laughed while mimicking a Rory Delap long throw-in.

Then there was the time I tried to make smalltalk with Ragnar Klavan by explaining what Pancake Day is – turns out they don’t have it in Estonia and he looked at me like the concept is nuts – and the oddity of chatting to players in English, but then having to interview them through a translator.

For instance, Philippe Coutinho preferred to do interviews in Portuguese in case he used the wrong word or phrase in English and it became twisted in the press.

However, on one occasion when a translator was caught up with Alberto Moreno, I spent five minutes chatting about this, that and the other with Philippe in English before he ended up answering my interview questions in Portuguese. It was odd, but understandable, and he didn’t duck interviews even when he was close to leaving.

One of my colleagues, Will Hughes, found himself in an old interview room – which had a gap between the wall and ceiling – with Dani Pacheco on Valentine’s Day. While they were talking, a heart-shaped helium balloon was dangled through the gap above their heads to much amusement from a group of players outside. The matchmaker? Raul Meireles.

‘He was hiding behind the reception desk…’

On another occasion, Will was at Melwood to interview a former Reds defender who I won’t name (Ed: clue, he’s in the photo below…), but who played for the club during the last decade. He was told the player in question was waiting from him in reception, yet when Will walked into that area there was no-one around.

He was about to head back out until he heard muffled laughter and spotted a pair of feet sticking out past the reception desk. And you thought hide-and-seek was just for kids.

One of my favourite personal memories, though, will always be the first time I met a player who signed for Liverpool in 2018.

I was sat in the armchair in the Melwood reception area, with Dejan Lovren sat opposite. We’d been chatting for about five minutes when he became distracted by something behind me and was struggling to keep a straight face.

Sensing the presence of a higher being, I looked around and there, towering above me like a skyscraper – but pulling faces to put Lovren off – was Virgil van Dijk.

The big man then sat between us on the arms of the chairs, glanced at my list of questions and said ‘go ahead, ask the next one,’ before looking intently at his team-mate.

“So Dejan,” I said, knowing what was up next. “What’s it like to play alongside Virgil van Dijk?”

Which I’m sure it is, but what else could he have said?

Chris McLoughlin is the senior writer for the Official LFC Matchday Programme and LFC Magazine. You can buy them both, here.