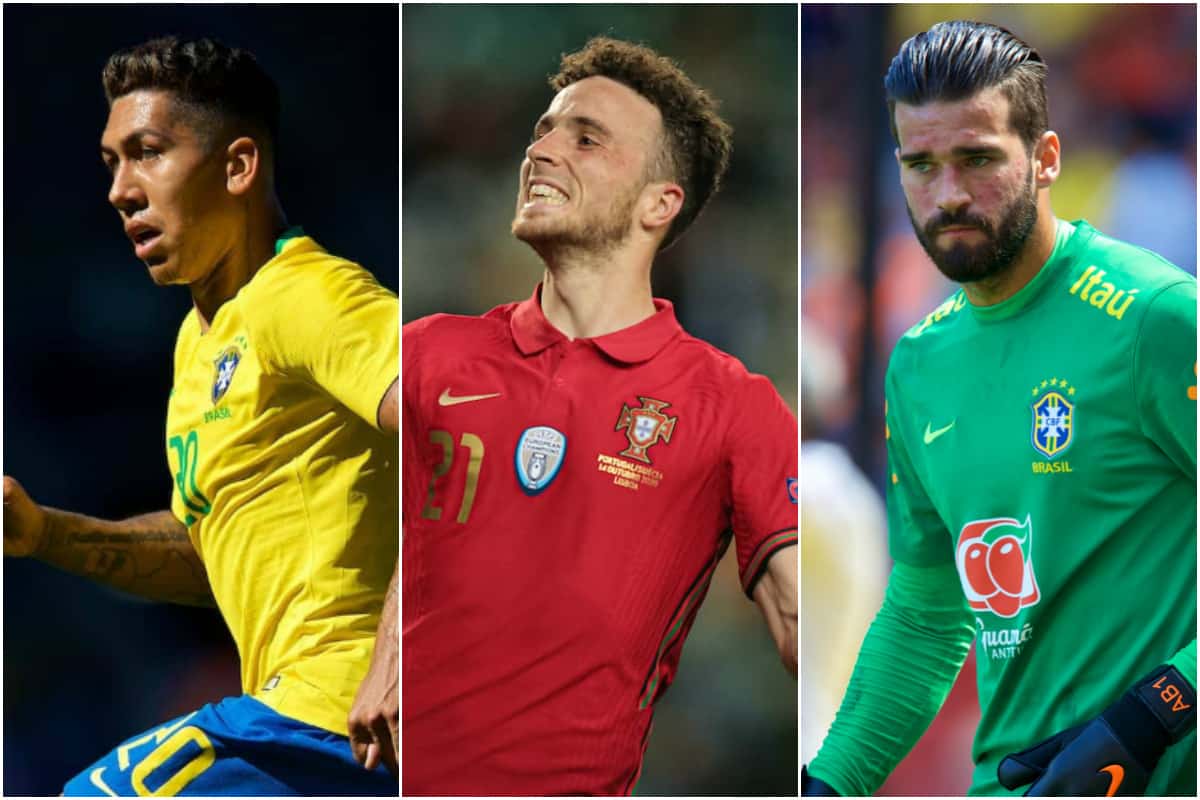 Roberto Firmino played the full 90 minutes for the second game of the international break as Brazil sealed a 2-0 win away to Uruguay, with Edinson Cavani sent off.

Liverpool’s No. 9 has a prominent role in Tite’s Brazil side, and this was evidenced as he made his second consecutive start of the month as the Selecao headed to Montevideo.

He again lined up alongside Premier League rivals Gabriel Jesus and Richarlison, in a game where Brazil’s quality shone through against a Uruguay side missing Luis Suarez due to a positive COVID-19 test.

Brazil opened the scoring through fortuitous circumstances, with Arthur Melo lining up a weak curler outside the box only for it to divert past Martin Campana and in via a deflection.

Firmino had a good chance soon after as he showed his guile in peeling off the back of the Uruguay defence, but his well-taken left-footed effort was denied by Campana.

Richarlison made it 2-0 before half-time, however, heading in Renan Lodi’s cross, with Cavani then sent off after the break following a VAR check that ruled he had dug his studs into the Everton striker’s ankle.

Uruguay had the ball in the back of the net late on, but VAR intervened again and ruled it out for offside, with Ederson keeping a clean sheet.

It was a relatively quiet night for Firmino, who played the full game again, while for Alisson it was another night on the substitutes’ bench.

While it can certainly be argued that, as Ederson was given a reprieve in October, the Reds’ No. 1 should not have been asked to travel to Brazil and Uruguay given Tite expressly stated that the Man City goalkeeper would start, the rest is nevertheless a positive.

Both Alisson and Firmino will travel back to Merseyside via private travel arrangements provided by Liverpool, and with Leicester to come on Sunday, there is plenty of time for the pair to recover and prepare to start.

Jota lined up on the right wing this time, and provided an assist for Joao Felix to make the score 2-1 after Ruben Dias had cancelled out Mateo Kovacic’s opener, though there was a clear handball in the buildup.

Kovacic restored parity soon after, but Portugal were handed a winner as Dominik Livakovic caught a high ball only to fall into Lovren in the process, dropping it into the path of Dias who converted for the victory.

Curtis Jones came off the bench as the England under-21s thrashed Albania 5-0 in their final qualifier for the U21 Euros, playing 29 minutes in a relatively free role.

The 19-year-old had a part to play in a big chance for the Young Lions as his pass saw Eddie Nketiah brought down in the box, but the Arsenal striker was unable to score his penalty.

With Switzerland’s UEFA Nations League clash being called off due to COVID-19 concerns among the Ukraine squad, Takumi Minamino was the only other Liverpool player in action on Tuesday.

He played 33 minutes off the bench in Austria, only for his side to suffer a 2-0 friendly defeat at the hands of Mexico.

Wednesday brings the final day of internationals, and it could be a quiet one with Jordan Henderson out of the England squad and Andy Robertson a doubt for Scotland, though Gini Wijnaldum is likely to start as Netherlands captain.