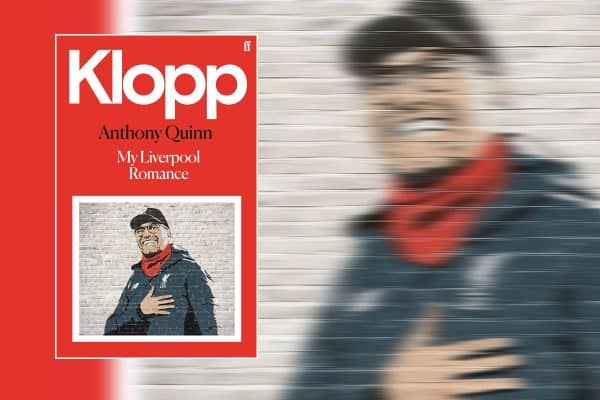 “Klopp had become an obsession” — Q&A with ‘Klopp: My Liverpool Romance’ author

Anthony Quinn’s new book ‘Klopp: My Liverpool Romance’ uniquely delves into the journey of Jurgen Klopp and his influence at Anfield. And we got the inside scoop from the author himself.

Having already immersed himself in the world of fiction and with a host of enchanting stories to his name, including The Rescue Man and Half of the Human Race, Quinn’s next literary project saw him tap into a lifelong passion that is Liverpool Football Club.

It provides a distinctive take on Klopp and his journey to the hot seat at Anfield, specifically honing in on what sets him apart from the rest – and it is not your typical biography.

The admiration, bordering on a self-confessed man-crush, for the Reds’ manager oozes through each chapter, as does the history the club has been founded on and the city it resides in.

There’s plenty to sink your teeth into and having been written through the eyes of a fan, there is an instant connection and understanding between author and reader.

And This Is Anfield spoke to Anthony to find out more about his writing process, if there were any surprises and what might be next.

What inspired you to delve into the non-fiction world, into the life of Klopp & his story at Liverpool and beyond at this point in his tenure?

A friend of mine in publishing asked me ages ago to do a book about Liverpool FC – just after Istanbul – but at the time I didn’t feel confident enough to write about footie, even though it’s a lifelong passion.

Then a couple of years back I realised that if ever I was going to write a non-fiction book it should be about Jürgen Klopp, who had become a kind of obsession. My wife’s line is “There are three of us in this marriage”, and I have to admit I’ve spent a lot of time thinking and reading about him.

Everyone can see he’s a brilliant coach and an outstanding motivator, but he’s just as plainly a fascinating man. I can’t think of anyone in sport, let alone in football, who has such a compelling personality – the sense of fun, the charisma, the articulacy (in a second language, mind), the personal integrity and public-spiritedness, it’s just deeply unusual – and, to me, hugely inspiring. What he’s done at Liverpool is extraordinary.

I honestly thought I would never see another Liverpool team win a league title in my lifetime. He’s done it in five years and grabbed a Champions League trophy plus a handful of other cups along the way.

You include a number of diary entries to help guide and ground the journey, was it a conscious decision at the time with a particular end project like this in mind?

I’ve been keeping a diary for twenty years. I started writing it mainly because I couldn’t bear to forget those great tranches of one’s life that would otherwise disappear forever, though when I reread it my reaction was: this is quite boring stuff, isn’t it? But as the years went by I came to realise how useful it could be, and I was surprised to find how much I’d written about LFC and then about Klopp.

The entries I record in the Klopp book are almost verbatim quotes, and it felt like a more immediate way to juice up the narrative. The reaction to his appointment as coach in October 2015, for instance, was overpowering excitement, and I think a diary entry can convey that more vividly than just writing “I remember being so chuffed when Klopp arrived at Anfield” or whatever.

I really did have a dream about him the night after that – and what a dream, I was actually playing for him! – which I might have forgotten about had I not written it down. So I would urge all potential writers out there to stay off social media and keep a diary instead: it might prove very handy to you in the years ahead. It’s good discipline, too.

Was there anything that surprised you about Klopp when researching and putting the book together?

I didn’t realise what a media superstar he is in Germany. I thought he was famous just as a coach at Mainz and Dortmund, but it seems he became a household name as a TV pundit during the 2006 World Cup in Germany. I wish I could speak German because when you watch Klopp doing his expert analysis you sense his great thoughtfulness, not to mention his extreme loquacity – he speaks in these long unstoppable monologues. Nobody can get a word in edgeways!

I was also surprised by the almost Jekyll-and-Hyde contrast in his temperament, between calm and intensity. When you watch him in an interview he seems very self-possessed, quite relaxed and open – the friendly side. Then you read stories about him going ballistic behind closed doors and really whipping up the passions. I suppose that’s what any good coach does, but in Klopp the switch from light to dark is marked.

I’ve never heard of him doing the ‘hair-dryer’ a la Fergie, nor does he ever throw his players under the bus a la Mourinho. Yet you pick up hints here and there that he does have a temper on him. You can see glimpses of it now and then, for instance, that interview with Geoff Shreeves after the Man City game we lost 4-0, but it would be unnatural if he didn’t blow his top now and again.

Your love of pop culture also takes centre stage and added an extra layer of entertainment and uniqueness to the discourse, is this a particular literary device you use in all your writing?

The Klopp book, as readers will discover, isn’t just about football, it’s about being a fan and about the need for heroes. I thought as a middle-aged man I was long past the stage of hero-worship. When I was a kid I was very susceptible to influences, football at first, playing it, watching it, reading Shoot! magazine and generally immersing myself in the game. As I grew older I found myself more involved in music and reading and films, because they satisfied a cerebral, inquisitive side. I think too much footie would drive you mad; it would be terrible if that was the only thing in your life.

The stuff about a particular reference to The Flight of the Phoenix came up when I was pondering Klopp’s style of leadership, with its sense of mission and entitlement. It’s that German idea of I-know-best.

Hardy Krüger plays the arrogant young technocrat who believes he can rescue this crew of hopeless oldsters and incompetents from dying in the desert, but first he has to establish his absolute authority over them. I couldn’t help thinking of Klopp and his will to win. The film haunted me for years, and I thought it might be fun transposing its central plot device into a little sketch about Subbuteo starring the young Jurgen. It amused me, anyway, and I hope it will amuse my readers.

You mentioned you sent a copy of another of your books to Roy Hodgson who returned with a lovely letter, how would it feel if Klopp were to do the same?

I wrote to Roy Hodgson about halfway through his tenure, after I heard from a writer friend that he was a big fan of literary fiction, quite rare for a football manager. I sent him a copy of my first novel, called The Rescue Man, about Liverpool in the Blitz, though its title echoed the job he was required to do at Anfield, given the problems on and off the field at that time. I didn’t expect a reply, but two days later he wrote back a very kind letter, which is reproduced in the book. I’ve since met him through a friend of mine at Crystal Palace and I can vouch that he’s one of the nice guys.

I daren’t even think about Klopp getting in touch with me. It would be like a religious visitation – I’m not worthy! I thought once about writing to him, as I did with Roy Hodgson, but just couldn’t go through with it. I wouldn’t be able to bear the disappointment if he didn’t reply.

But of course, the fantasy is that he reads the book (it has been translated for the German market), loves it and invites me to a socially-distanced dinner in Liverpool, maybe with Ulla, his missus, also a writer. He will open the conversation with the immortal words, “No writer has really got me before, but now I have read your book…” Well, you can dream, can’t you?

Do you see yourself diving into LFC more down the track as the story with Klopp & the Reds surely still has a number of chapters remaining?

Well, there will be a catch-up chapter or two when the paperback comes out next year. And I have already featured Klopp, lightly disguised, in a novel of mine called Eureka. He’s a wunderkind film director named Reiner Werther Kloss, working in London during the summer of 1967. Could I write a third book about him? I don’t know. It might be a bit obsessive, even for me.

It depends what he does next. He has never stayed longer than seven years as manager of a single club, and something tells me he might leave Liverpool once the contract is up. He’s said before that he wants to have a life outside of football. Maybe he has one big coaching job left in him…who knows?

For now, I think we should just enjoy the time that he’s here. We are League Champions. We have Jürgen Klopp, the greatest football coach in the world, and a once-in-a-lifetime character. Let’s count our blessings.

* Fans can purchase Klopp: My Liverpool Romance in hardback, ebook and audiobook here.