Most Liverpool players were outstanding in their 3-0 victory over Leicester on Sunday, but who took home the highest average rating?

The injury-ravaged Reds faced a tough task as a high-flying Foxes outfit turned up at Anfield looking to end their long unbeaten home run.

Jurgen Klopp‘s champions were on another level to Leicester, however, cruising to a resounding win and showing why they remain Premier League title favourites.

Roberto Firmino completed the scoring late in the day, putting the icing on the cake. 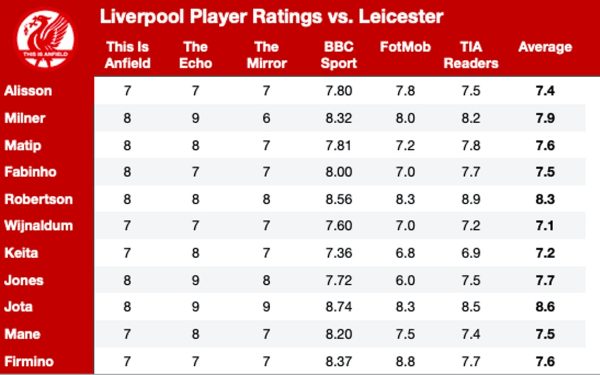 It was Jota (8.6) who was deemed Liverpool’s star man on the night, as he continues to look one of the signings of the summer.

Not only did the 23-year-old score, becoming the first-ever Reds player to find the net in his first four home league games, but his all-round game was faultless.

The Echo‘s Ian Doyle hailed Jota’s “happy knack” for being in the right place at the right time, following his ruthless header.

Andy Dunn of the Mirror felt the Portuguese “was always a danger,” also declaring that he has “made a sensational start to life at Anfield.”

In second place was Robertson (8.3), who was a marauding force down the left, crossing for Jota to score his goal.

TIA’s Henry Jackson claimed he is “the best left-back in the world” at the moment – it is certainly hard to think of anyone better.

Despite shining at right-back from the start, the 34-year-old was “even better when pushed into midfield,” according to Doyle.

Gini Wijnaldum (7.1) received the lowest average rating, but his more-than-acceptable score sums up how good Liverpool were against Leicester.

Next up for Klopp’s men is a Champions League meeting with Atalanta at Anfield on Wednesday, with the Reds looking to book a place in the knockout rounds.