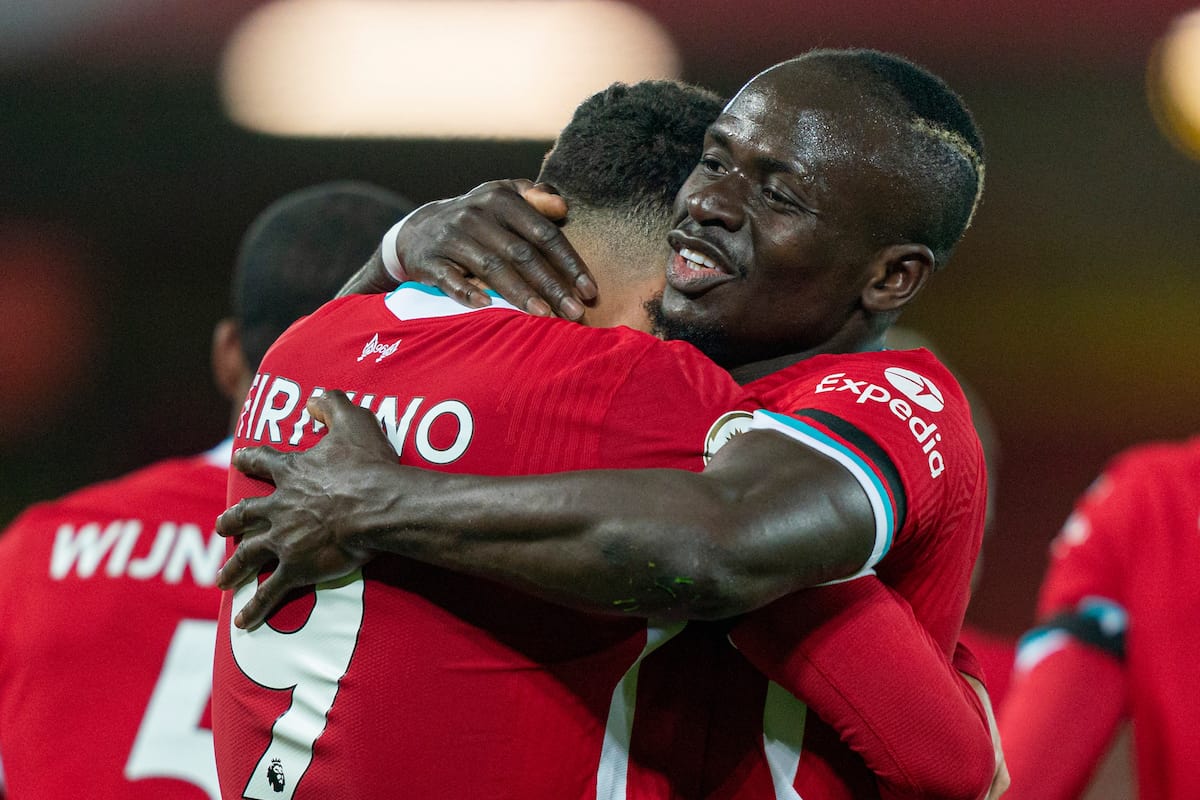 There was something startling, yet reassuring about Liverpool’s dismantling of Leicester City. It was inspirational, even.

Look at the scoreline, one which could have been far wider than it eventually was, look at the calibre of our opponents and the style of play they like to operate, then look at the list of players we are currently missing.

Without the services of Virgil van Dijk, Joe Gomez, Trent Alexander-Arnold, Thiago, Jordan Henderson and Mohamed Salah, this was a Liverpool performance that made a mockery of that ever-growing injury list; Naby Keita’s name being scrawled back on to it, having only recently been scrubbed off.

Given that Fabinho had only just returned to the team, and that Joel Matip came back just as the last international break of the year presented itself, while both Alisson and Sadio Mane have had time on the sidelines, since the season began, nine Premier League games ago, and it makes for a landscape that should have the power to flatten the plans, hopes and dreams of any team.

What is even more stunning, is that this has all unfolded during an opening quarter of a campaign in which we have faced three ‘Big Six’ clashes, two of those away from home. We have bypassed what should be our biggest challenge of the season, at Manchester City, and we have been to Stamford Bridge, from where a decent run has now emerged for the west London team.

Added to this, our trip to Goodison Park has been navigated, as have potentially tricky home encounters with not only Leicester but also Marcelo Bielsa’s Leeds United.

Across this spread of difficult fixtures, we have lost just once. At Villa Park, on an evening when Dean Smith’s side bought a lucky dip and won the jackpot.

In Europe, we’ve travelled to Amsterdam and Bergamo, returning with the spoils. 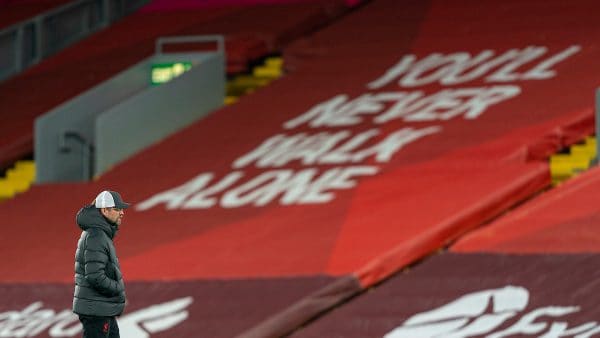 It is easy to brood about the outrageous misfortune of the injuries we’ve had to absorb so far this season. The true test is to look up from that lengthy list, to survey the possible concepts, rather than the impossible perceptions, and to move forward relentlessly once more.

For this Liverpool, for this injury-ravaged squad and their incredible manager, it all comes down to the inspiration they unlock.

They are fearless; they are organised. Skilled and expressive, there is no glass ceiling for Jurgen Klopp and his players. They can go as far a distance as their willingness and imagination will take them. They are conditioned to roll with the punches.

Strip one, two, three, four, five or six players away, no matter how important they are to the cause, Klopp takes the conundrum and he seemingly solves it. This is a rare skill. 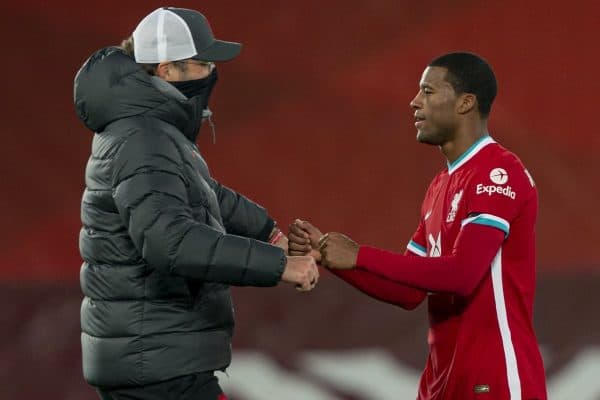 Even Pep Guardiola took to lamenting injuries as having been too disruptive an element to Manchester City’s 2019/20 campaign.

It is the way that this sense of calm authority has enveloped everybody at the club.

Look at how Rhys Williams has gone from the National League North to the Champions League with supreme ease, in the blink of an eye.

While Liverpool were ruthlessly taking a stranglehold upon the 2019/20 Premier League title, he was marshalling Kidderminster Harriers’ midtable defence against the likes of Chester, Southport and Curzon Ashton. Somewhere along the way, during that mad transition, the teenager has been made to feel immortal, by his remarkable manager.

Nat Phillips is another. A different challenge for Klopp, he has had to convince a 23-year-old who has every right to feel his senior career is suffering a slow start, that he is capable of repelling attackers of substance in the Premier League when his only other taste of league football has been a loan spell in the 2. Bundesliga, with a VfB Stuttgart side that might have won promotion, but not on the back of a water-tight defence. 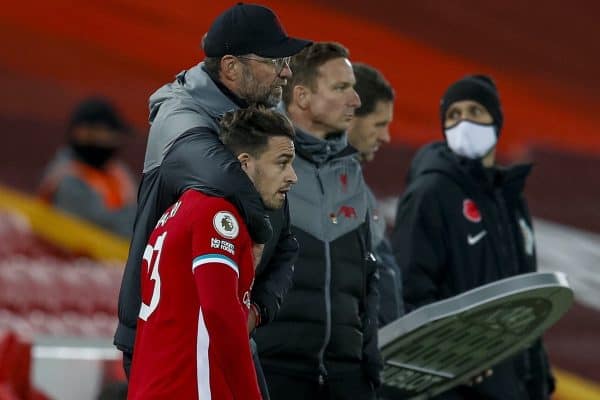 In many respects, Klopp has cast a spell on Liverpool, and the wider span of football. His inspiration has been infectious. Sworn and deadly, generational rivals have queued up to pay homage. Alex Ferguson couldn’t stop smiling, when expounding his thoughts on the achievement of Klopp and his team, at the delayed end of last season.

Other teams have wanted to grab a piece of the magic.

They sign the players we are happy to release, in the hope that some of this magic rubs off. Brighton and Hove Albion, our opponents on Saturday, were delighted to capture the services of Adam Lallana, for instance.

Not everybody goes for free, however. Look at the transfer fee that Sheffield United were willing to pay for Rhian Brewster, a player without a Premier League appearance to his name, prior to his move to Bramall Lane.

Look at how we took around a combined £40 million from Bournemouth for the signings of Brad Smith, Jordan Ibe and Dominic Solanke, or the £13.5 million we obtained from Wolverhampton Wanderers, for Ki-Jana Hoever, or the near £12m we collected for the transfer of the complicated Dejan Lovren, from Zenit St Petersburg.

These aren’t the type of transfer fees you can command for perceived cast offs, when you are ailing in midtable, treading water, without discernible direction.

No match for the Reds

When it comes to Liverpool vs Leicester City, it is usually hard to resist the temptation to compare and contrast between Liverpool’s current manager and their previous one.

Brendan Rodgers is still the best British-born manager out there. A free thinker in his own right, he is now employed by the team that arguably used his 2013/14 Liverpool as the blueprint for Premier League title success in 2015/16.

While the formations might have been different, there were great similarities in terms of the collective effort, of the trust and belief engendered. Both projects relied heavily upon the suspension of reality.

Rodgers’ Liverpool peaked in 2013/14, a season surrounded by football that wasn’t all that great if we’re totally honest about it. Leicester were the same in the seasons that bookended 2015/16.

Leicester and Rodgers are a fine match for one another, and he can achieve something tangible with them. However, they were no contest for Liverpool on Sunday night. 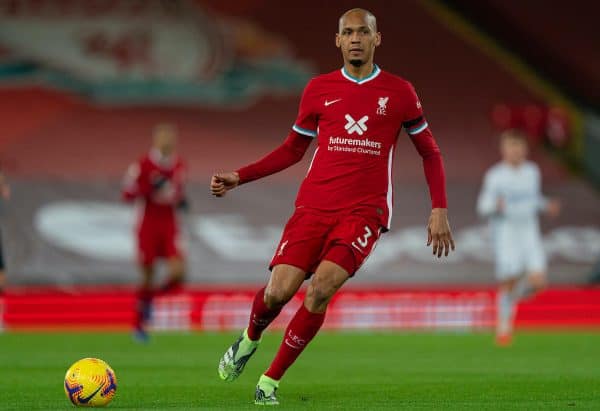 Johnny Evans broke the deadlock when he was the unassuming scorer of the opening goal, which was then followed by yet another strike from the perpetually impressive Diogo Jota, and eventually, Bobby Firmino, after what had seemed a cruel joke of a set of bizarre circumstances that kept the ball out of Kasper Schmeichel’s net.

A deserved win, with a winning margin that could have been double the size, this was a wonderful way in which to set up our run towards the turn of the year.

After picking our way past the dangers of the first nine Premier League games of the season, on paper at least the last seven of 2020 seem far more sedate, with the visits of Wolves and Tottenham appearing to be the most strenuous.

A chance to catch our breath in many ways, the trick is not taking our foot off the accelerator; the trick is taking nothing for granted.

Even with three wins out of three in the Champions League the same can be said in Europe. No loss of momentum on Wednesday against Atalanta, as Ajax lay beyond.

Stay focussed, stay ruthless and there are no limits to what even an injury-hit Liverpool can do.