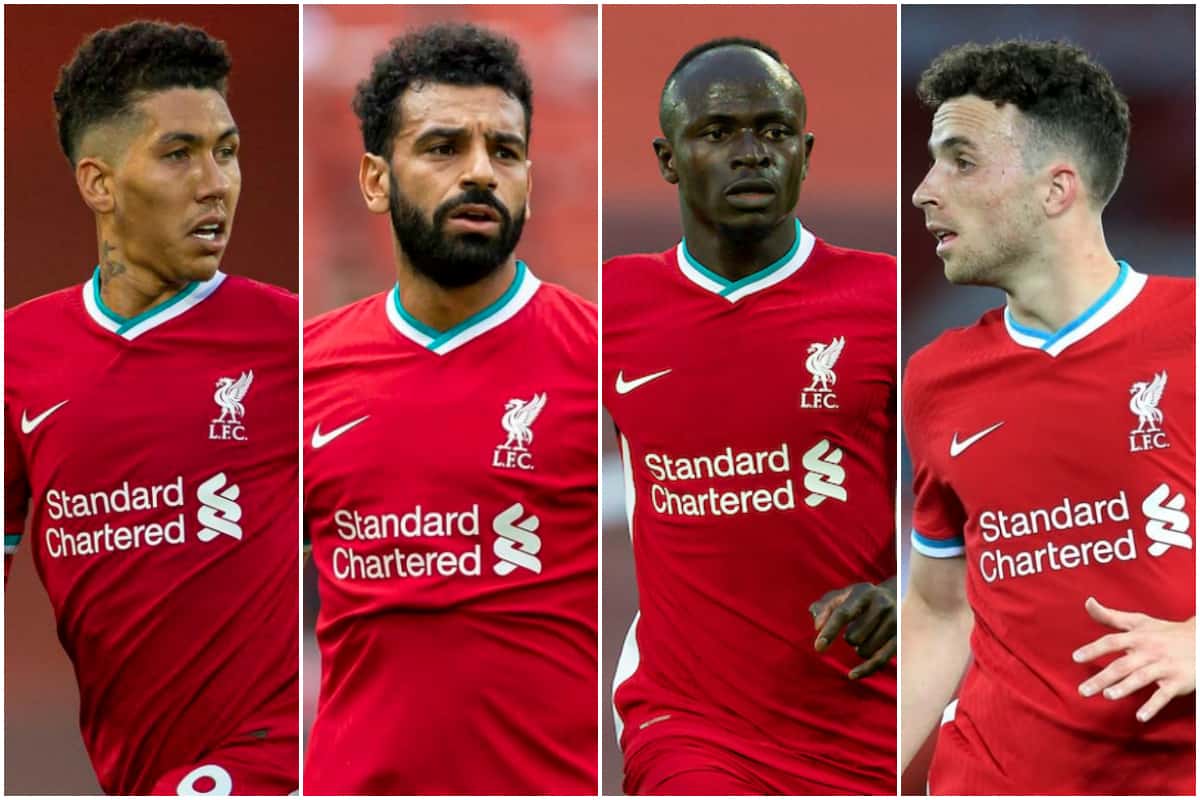 Diogo Jota has hit the ground running at Liverpool and his goalscoring form makes him a tremendous option for Jurgen Klopp – so how do we cope with a dynamic we haven’t seen at Anfield in some time?

The initial reaction is easy, obvious and tempting: Jota is scoring goals, so leave him in the team. He has won us a couple of games, so deserves to start, has to start, at the expense of whoever.

Successful teams, however, are built on more than these instantaneous decisions, and Klopp isn’t afraid of the big calls – whichever way that falls with the Portuguese forward.

Obviously, there has been a question or two to ask of Firmino of late – and ask them we did, here. Mostly, the This Is Anfield writers felt missing Atalanta could rejuvenate our No. 9 for the vital trip to Man City…though that was before a three-goal haul in Italy.

Immediately after that 5-0 win, a quick poll suggested favour had swung even more in the direction of Jota:

So what does the boss do? What could he do, what must he avoid and, on a much wider-lens view, what does this mean for the rest of the season for the Reds?

We’ve seen this over and over, at Liverpool, at other clubs, at international level: it’s commonly referred to as ‘accommodating players’.

In other words, there are too many good players to fit into the usual lineup, resulting in a couple being shifted out of position and the overall shape being changed.

Usually, it ends badly – underperformers, no options to change matters, a loss of form or effectiveness.

Unquestionably, players in this age – and certainly at Liverpool – have more tactical flexibility and positional versatility than, say, the England days of shoehorning Gerrard, Lampard and Scholes into the same team, with one at left-wing and one the defensive mid.

But still, it’s imperative to bear in mind that the strength of this Liverpool team is exactly that: the team.

An ability to work as a single, harmonious unit, on and off the ball, getting timing and tracking right in all areas of the pitch.

We’ve changed shape before, and we’ll do it again throughout the season. We’ve had all-out-attack midfields, a 4-2-3-1 with four forwards on the pitch, all manner of alternatives.

Away to Man City is probably not the situation for any of it.

Klopp has to avoid the temptation to throw all his favourites and best performers into the same lineup, and he will – he has the clear head and the Simeone-sized cojones to take whichever player out of the team he feels is best to get the result on the day, and his decision won’t be questioned (outside of Twitter with 59 minutes to kickoff, obviously).

If Firmino is in at the weekend, it’s to do the job he usually does, not because he’s a safety net or a favourite. If it’s Jota, likewise he can do the tactical job required of him, not because Bobby is suddenly obsolete.

Truly, Liverpool’s attack was the envy of Europe until some point through last season. Lightning counters, absurd work rate, speed, power, technical ability, excellent understandings – we had it all, and then some.

It fired the Reds to several big trophy wins, and none of the three ever really seemed to get injured – unless all at once for secret reasons of epicness, like against Barcelona.

But we always needed something extra, something additional. We needed, essentially, a fourth starter. Divock Origi, with all the goodwill, memories and memes in the world, is not that – but Jota is showing he can be.

Having four starters does not mean all four have to start every game. It means that you have four options to pick from without dropping the quality level.

It means having an in-game change to make without merely hoping someone steps up, but instead knowing they will.

It means the timing of game management becomes ever-more vital, with the boss picking the perfect moment to replace one hard-run forward with another fresh-legged one who can immediately tear into a tiring defence.

You can’t always just win with the starters. Late goals, resilience, mentality monsters; all the things which we shower the Reds with praise for stem from having a squad which can cope, not just the 11 which gets the result.

And more than just in-game changes, there is the form and competition aspect.

We saw Andy Robbo excel only after being told he needed to improve and seeing Alberto Moreno have his best run in the side. We saw Joel Matip step up to top-level performances, then Joe Gomez do the same after he was given a chance.

The numbers in midfield all drive each other on to perform better, to hold onto the shirt, to stay in the team.

Now we get to see that in attack. Can you imagine how good Liverpool’s forward line might be six months down the line if all three are not run into the ground on 4,000 minutes each, and know they have to perform well to stay in the side or else be sub?

It’s still Firmino or Jota, right? At this moment, for this game, it’s one or the other – the Reds must surely stick with 4-3-3 for the trip to the Etihad.

A prediction based on all logic says Firmino starts, even after Jota’s hat-trick.

Consider: this game is usually decided by the finest of margins – a late missed penalty, goal-line technology to the millimetre, Ederson racing out of his penalty area to good or bad effect. That sort of thing.

It’s such a tight fixture because we’re the best two teams, and the smallest of details decide the result more often than not.

For that to still be the case, the most likely scenario is not to put individuals in place who don’t know the tactical intricacies of positional play off the ball, who aren’t 100 percent attuned to their nearby team-mates, and so on.

Firmino knows our game inside out – in fact, he has been our game for so long.

Even if his finishing touch isn’t there, the final pass is missing or his linkup play isn’t on point, he still clearly brings the work rate, movement and space-creating to let others thrive, around him and after him.

In layman’s terms, Bobby knackers the defence, Jota has the speed of foot and thought to exploit it afterwards.

Finally, it’s worth bearing in mind the competition factor. Ever seen a striker go on a good run of form just after a rival does the same thing?

Wouldn’t be the end of the world if Firmino reacted with a brace on Sunday, would it…