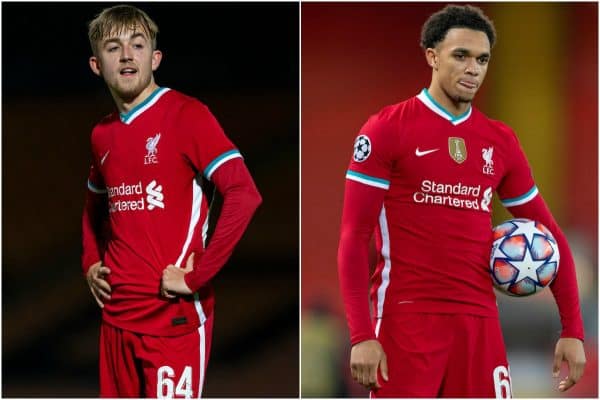 A rare chance to rotate on mass is available to Jurgen Klopp in Liverpool’s final Champions League group game at Midtjylland, where another European debut could be on the cards.

With the Reds having already secured their place in the last 16 thanks to a 1-0 win over Ajax earlier this month, this fixture represents a chance to ring the changes during what is a hectic festive fixture list.

Klopp is boosted by the return to fitness of a number of senior figures and also has a host of bright young talent to turn to in the dead-rubber.

The fixture comes three days after Liverpool’s emphatic 4-0 win over Wolves and with another Premier League matchup to contend with on Sunday, there is also scope for those on the fringe to stake their claim moving forward.

Midtjylland will have nothing but pride on the line having picked up a solitary point in the first five games, whereas the Reds can notch a club record Champions League points haul of 15 with a win.

Here’s how the Reds could lineup against the Danish side.

The option to make wholesale changes is a position scarcely available to Klopp and co. and the personnel on hand to do so has been boosted by the return of Trent Alexander-Arnold and Naby Keita.

The pair were second-half substitutes in the win over Wolves after their respective spells on the sidelines with injury, where game time here can aid in their match fitness.

And they are unlikely to be the only ones benefitting from the Reds having secured a place in the knockouts with a game to spare, with youngsters Jake Cain, Leighton Clarkson and Billy Koumetio no doubt all eager to make their debut in the competition.

With ensuring Fabinho and Joel Matip remain fit and well, Koumetio could be in the running to feature either from the start or off the bench, while the young midfield duo will be hoping to add fresh legs into a department which has been asked a lot of in recent weeks.

With the boss hinting at rotation in mind of the schedule which both precedes and proceeds this clash in his pre-match press conference.

Alisson, Xherdan Shaqiri and James Milner are still on the mend, as is Alex Oxlade-Chamberlain despite his presence in training on Tuesday, but the likes of Divock Origi, Takumi Minamino and Kostas Tsimikas are expected to feature.

With the competition allowing for an extended bench and five substitutes, Klopp could retain a number of regulars from the off with pre-planned withdrawals in mind.

This could see Fabinho partner Rhys Williams at the back, while Trent would similarly feature in place of Neco Williams – who has been present in each of the Reds’ last five matches, where he started four.

Likewise, Jordan Henderson could provide the experienced head in the middle of the park to hand Gini Wijnaldum a much-needed break, where he could be joined by Keita and Cain – in what would be the 19-year-old’s debut in the competition.

Cain has been on the bench in each of the five European games to date this season and continues to impress in the youth ranks, where an outing here would be only his second first-team appearance.

And after playing just 17 minutes against his former side, Diogo Jota would be a sensible option to turn to in attack alongside Minamino and Origi – both of whom should be eager to impress.

Finally, Adrian is unlikely to return between the sticks after recently being displaced by Caoimhin Kelleher, while Tsimikas looks to continue his bid to settle into the role of Andy Robertson’s deputy in a side that looks like this:

But it could be a case of handing debuts to three teenagers in a side defined by its youth, those on the fringe and Reds looking to get minutes back in their legs.

It could see Kelleher start his third game in succession behind a centre-back pairing you wouldn’t blink an eye seeing at the academy in Rhys Williams and Koumetio – with Trent and Tsimikas providing more experience at full-back.

While Keita continues his march to match fitness alongside two debutants in Cain and Clarkson in the middle of the park, a trio who would sit behind an attacking trident of Minamino, Jota and Origi:

With a place in the knockouts not resting on the result against Midtjylland, Liverpool have certainly earned the right to mix up the XI as they continue to work their way through injuries and a demanding schedule.

It is set to make for an interesting matchup as Klopp shuffles his pack and many will be eager to see those on the fringe selected in the XI make good of their opportunity to impress.