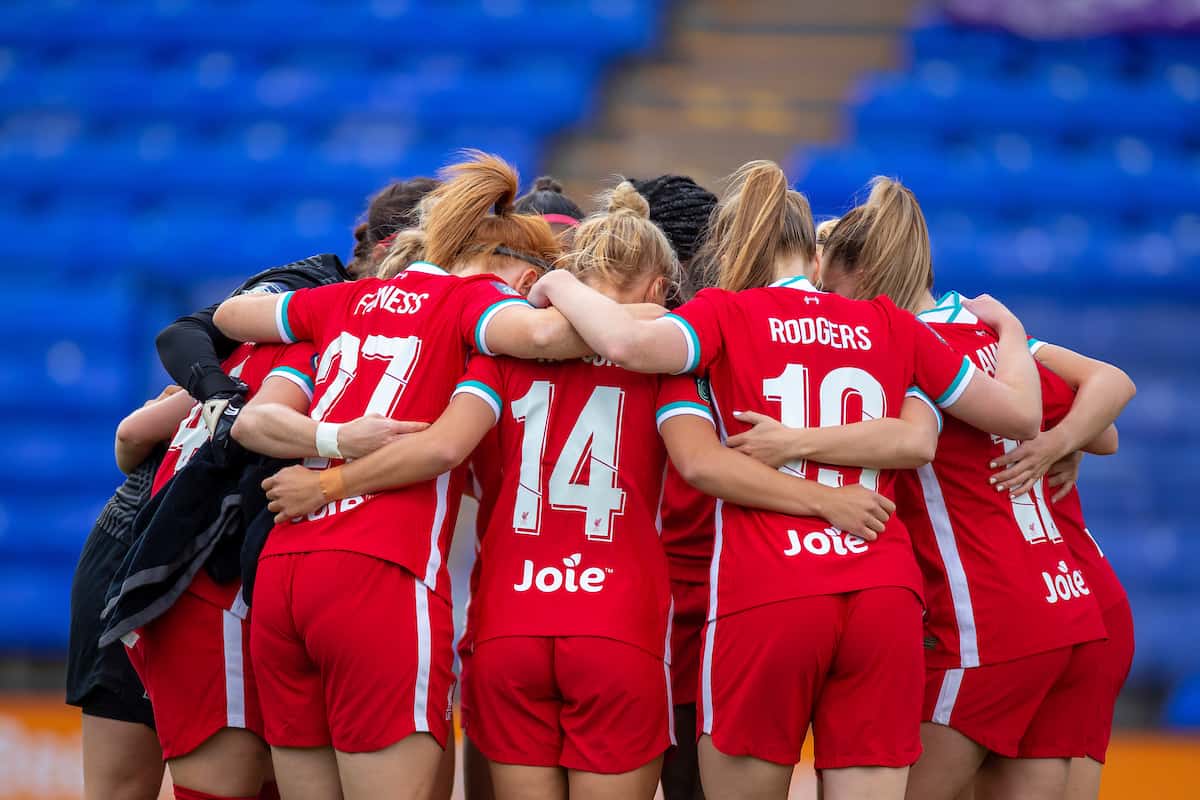 Liverpool Women have hit the halfway stage of their season, where they are still firmly in the hunt for the sole promotion spot in the FA Women’s Championship.

Vicky Jepson’s side remains in a tight tussle alongside three other clubs towards the top of the table as they look to return to the WSL at the first time of asking.

The Reds responded emphatically to seeing valuable points dropped in the second month of the campaign having picked up 10 of a possible 15 this time around as the defence stood up to the task.

They were, however, left to rue one misstep in their latest batch of fixtures throughout November and December which ensures a lot rests on their return to action after New Year.

Liverpool Women remain in third place with 11 league games under their belt and a favourable run of games to come provides an ideal opportunity to place pressure on those around them.

Here we take a look at the latest month of Liverpool’s fixtures, assess where they stand at the halfway stage of the season and what is next on the horizon. 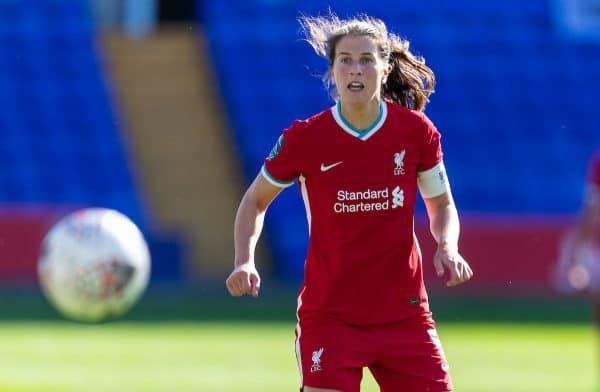 The Reds started strongly by toppling fellow promotion rivals Sheffield United thanks to a moment of magic from Rinsola Babajide, but joy was to be followed by frustration next time out.

Despite dominating proceedings at Blackburn with the goal gaping on more than one occasion, Liverpool were forced to settle for a goalless draw as the Rovers’ ‘keeper took centre-stage.

It ensured the opportunity to build on their positive result against what had been, at the time, top-of-the-table Sheffield United was lost in the first of two frustrating results in the festive fixture list.

The latter came at the close of 2020 action for Jepson’s side as second-placed Durham created a buffer between the two teams with a 2-0 win as the ball refused to fall kindly for the Reds.

Durham now sit four points ahead of Liverpool in the standings and just one behind leaders Leicester, but there were enough positive signs throughout the recent run of results to suggest Jepson’s side can claw back the deficit. 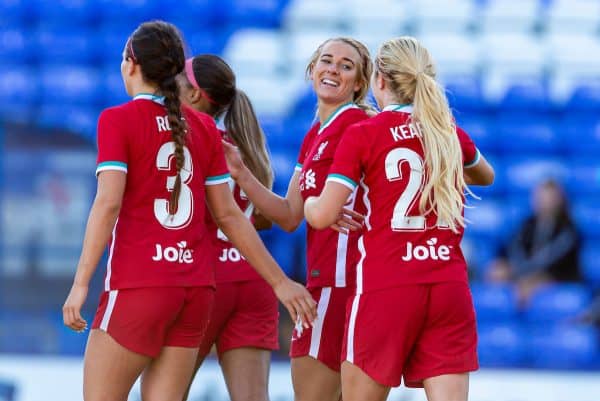 A 4-0 thumping of Crystal Palace proved to be the standout fixture in a game which also saw fans return to the stands at Prenton Park for the first time since the pandemic started.

They were given a show as Liverpool’s defence shone and three different players found the net in a clinical and dominant display, which they then crucially backed up with a 1-0 victory over London City Lionesses.

With only one league defeat in the last six games, Liverpool find themselves in a strong position but Jepson knows “our shot-to-goal ratio has to improve in the New Year” as having the most shots in the division counts for little if it doesn’t find the net.

Player of the Month: Rinsola Babajide 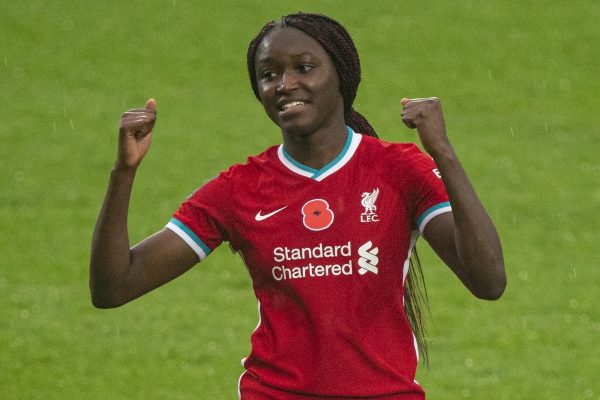 The latest batch of fixtures made for relatively good reading for the Reds and as such there were no shortages for who could be awarded the prize, with Rachel Furness and Niamh Fahey strong contenders.

But it was the lively and ever-present Babajide who came out on top after starting all six games throughout November and December with a return of three goals.

A stunning individual effort against Sheffield United was the standout moment as she twisted and turned the defenders inside out from the touchline into the penalty area before slotting home.

A double at home to Crystal Palace showed her continued growth and rising confidence but while a constant threat throughout the season to date, a ruthless edge is an area for improvement for the second half of the season.

Where Does That Leave LFC Women? 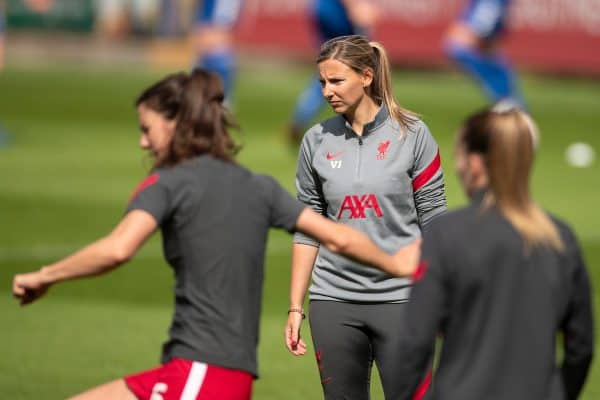 With 11 games played, Liverpool are at the halfway point of the season and sit in third place with 21 points – five behind league leaders Leicester City.

The first half of the campaign has not been without its challenges having been frustrated by the likes of Blackburn, Lewes and Durham despite being the dominant force.

While a cutting edge has been hit and miss, Jepson’s side have improved dramatically from last season where it took 10 games to find the net from open play having scored 22 in 14 so far.

Rachel Furness (six goals) and Rinsola Babajide (six) have been at the heart of the Reds’ attacking play, but on the other end of the field having shipped just three goals in their last six games, Jepson’s side have a solid foundation to work from.

But now all eyes must be on the prize as the Reds can ill afford further missteps. 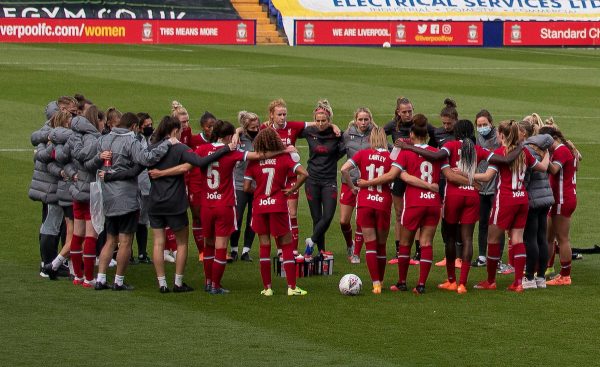 A winter break now awaits Jepson’s side before they resume their assault on the sole promotion spot in the division, with a little under three weeks until their next fixture.

And on their return, a relatively kind fixture list awaits as they meet three clubs currently occupying the bottom three spots in the table.

The other, in the shape of Leicester, presents another challenge in itself with the Foxes having set the pace in the Championship, where they are five points ahead of the Reds at the top of the table.

With only five games to follow this batch of four after the New Year, it serves as a pivotal point in the Reds’ campaign and one which they can ill-afford to slip up in should they wish to return to the WSL at the first time of asking.