Liverpool loanee Kamil Grabara has been criticised for showing a “lack of focus” with AGF Aarhus this season, with “schoolboy errors” undermining his season so far.

It came as a surprise to see Grabara rejoin AGF on a season-long loan in September, having spent the second half of 2018/19 with the Danish side before moving to Huddersfield the following campaign.

The likes of PAOK and Hamburg were touted with an interest, but the Pole ultimately returned to Aarhus, and despite having struggled after a head injury at Huddersfield, it could be considered a backwards step.

Arkadiusz Onyszko, a Polish former goalkeeper who himself spent 12 years in Denmark with Viborg, OB and Midtjylland, feels that Grabara is of that belief, pondering whether his “personal expectations were much higher.”

And in an interview with Sportowefakty, Onyszko pointed to recent mistakes from the 21-year-old – including delaying a clearance and beyond charged down for a goal in last month’s 3-1 loss to Nordsjaelland – as evidence of a “lack of focus.”

“They happen when you are not fully concentrated. When your thoughts wander elsewhere,” he explained, with Grabara also having also dropped a cross over the line in a previous Danish Cup clash with Kolding IF.

“In my opinion, Grabara found himself in a trap after the European Youth Championships in 2019.

“He played a good tournament and I suppose his personal expectations were much higher than a loan to the Championship or playing again in the Danish Superliga.”

Onyszko believes concentration is a regular problem for Grabara, who he also notes “unnecessarily put pressure on himself” with a number of outspoken social media posts when he was younger, including labelling himself the “best goalkeeper in the world” at 18.

“He is dynamic, technically well trained, has a strong character. He won’t be broken by anything,” he continued.

“But his downside is a lack of focus. You can see it in his schoolboy errors.”

However, it is of Onyszko’s opinion that though Grabara “will not make a step forward” while playing in Denmark, the relative lack of spotlight on the Superliga will at least allow him to work out his mistakes.

“It’s good that it happened to him in Denmark. There they do not make nervous decisions, they do not place the goalkeeper on the bench after a few weaker matches,” he explained.

“On the other hand, I think Kamil will not make a step forward in this league. The positive thing is that he will play regularly, and the league is watched by many scouts.” 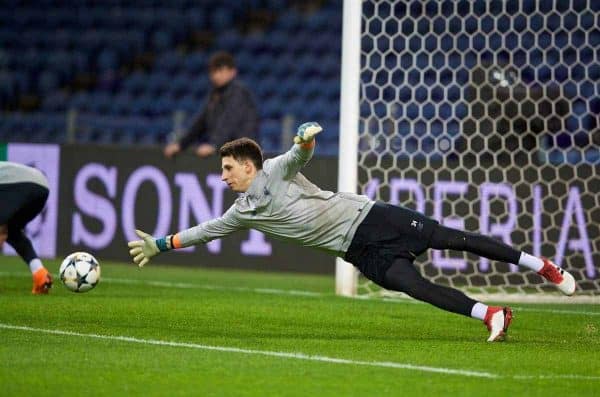 After the defeat to Nordsjaelland, Grabara admitted he was “far from his best form,” but added that “this is a problem that I can fix and I am trying to do it.”

Interestingly, Onyszko recommended the Liverpool loanee visit a sports psychologist to improve his mindset, and this is available at his parent club, with Lee Richardson having his own office at Kirkby.

Whether Grabara will remain on the Reds’ books for the long term, however, is questionable, as the deal with AGF and the goalkeeper’s subsequent form suggests there is little hope for him at Anfield.

For a long time, he and Caoimhin Kelleher vied for the gloves in the academy, but now the Irishman has taken a big step ahead while the Pole appears to have regressed.