Liverpool forward Takumi Minamino has played a bigger role of late than his first 11 months at Anfield have generally seen him do and he’s ready for more action now.

Jurgen Klopp has continually referred to the Japanese forward as an example of a player in the squad who is working hard and deserves more chances – but as the boss also notes, our forward line is a tough one to break into.

In a couple of recent games, Minamino has featured from midfield to ease the club’s massive injury backlog, but last time out he started and scored as part of the attacking trio – his first Premier League goal.

Next up on his hit list is to net at Anfield – all of his four goals so far have come on the road, with strikes at Wembley, Sincil Bank (twice) and now Selhurst Park.

He’ll be hoping for involvement at our home stadium against West Brom on Sunday, where the Reds will ideally add another victory to our long unbeaten run.

Klopp’s side have now gone 66 league games without defeat at Anfield and Minamino can’t wait until the supporters are allowed to return in greater numbers, to watch the players who feel invincible there right now.

“When we play at Anfield, I don’t know the reason, but we always feel that we can win. I don’t know why,” he told the club site.

“The stadium always gives us power. It is very sad that we can’t have [more] fans in the stadium. I hope they can come back to see our play as soon as possible.”

Having joined in January at the start of 2020, this will be Taki’s first taste of the Christmas run of matches in England while other leagues take a break.

It’s probably a nice one to ease him into what the fixtures can be like at this time of year – as Liverpool actually have a less-strenuous schedule than usual, given a full week before the Baggies clash and then another four days between Newcastle and Southampton.

Even so, Minamino is hoping that he can contribute again while players are sidelined through injury. His references to getting more chances with a few team-mates out perhaps indicate he knows his current status in the squad – and only with doing the business on the pitch can he push himself up the squad order.

“I am looking forward to it very much. Because there are two games in a week, I will have more chances to play games and I am happy about it. 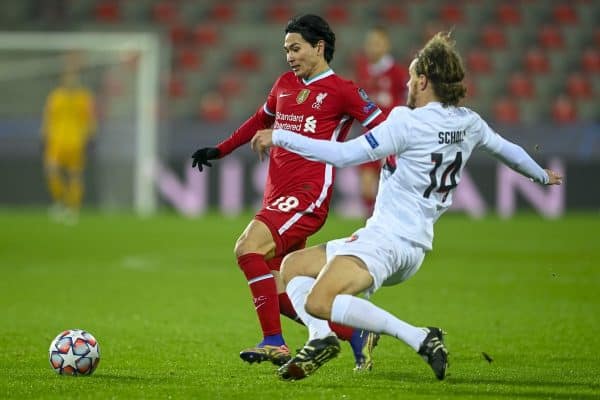 “We suffer a lot of injuries now, so a player like me needs to work harder for the team. I would like to prepare myself well and achieve a result if I am given a chance.

“Personally, when I play a game, I will give 120 per cent and do my very best. For the team, we would like to win as many titles as possible.”

With four goals from only 676 minutes this season – or one every 169 mins – he’s certainly doing his best when the chances come his way and maybe a sustained run in the side, whether starting or off the bench, will kick-start his attempts to become a more established player at Anfield.

Netting his first home goal against the Baggies would be a great way to do that!