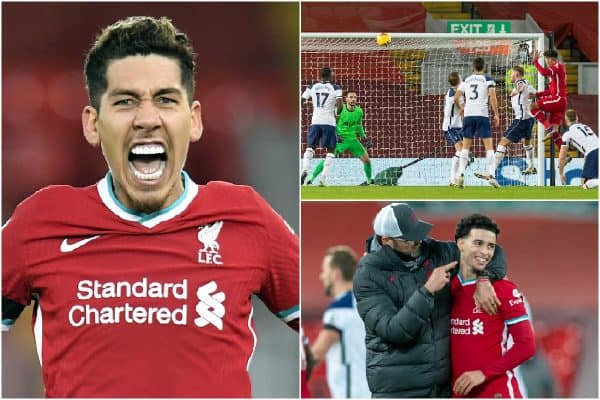 Liverpool beat Tottenham 2-1 in a dramatic Anfield encounter, in what could be such a vital win come the end of the season.

The Reds hosted the Premier League leaders on Wednesday evening, with Jose Mourinho’s side only clear of the champions on goal difference.

On a night when the late Gerard Houllier was remembered by the 2,000 fans inside Anfield, Liverpool cooked up a win dripping with the drama of Everton away under the Frenchman back in 2001.

Banners were out in force before kickoff in tribute to Houllier, following his extremely sad passing at the age of 73 on Sunday.

The players also remembered the former Liverpool manager, partaking in a minute’s applause…

It was Mohamed Salah who gave the Reds the lead in the first half, finding the net in rather fluky fashion, as the ball looped past Hugo Lloris.

The Egyptian was subsequently congratulated by the magnificent Curtis Jones…

Premier League debutant Rhys Williams was also hugely impressive, as he managed to keep Son Heung-min quiet for much of the game.

It was Son who equalised for Spurs, however, pouncing on the counter-attack, before a dramatic, quality-laden second half unfolded.

With a draw looking nailed-on, Roberto Firmino rose highest to power home a header in the 90th minute, in what will go down as a memorable late Anfield winner.

Instead of his usual eccentric celebration, Firmino went wild with joy, racing to the Kop end to bask in the glory in front of the supporters.

Once the final whistle blew, there were scenes of further happiness, as the likes of Fabinho, Andy Robertson and Klopp all showed their delight at what was a massive win.

It was a fantastic performance from Liverpool, and a thrilling game, with attention now turning to Saturday’s trip to Crystal Palace.

“The Reds are top of the league….”